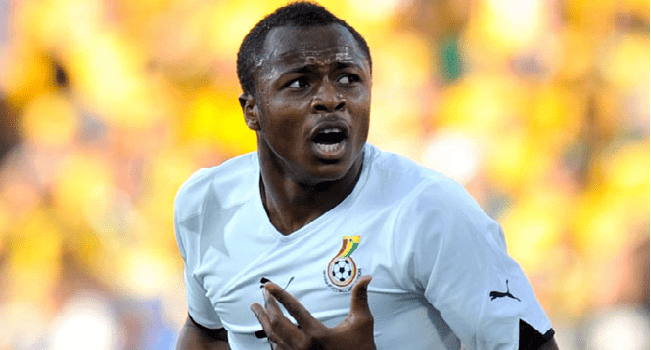 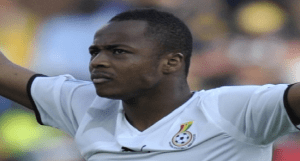 Ahead of the Africa Cup of Nations AFCON 2015 final match that is to hold at the Bata Stadium on Sunday, the Ghanaian team are optimistic of the outcome.

Andre Ayew, the Ghanaian forward has vowed that the Ghanaian team will fight to win Sunday’s AFCON final match against Cote d’Ivore for the whole of Ghana.

The Ghanaian forward has shone in this competition, scoring three goals but he insisted it was the result of the confidence he has enjoyed both from his teammates and the coach.

“I have tried to raise my game because I have been given responsibilities both on and off the pitch. It is due to the group and the confidence from the coach,” he said.

He also blamed inexperience for the Black Stars loss at the 2010 AFCON final to Egypt saying that 14 players had been brought from the U20 World Cup and the team was in the final after three months of the tournament where they were attacking, but couldn’t score.

Ayew said, “I remember the red coat my father wore (sitting on the sidelines in the 1992 final). My father is a Ghanaian and so I want to win this cup for all Ghanaians.”

Ghana last won this competition in 1982 with Andre’s father, the legendary Abedi ‘Pele’ Ayew, one of the top stars from that triumph in Libya.

Ten years later, Ayew senior could not play another Africa Cup final after he picked up a second yellow card against Nigeria in the semi-final and Cote d’Ivoire went ahead to beat the Black Stars 11-10 on penalties after a goalless 120 minutes of action. “When you get to the final, you need to do everything to win the trophy,” he said.

Ghanaian Black Stars Captain, Asamoah Gyan, returned to training in Bata on Saturday ahead of the AFCON 2015 final against Ivory Coast.

Gyan did not join his colleagues during the team work out, but trained separately with physical trainer Jamie Lawrence due to his health status.

Gyan must pass a late fitness test to make Avram Grant’s starting line-up for the final against Ivory Coast.

The 29-year-old missed Ghana’s AFCON 2015 semi-final against Equatorial Guinea due to a hip injury he suffered against Guinea last Sunday.

Avram Grant, the black star coach also said that reaching the final of the AFCON tournament is as important to him as reaching the UEFA Champions league final.

“For me, I do not rate any final as the best; it’s a good achievement we have reached with these guys and all Ghanaian should get behind the team,” he said.

The former Chelsea boss took charge of the West African giants three weeks to CAF’s flagship competition, but has managed to reach the final of the competition.

The Foreign Minister’s office has condemned the act by South Africa as Nigerians among other West African citizens were deported for not having the ‘Yellow Card’or were falsified.

Immigration expert and analyst;Olumide Ohunayo reacted to the ‘Yellow Card’controversy.

Eager to ward off a looming diplomatic row between Nigeria and South Africa over the deportation of 125 Nigerians from South Africa on Friday, the House of Representatives has summoned Minister of Foreign Affairs, Gbenga Ashiru, to appear before it on Tuesday.

Chairperson of the House of Representatives’ committee on foreign affairs, Nnenna Elendu-Ukeje, says the country is concerned with growing maltreatment of Nigerians in foreign countries, calling the latest deportation of 125 Nigerians, over the alleged failure to provide genuine yellow fever vaccination documentations, a grave insult.

“The outcome of the meeting will shape our next line of action as a parliament in our foreign policy direction and relationship with these countries. We cannot allow these insults on our citizens and country continues unabated’’ she said.

The permanent secretary, ministry of foreign affairs, Martin Uhomoibhi said the ministry was surprised at what happened in South Africa.

“These Nigerians have legitimate visas, and the yellow card was part of the packages that needed to be cleared before they are given visas,” he said.

Mr Uhomoibhi said another question that his ministry is seeking answer is “why those who travel from here to South Africa who are South African not get the same treatment with or without yellow card?”

He said the ministry is already in dialogue with the South African authority to resolve the issue as soon as possible.

The deportees, 75 who had arrived via South African Airways (SAA) and 50 passengers coming in with Arik Air, had been returned to Nigeria hours after their arrival on Thursday, including some who had visited the country several times before.

The mass deportation has frayed relations between both countries, with Arik Air announcing that it was suspending flights to South Africa for the time being.

Adebanji Ola, head of communications for the airline, said the decision to suspend flights between the commercial hubs of both African countries “was taken due to the ongoing dispute between international airlines operating in Johannesburg and the Port Health Authorities over Yellow Fever documentation being presented to authorities at OR Tambo International Airport by passengers”.

The passengers were denied entry into South Africa when Port Health authorities claimed that the batch numbers on the vaccination documentation provided by the travelers had been incorrect.

“Arik has reached the conclusion that the irregular and obfuscating nature of this protocol is having an impact on its passengers and does not wish to proceed with operations into a country where its customers are at risk of detainment or any other measures meted out arbitrarily by the authorities,” the company said in a statement.

Group CEO/President of Arik Air, Dr. Michael Arumeni-Ikhide, said while he had been informed that the “current crack-down is not unique to Nigeria and its inbound passengers”, he is determined to take a stand to “show the Port Health Authorities we are simply not prepared for our customers to be treated in this manner”.

Mr. Tope Awe, spokesperson for South Africa Airways assured that the national carrier had made concerted efforts to avoid deportation of Nigerians.

He said the airline had gone to great lengths to authenticate the vaccination documents, but had been unable to do so; the country’s government had insisted that the deported passengers had failed to meet Port Health criteria and as such must be sent back to Nigeria.