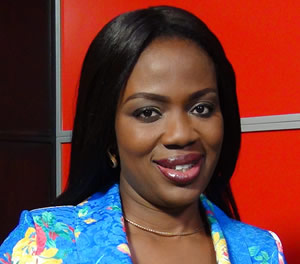 Oriyomi Mary Otaigbe is a Broadcast Journalist and Senior Reporter/Presenter with the award- winning Channels Television.

Aside from the coverage of other topical subjects, Yomi has been passionate in reporting Health issues and Policies for over a decade on the domestic and international scenes including the coverage of the meeting of World Health Assembly, the decision-making body of the World Health Organization in Geneva, Switzerland.

Yomi has covered numerous public health challenges and was in the thick of things during the Ebola outbreak in Nigeria in 2014. She reported on preventive measures and activities from the Ebola Emergency Operation center located at the Central Public Health Laboratory Building in Yaba, Lagos, the First Consultant Medical Center, Obalende and other areas where News came from until Nigeria successfully contained the disease.

Yomi Otaigbe holds a HND,Upper Credit in Mass Communication from The Polytechnic, Ibadan and she is also a graduate of Broadcast Journalism from the New York Film Academy.

To continue to operate in the dynamic world of journalism, Yomi has attended several trainings on television programme production and reporting by the British Broadcasting Corporation (BBC), the Cable News Network (CNN) the Voice of America ( VOA) and other conferences and trainings both within and outside Nigeria.

In the course of doing her job, she has won several awards including the Red Ribbon Award for best television feature on HIV/AIDS back- to- back in 2009 and 2010; The Nigeria Institute Of Medical Research Media Award For Medical Research Reporting and From the New York Film Academy in conjunction with Delyork International, She won the Future Voice Of Nigeria award. She was also nominated for the Nigeria Healthcare Excellence Award.

Yomi Otaigbe is a fellow of the Health Writers Association of Nigeria and the Network of Reproductive Health Journalists, Nigeria. Born in Lagos, She is from Ogun State, South-west Nigeria and married with three children.