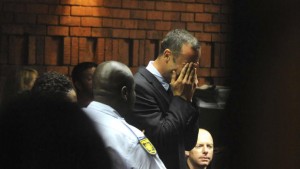 Oscar Pistorius vomited in court on Monday as he heard a pathologist’s testimony about the nature of his girlfriend’s injuries after he fatally shot her.

The repeated vomiting caused the judge to briefly delay the proceedings and ask the athlete’s lawyer to attend to his client.

Pathologist, Gert Saayman, who performed the autopsy on the body of Reeva Steenkamp told the court that his girlfriend was shot three times, in the head, hip and arm.

The judge had earlier banned live broadcast of the post-mortem examination testimony on Monday due to the gruesome content. Twitter messages and blogging were banned as well.

The testimony included a description of bullet wounds Steenkamp suffered to her hand, hip, arm and head when Pistorius shot her through a locked bathroom door in his house the night of February 14, 2013.

Prosecutors accuse the amputee Olympian of murdering Steenkamp after an argument but Pistorius, who admitted shooting, says that he mistook her for an intruder.

The runner has pleaded not guilty to charges of murder, recklessly discharging a firearm and illegally possessing ammunition.

Pistorius faces a life sentence if convicted of premeditated murder.