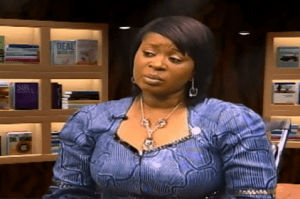 On this edition of the programme, the First Lady of Ogun State, Mrs Olufunsho Amosun, introduced her new project, the first National Green Essay Competition, hinged on her first book, Green Education for the Youth.

Mrs Amosun holds a Masters degree in guidance and counseling from the University of Lagos and has worked as part of a Loss Adjustment Team in Barclay’s Financial Services and New Prudential Insurance Company which were both in the United Kingdom in the 1990’s.

Olufunso Amosun has contributed immensely to the socio-economic development of the less privileged in Ogun State in various capacities.

She is the founder of UPLIFT Development Foundation. “UPLIFT”, is an acronym for Understanding People’s Limiting and Inhibiting Factors Today.


Also, Joshua Awesome, spoke about his adventures, books and life.

Awesome is a high performance consultant, coach, columnist, compère and adventurer. He was an anchor on the Nigerian Television Authority (NTA) for over half-a-decade.

He is the founder of Motivational Speakers Network (MSN) Nigeria.

Joshua’s last climb of Mountain Kilimanjaro was in honor of the late Dr. Nelson Mandela.