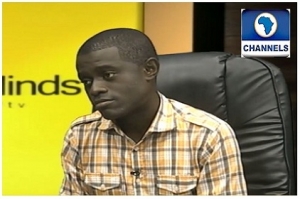 A social commentator, Joachim Macebong, says the visit of the Pakistani Child’s Right activist, Malala Yousafzai, to Nigeria to support the call for the rescue of the over 200 girls abducted by members of the Boko Haram sect was helpful because of the attention it drew to the issue.

There have been several reactions raised by the visit after the Nigerian President, Goodluck Jonathan, decided to schedule a meeting with the parents of the abducted girls, a meeting critics said was long overdue.

On a Channels Television’s programme Rubbin’ Minds, on Sunday, Macebong said that Malala’ visit rekindled the feelings of people over the abducted girls’ issue which was almost loosing relevance because of the crisis in the Middle East.

“People now remember that there is this unresolved issue that has not come to a conclusion,” he said.

On the possibility of finding the girls, Macebong said that there were no easy answers at the moment.

He stressed that the inability of the government to secure lives and property in Nigeria led to the abduction of the girls, a development he said would continue if the government failed tackle the challenge.

Macebong said that scheduling the meeting three months after the abduction of the girls was awkward and not acceptable in the African setting.

Impeachment Of Governors, Price For Lack Of Control

On the impeachment of governors in some states in Nigeria, Macebong said it was a target on areas where larger numbers of members of the State House of Assembly were from the Peoples Democratic Party.

The governors of Adamawa and Nasarawa States are of the opposition All Progressive Congress.