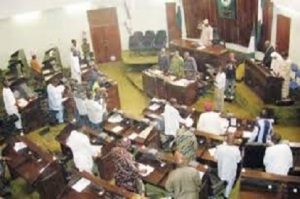 The APC faction of the Edo State House of Assembly, has declared vacant, the seat of Abdulrazaq Momoh, representing Etsako Constituency 2.

Speaker Igbe also directed that the lawmaker should be evicted from his official quarters and also return his official car.

It was recalled  that the House suspended four lawmakers, on allegations of gross misconduct, about two months ago.

Three of them were those who defected from the APC to the PDP and the fourth suspended lawmaker is the Deputy Speaker of the House who is a member of the APC.

The Majority Leader of the House, Philip Shaibu, had also alleged that the lawmakers were suspended for trying to induce others with 50million Naira each to impeach Governor Adams Oshiomhole and the Speaker, Uyi Igbe.

However, the lawmakers debunked all allegations. A High Court, had ruled that the lawmakers  could be suspended, but that their seats could not be declared vacant.