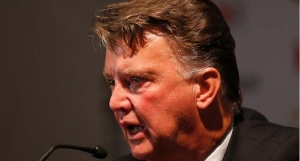 Louis van Gaal has suggested that injuries are to blame for Manchester United’s struggles this season, insisting he would not step down.

The under-pressure Dutchman has seen his team fall 10 points behind leaders Leicester City and out of the top four after recording just two wins in their last 10 league games.

Speaking ahead of the team’s FA Cup clash at Derby County, Van Gaal seemed to absolve himself of any blame, saying he is not responsible for the numerous contact injuries suffered by his players.

His defiance comes despite United’s current points total of 37 points from 23 games being their lowest in the Premier League era.

Meanwhile, Manchester City forward Kevin De Bruyne will be out of action for about 10 weeks with ankle and knee injuries.

De Bruyne was taken off on a stretcher in the closing stages of City’s Capital One cup semi-final second leg win over Everton.

It was initially stated by the player’s representatives that he would be out for six weeks but De Bruyne himself has now confirmed that he will be out for longer after visiting a specialist.

‘It’s Over’, Guardiola Rules Out Return As Barca Boss