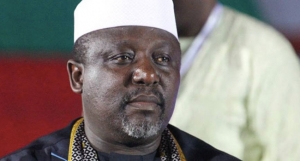 Governor Rochas Okorocha of Imo State has condemned in strong terms the recent attack on residents of some rural communities in Enugu State, southeast Nigeria.

The Imo State Governor described the act perpetrated by some group of unknown gunmen suspected to be Fulani herdsmen as ‘very barbaric and unfortunate’.

At a meeting with some traditional rulers on Wednesday in Owerri the state capital, he said that the recent attack in Enugu State was inhumane and totally unacceptable.

The Governor urged the Federal Government through the security operatives, to immediately bring the perpetrators of such evil act to book.

He appealed to the traditional rulers in all the communities in Imo State and southeast Nigeria to take absolute control of security in their various autonomous communities.

Governor Rochas Okorocha also tasked them to ensure peaceful coexistence between their people and residents from other areas, adding that Nigeria presently needed absolute peace in the face of its several challenges.

Expressing optimism that President Muhammadu Buhari would tackle the present security challenges caused by the herdsmen, he called on the people of Enugu State and the entire Southeast region to remain calm, as drastic measures were being taken to curb the killings.

President Buhari had in a statement by his spokesman, Garba Shehu, unreservedly condemned the attack on Ukpabi Nimbo and other such acts of extreme violence against communities in other states of the Federation.

He instructed the Nigerian Armed Forces and Police to take all necessary action to stop the killing, saying that ending the recent upsurge of attacks on communities by herdsmen reportedly armed with sophisticated weapons had become a priority on the government’s agenda for enhanced national security.