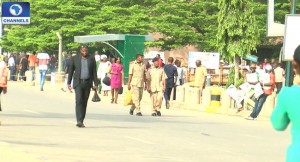 Nigerian workers are joining their counterparts from all over the world to celebrate the International Workers’ Day, also known as Labour Day in some places, but commonly referred to as May Day in Nigeria.

The celebration is holding amidst request by labour unions in Nigeria for an increase in the wages of workers.

The Nigeria Labour Congress (NLC) and the Trade Union Congress (TUC) had on April 27 proposed 56,000 Naira (about $281) as a new minimum wage to the Nigerian Government.

The unions made the proposal at a press conference held in Abuja, the nation’s capital.

The President of the NLC, Mr Ayuba Wabba, told reporters that the unions made the formal demand on the proposed national minimum wage to the Federal Government on Tuesday.

“I can say now authoritatively that as of yesterday (Tuesday) we made a formal proposal to the Federal Government of 56,000 Naira to be the new minimum wage.

“The demand has been submitted officially to the government and we hope that the tripartite system to look at the review will actually be put set up to look at it.

“Our argument is that, yes, it is true that the economy is not doing well, but the law stated that wages for workers must be reviewed after every five years.

“So, the issue must be looked into by the Federal Government and workers should not be seen as sleeping on their rights,” he said.

May Day is a celebration of labourers and the working classes that is promoted by the international labour movement, socialists, communists and anarchists and occurs every year on.

The date was chosen for International Workers’ Day by the second international, a pan-national organisation of socialist and communist political parties, to commemorate the Hay Market Affair, which occurred in Chicago May 4, 1886.

The 1904 International Socialist Conference in Amsterdam, the sixth conference of the second international, called on “all social democratic party organisations and trade unions of all countries to demonstrate energetically on May 1 for the legal establishment of the 8-hour day, for the class demands of the proletariat, and for universal peace.