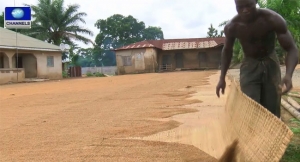 The Nigerian government has established a National Rice and Wheat Task Force to set up targets that will yield comprehensible and self-evident results in rice and wheat production.

Professor Osinbajo said that feeding the nation’s population was the focus of the Buhari administration.

“Rice and wheat is our main focus, and making sure that in one year we can show the world that we are serious,” he stressed.

Emphasising on the need to develop strategies to rejuvenate the whole value chain, he gave terms of reference to the panel.

The panel is to set up production targets for rice and wheat in the participating states, determine the scope and particulars for government support needed towards the attainment of the set targets and consider and proffer the best off-take and marketing arrangements that will encourage maximum effort among farmers  and millers.

They are to also determine the rice and wheat value chain deficiencies and recommend solutions for addressing them, mobilise farmers and millers in identified target states to engage the Central Bank of Nigeria Anchor Borrowers’ Programme and other available support facilities and establish timelines for the delivery of goals set by the Task Force.

After the Vice President listed the terms, the Chairman of the Task Force and Governor of Kebbi State, Mr Atiku Bagudu, thanked the Vice President for the consideration and stated that the disconnect between farmers and millers must be addressed.

He added that the two bodies in the value chain needed to be mobilised for maximum results.

A statement by a spokesman for the Vice President, Laolu Akande, said members of the task force include Governors of Kebbi State Senator Abubakar A. Bagugu, Dr. A. U. Ganduje of Kano State, and Mr David Umahi of Ebonyi State.