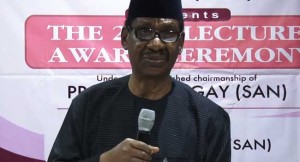 The Chairman of the Presidential Advisory Committee on Anti-Corruption, Professor Itse Sagay, has re-emphasised the need to set up a special court whose jurisdiction is limited to a set of crimes.

Professor Sagay made the call at the 2016 lecture of the National Association of Judiciary Correspondents in Lagos State, Nigeria’s commercial capital.

He blamed legal practitioners and the judicial system for long delays in the prosecution of a number of corruption cases in the country.

“There is justifiable frustration in this country about the (apparently) ineffectiveness of the prosecution of corruption cases.

“People will cite the fact that cases that started since 2007 have not been concluded (while) some are in suspense (and) we’ve even forgotten about others.

“It’s not a very encouraging picture,” he said.

Professor Sagay said that his committee has been advocating special courts for the prosecution of financial crimes, as well as devised a new guide for prosecution.

“We have established a new manual for prosecution. The manual that gives the prosecutor and the investigator a step-by-step process towards an efficient and effective prosecution.

“We will establish a special court with special judges, whose jurisdiction is limited to a set of crimes,” he said.

Two Farmers Killed During Clash With Herders In Ekiti

Vaccination Of Buhari, Osinbajo In Pictures