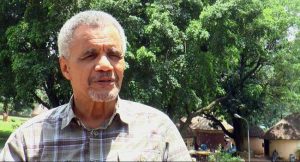 Passionate about both environmentalism and music, Desmond Majekodunmi has brought the two together to unite Nigeria behind a movement he hopes will see his fellow countrymen and women slip on their planting gloves.

As well as farming and producing your environmental radio show, you have been doing a bit of rapping recently. What was it all about?

It was a song I wrote a long time ago, and I put it on the back burner, but somehow the song came up, and one of the ladies who works with us said ‘we have to record that’, so it has been released. The kids loved it.

Where has it been playing?

On several social media platforms, it has been on network television, network radio, national radio, national TV. We had a big tree planting day in July, so it was to assist the government in sensitizing people to the issue.

You made it with children, so what do you tell them about trees to get them interested? You should plant trees because…

The main thing we say is the most essential commodity they require to stay alive, and could not survive without for ten minutes, primarily comes from trees – oxygen. Sometimes we ask people ‘can anybody hold their breath for ten minutes?’ but nobody has managed yet, and I don’t think they will. I wouldn’t want them to try for ten minutes anyway! And then we talk about water, about the rain relay.

Can you explain that?

It has been pretty well certified that rain rarely falls more than 150 miles from the body of water from which it originally evaporated – be that a sea or a lake. And it is the transfer evaporation process – particularly of the trees in the forest that helps the promotion of the rain. Then we talk about the food and medical aspects and ask ‘isnt’t it nice to sit under a tree and commune?’

And how did the children respond? Could they relate to what you were telling them?

Totally. They loved it. They all planted, they took it seriously, they understood that trees give us life. That is what we are really trying to do, is to get it across to the children. The little girls in particular liked the ideas that the trees provide a home for birds to live in.

How did it go down with adults?

It got some interesting reactions. I don’t know how many trees were planted as a result, but at least we got some good reactions. We did it on my radio program and people were saying ‘yeah, we can’t do without our trees, we love our trees,’ and we say ‘oh, by the way… the only buffer between us and catastrophic, we emphasize the word catastrophic, climate occurrences is going to be massive, massive, massive reforestation.’

That is the only way to slow things down for long enough for us to get our heads around the reality that we need to decarbonize. It makes sense. So why aren’t we doing something like massive tree planting to try and secure the future of the children we profess to love?

The United Nations is saying seven billion trees in the next ten years. It’s not nearly enough, but it’s a good target. It has to be on a scale that you declare an emergency. Somewhere like Nigeria – and this is what I am trying to promote – we didn’t cause the problem, but we have the solution to the problem. There is nothing wrong with declaring a state of emergency and getting everyone out there, and get this thing going. Big time!

Desmond Majekodunmi is an outpoken environmental activist, a farmer, film maker and musician. He is also CEO of Lufasi Nature Park. This month his efforts to get more trees planted were acknowledged with an award from the Ministry of Environment in Lagos.