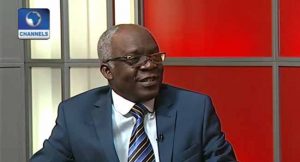 As reactions have continued to trail the ownership of funds recovered in an apartment in Ikoyi by the EFCC, Legal Practitioner, Femi Falana (SAN), believes that Nigeria is being exposed to unprecedented ridicule before the committee of nations.

“For me, Nigeria is being exposed to unprecedented ridicule before the committee of nations, if criminal elements, former public officers and departments of government are competing to hide American Dollars, millions of dollars, in private apartments or dump sites, we are in trouble.”

Meanwhile, reacting to the fact that the National Intelligence Agency (NIA) had laid claims to the cash, Mr Falana urged the government to act transparently and consciously on such matters because according to him, any other agency can equally come up and lay claims to discovered funds, saying that they were from covert operations.

“If care is not taken and if this explanation is accepted by the government, you could just forget about the whistle-blowing policy.”

“What stops another agency tomorrow if you call on the EFCC or the ICPC, or even the office of the Attorney General, saying we have stumbled on money somewhere, can you go there? – What stops them from coming on to say, sorry, that is our money from covert operations?”.

He, however, predicted that the Attorney General would likely advise the agency, saying: “If you are sure that you can substantiate your claim to the ownership of the money, go to the Federal High Court and file a counter affidavit”.

Meanwhile, in response to whether or not he feels the EFCC knows the owner of the money, he said: “It goes beyond going to explain to the President, which in fact is an embarrassment – If after two years, the President as the Commander in Chief of the Armed Forces of the country, was not made aware of this covert operation, I think we are in trouble”.

Furthermore, in response to speculations as to whether or not the discovery of funds was a cover up, Mr Falana stated: “There is a procedure to know whether it is a cover up or not and that position must be followed by the government.

“I read yesterday that the President has referred the matter to the office of the honorable Attorney General for investigation, I think the matter has left that stage.

“Under the Money Laundering Act, once a suspected proceed of crime has been taken to court as in this case, the Federal High Court on the basis of the application of the EFCC, has made an order of interim forfeiture of that money, it is no longer a matter for the presidency”.

He, however, noted that what is important is the fact that the Presidency is just being briefed now, a situation which he feels is more than meets the eye – “It’s embarrassing,” the lawyer asserted.