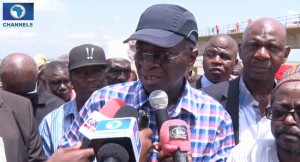 Nigeria’s Minister of Power, Works and Housing, Mr Babatunde Fashola, has promised the completion of the 30 megawatts Gurara Hydropower plant in Kaduna, in 2017.

Speaking to journalists during an inspection tour of the project, Mr Fashola stated that the additional power from the hydro-power plant would boost efforts to stabilize power supply in the country.

The Minister told the reporters, “all the lines are already built as you can see.

“We are waiting to complete the substation where energy passes through and can be redistributed from.”

Hinting that an approval came after a Federal Executive Council meeting, he said “we should finish early next year at the latest.”

“The place is supposed to evacuate power from here through to Kaduna and Mando substations and also to Kudenda substation, to connect this to the Kaduna Power Plant”, he said.

Furthermore, he praised the efforts of the Federal Government in increasing power generation, saying that with wind power being developed in Katsina as well as the Gurara, Shiroro and Kashimbila Hydro-power projects, the nation’s energy mix would “slowly come together”.

17 Killed, 14 Injured As Truck Head Goes Off Trailer In Katsina