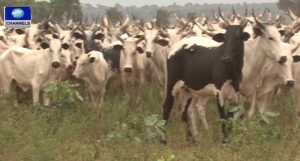 Security operatives attached to the ‘Operation Yaki’ security outfit in Kaduna State, have recovered over 300 cows and other animals stolen by rustlers in various parts of the state.

During the handover of the recovered animals to their owners, a spokesman for the Governor, Colonel Yusuf Yakubu, told reporters that the animals were stolen from herdsmen and later recovered from the rustlers at two villages in Kachia Local Government Area of the state where they were hidden.

Colonel Yakubu explained that the recovery was made possible through intelligence information from members of the public.

He says the operation is part of efforts by the state government to curtail armed banditry, insurgency and other related crimes in the state.

According to him, the recovered animals were being handed over to their owners after thorough scrutiny.

He applauded the contribution of security operatives in ensuring that activities of rustlers and other criminals were reduced to the barest minimum across the state.

He also added that security agents in the state had so far recovered over 17, 000 cows since the government began efforts to rid the state of cattle rustlers over a year ago.

The outfit had set up collation centres for the recovered animals in Birnin Gwari, Zaria, Kachia and Jere.

Colonel Yakubu said: “Recently, there were two operations conducted by our operatives. The first operation was conducted in October 2016, which recovered 95 animals. Then the second and third operations were conducted on the 28 and 29 of the same month where we recovered a total of 312 cows.

“This operation was conducted by our Sector one of Operation Yaki which comprises Nigerian Army, Police and the Navy that are in Kachia.

“The information that we got from people led to the successful operation. We most especially commend the leadership of Miyetti Allah in Kaduna state, they are doing a good job, they led us into this operation and we made these recovery”.

The North West Chairman of Cattle Breeders Association of Nigeria, Ahmadu Sulaiman, commended the security agencies and Kaduna State government for their commitment to rid the state of cattle rustlers.

17 Killed, Several Others Wounded As Bandits Villages In Katsina