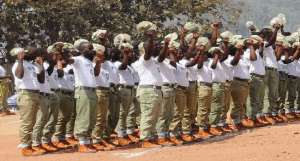 A female member of the National Youth Service Corps (NYSC), identified as Miss Elechi Chiyerum, has been confirmed dead after she was found ill at the orientation camp in Kaiama, Kolokuma-Opokoma, Bayelsa
State.

Miss Chiyerum, 27, from Rivers State, reportedly arrived at the camp with an illness that made her bleed and vomit.

She was a graduate of Ignatius Azuru University of Education, Port Harcourt and was reported to have been found vomiting at her lodge.

She was said to have arrived the camp ill as she could not participate in most activities lined up for the opening ceremony.

An official of the NYSC, who spoke with Channels Television’s correspondent and asked not to be named, described the unfortunate incident as a case of non-disclosure of an ailment.

A source revealed that when the deceased was found vomiting and bleeding, she was immediately taken to the sickbay in the orientation camp. After the initial treatments, the doctors found her case to be severe and referred her to a hospital in the state capital.

“She was taken to a hospital in Yenagoa. Unfortunately, before getting to the hospital she died. She died at about 9:00 p.m., having spent only five days at the camp. We are pained and shocked by the news of her death,” the source said.

An NYSC official who confirmed the incident advised corps members to always disclose their true health conditions to the authorities.

Miss Chiyerum’s death came a day after the death of another corps member in Kano was reported.

It was a tale of tears, agony and regrets on Thursday in Osogbo the Osun state capital, as Ifedolapo Oladepo was buried.

Like many thousands of young graduates mobilised for the 2016 Batch ‘C’ service year, 26-year-old Ifedolapo Oladepo, a first class Transport Management graduate of the Ladoke Akintola University of Technology, Ogbomosho had said her goodbye to her family members, set for Kano, hoping to see her dreams fulfilled.

However, exactly a week after, it was her corpse that was brought to her family after she was said to have died following complications arising from an ailment few days into the NYSC orientation programme in Kano.