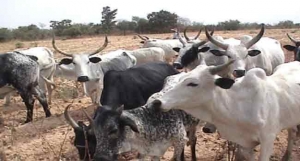 The Niger State Police command has recovered over 500 cows from some cattle rustlers and arrested 15 suspects in Lapai local government of the state.

The command’s spokesperson, DSP Bala Elkana, in an interview with Channels Television, disclosed that the police on the strength of information, raided the criminals at Pongu Daji, in Lapai.

He then assured citizens that the force would sustain the tempo of making the state free from all kinds of criminality.

Elkana added that two double barrel guns, 124 rustled cattle and 36 sheep, were recovered during the three-day operation, where a notorious kidnapper and cattle rustler, who had escaped in Zamfara state, Alhaji Muhammadu Umaru, was also arrested with members of his gang.

The police boss, then stated that the case was under investigation and suspects would be charged to court as soon as investigation is completed.

The Lapai local government Chairman, Usman Mohammed, Legal Adviser to Miyetti Allah Kautal Hore, North Central Zone, Barrister Abubakar Isah and the Vice President, Miyetti Allah of Nigeria, Hussaini Yusuf, all expressed appreciation to the force for the achievement, while calling for the identification of the rightful owners and immediate release of their cattle.

They assured the police of their support in curbing the menace of kidnapping, cattle rustling and armed robbery, while expressing regret for the Fulani’s involvement in the crimes they were not known for in the past years ago.

The Vice President noted that the national body of the association, would soon embark on a sensitization of its people down the state and local levels on the resistance of the bad habits, while urging the youths to stop the trend.

Meanwhile, the prime suspect, Umaru from Anka, Zamfara State, in an interview, denied being a kidnapper or a cattle rustler, stating that the cows belonged to him and his junior brother.

Lamenting over the injury inflicted on them, he equally denied being in possession of dangerous weapons as alleged by the police.

#JusticeForUwa: Today I Rise In Solidarity With Women – Tinubu