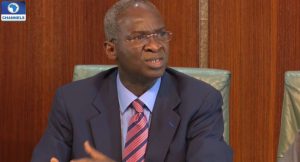 The Federal Government says it will ensure that electricity is restored to nine local government areas in Ondo state, which have been experiencing total power outage for almost five years now.

The Minister of Power, Works and Housing, Mr Babatunde Fashola stated this while on a facility tour of Omotosho Power Plant located at Okitipupa Local Government Area of Ondo state.

The residents of these areas have been disconnected from the national grid for the last five years by the Benin Electricity Distribution Company, BEDC for alleged indebtedness.

The BEDC, completely cut off Okitipupa, Odigbo, Irele, Ese-Odo and Ilaje Local Government areas of southern senatorial district of Ondo State, five years ago, from the national grid due to high indebtedness by majority of residents in the area.

This has led to collapse of small and medium scale businesses while many of the residents had relocated from the affected areas to other places within and outside the State where there is access to power.

But the Minister of Power, Works and Housing, Mr Babatunde Fashola during his working visit to the state described as unacceptable a situation whereby several communities would be put in total blackout for years due to the failure of some residents to pay their electricity bill.

The minister said he had directed that the management of the BEDC be summoned for urgent deliberation on how power would be restored to consumers who were not owing the DISCO.

Mr Fashola who expressed happiness that there was relative improvement in gas supply to Omotosho power plant which had enhanced the contributions of the plant to power generation in the country, said the host, Omotosho community would start enjoying electricity before the end of next month.

Speaking Earlier on behalf of the affected communities, the Chairman of Okitipupa Local Government, Pastor Larry Ogunmusere told the Minister that residents had contributed huge sum of money for re-connection but pleaded with the government to prevail on BEDC to restore power to the communities.

Conducting the minister round the power plant, the Managing Director, Omotosho Electric Energy Company, Engineer Sam Ishekiri explained that the 500 megawatts Omotosho power plant was currently contributing over 300 megawatts to the national grid, due to an increase in gas supply in recent time.