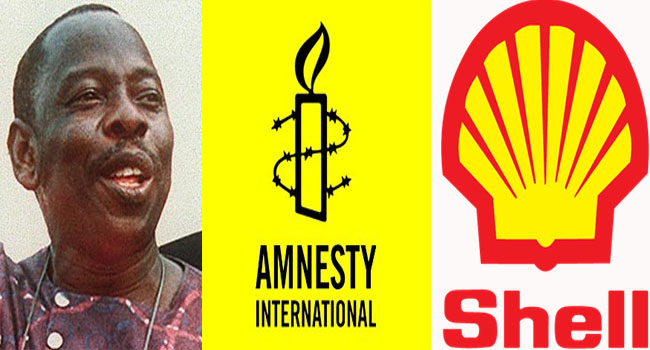 The widow of Dr Barinem Kiobel, one of the nine Ogoni activists executed in 1995 by the General Sani Abacha-led military government, has filed a case against oil giant, Shell for alleged complicity in the execution of the activists.

Amnesty International said in a statement that the latest case in the Netherlands by Mrs Esther Kiobel revealed details of the alleged role Shell played in the executions.

“The executions of the Ogoni Nine shocked the world. Shell has been dodging accountability for its complicity in these deaths for more than twenty years but now, thanks to Esther Kiobel’s determination and bravery in taking on this corporate Goliath, the past is finally catching up with it,” Senior Director of Research at Amnesty International Audrey Gaughran, said.

“Today is a watershed moment in Esther Kiobel’s uphill battle for justice. Shell has to answer for the bloody footprints it left all over Ogoniland,” he added.

Amnesty International also said the executions were the culmination of a brutal campaign by Nigeria’s military to silence the protests of the Movement for the Survival of the Ogoni People (MOSOP), led by Ken Saro-Wiwa.

According to the statement, MOSOP had claimed that others had grown rich on the oil that was pumped from under their soil, while pollution from spills and gas flaring had “led to the complete degradation of the Ogoni environment, turning their homeland into an ecological disaster.” In January 1993, MOSOP declared that Shell was no longer welcome to operate in Ogoniland.

In January 1993, MOSOP declared that Shell was no longer welcome to operate in Ogoniland.

“Shell encouraged the government to stop Ken Saro-Wiwa and MOSOP, knowing this was highly likely to result in human rights violations being committed against them. Shell had plenty of evidence that the Nigerian Military was responding to the Ogoniland protests with abuse,” said Audrey Gaughran.

“Just weeks before the men were arrested, the Chairperson of Shell Nigeria had met with then-President, General Sani Abacha, and raised “the problem of the Ogonis and Ken Saro-Wiwa”. This was not the first time Shell had engaged with military and security forces to frame the Ogoni protests as a “problem”. Shell also repeatedly reminded the authorities of the economic impacts of the MOSOP protests,” Amnesty International added.

Shell was however quoted to have denied all allegation insinuating its involvement in the killings.

“The allegations cited in your letter against Shell are false and without merit. Shell Nigeria did not collude with the military authorities to suppress community unrest and in no way encouraged or advocated any act of violence in Nigeria. We have always denied these allegations in the strongest possible terms.”