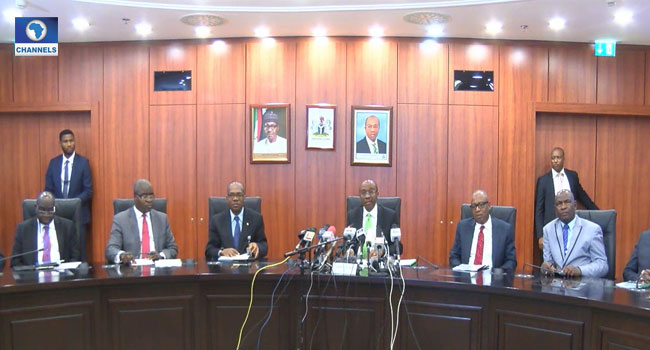 Amidst news about Nigeria’s exit from recession, the Central Bank Governor (CBN), Godwin Emefiele has called for the implementation of policies that will sustain Nigeria’s economic growth due to the fragile state of the growth.

This call was made during the Monetary Policy Committee (MPC) bi-monthly meeting on Tuesday.

During the meeting, the CBN Governor said the committee applauded Nigeria’s exit from recession but the growth needs to be sustained as it is fragile.

“Committee applauded the exit of the Nigerian economy exit from recession but observes that the growth remain fragile and therefore hopes that complimentary fiscal and monetary policies would sustain the growth momentum.”

Also, the MPC during the meeting opted to leave the interest rates unchanged and focus on the slow economic growth in spite of the country’s exit from recession.

Due to the need to encourage liquidity of Nigeria’s economic system, the MPC retained the basic interest rate at 14 percent.

Emefiele during the meeting said the MPC is satisfied with the Federal Government’s directive that all state governors should pay outstanding salaries.

He said, “MPC also noted with satisfaction, the directive of the Federal Government to all states to promptly pay outstanding salary arrears in order to boost aggregate demand.

“It commended efforts to clear outstanding contractor arrears, prompt settlement of trade disputes with certain unions of organized labours, including the Academic Staff of Universities (ASUU) and health workers, as well as the of money to settle outstanding entitlement of the extra workers in defunct Nigerian Airways.”