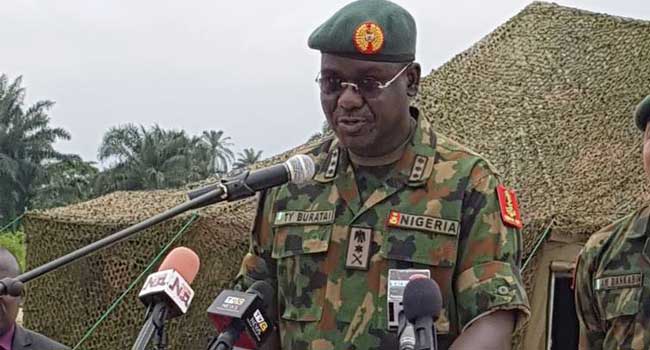 The Chief of Army Staff, Lieutenant-General Tukur Buratai, has ordered an immediate investigation into allegations of soldiers on truck drivers.

A statement from the Director of Army Public Relations, Brigadier-General Sani Usman on Sunday said the COAS gave this directive in order to keep up with the professionalism the Nigerian Army is known for.

According to Usman, a concerned Nigeria took to his twitter handle to accuse the military officers of extorting money from trucks along the Maiduguri-Gamboru Ngala road, Borno State, North-East Nigeria.

The twitter user further alleged that each truck owner paid N300,000 for escorting trucks, thereby leading to the complacency of the troops.

“The Nigerian Army has noted with great concern about an allegation of complacency and extortion against soldiers by someone with twitter handle called “Danborno” on Social Media.

“He alleged long queues of trucks along Maiduguri-Gamboru Ngala road, Borno State He also alleged that each truck owner pays the sum of N300,000.00k to soldiers for escorting them.

“Consequent upon this, the Chief of Army Staff, Lieutenant General TY Buratai has ordered for immediate investigation over these allegations,” Usman said.

While frowning against acts of indiscipline on any soldier, the army spokesman said the military leadership would not tolerate any act of misdemeanour by any of its personnel.

He also called on members of the public, especially residents of the state to further avail the military of useful information that will aid its operation.

To this end, any aggrieved member of the public could lodge a complained through a toll-free line on 193 to report any observed lapses or allegation against any officer or soldier.

Attahiru Was On The Verge Of Making Nigeria Proud – Buratai