What began as a normal busy Monday morning in the Magodo area of Lagos state soon turned chaotic, when a Gas station exploded.

Two persons were feared dead as a result in a fire outbreak from Second Coming gas plant situated along the CMD road of the state.

The fire was allegedly as a result of gas leakage from one of the trucks in the compound.

It was said that a vehicle with a faulty exhaust drove past at that period, thereby resulting in the sudden explosion.

Many people were injured following the fire purportedly spreading to other properties in the neighbourhood.

As the flame could be seen from as far as a kilometer away, men of the Lagos state fire service were said to be the first responders on the scene as they are seen battling the inferno head on.

This popular gas station, situated in a residential estate has been the destination for cooking gas users around the area.

Meanwhile, on the perimeter fence of the gas station we sight 2 bodies lying motionless on the ground. The bodies are visibly burnt, most likely a result of the gas explosion. They are said to be people who take refuge after dark in 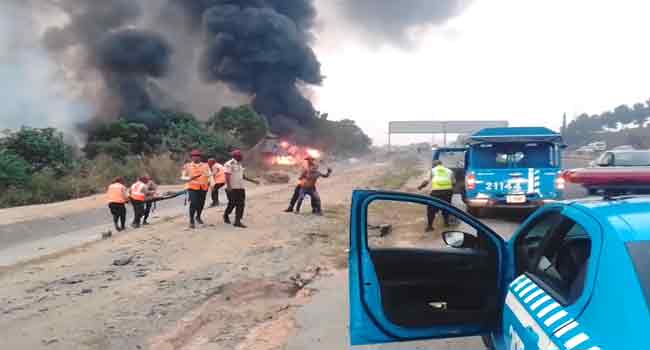 The Director of Fire Service, Mr Rasak Fadipe, explained that the concerted efforts of his team prevented the fire from causing more damages.

He said, “Initially when we arrived here, we responded very promptly and there was no outbreak of fire. We were inside the tank premises but unfortunately, when a vehicle was passing along, this is the reason why we must listen and take to instructions at every scene of emergency.

“A vehicle was passing along, it was through the exhaust pipe that caused the explosion. And that was how the fire started.

“It was a very serious fire, what you see here is concerted efforts of all emergency responders in the state or else the whole of Magodo would have been in flames.”

Why We Ordered Release Of Sowore, Dasuki – FG

Ensure Your Source Of Information Cut Across, Buhari Tells US Envoy