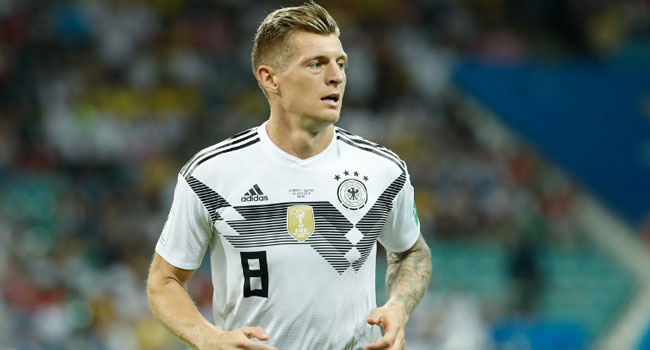 Toni Kroos says Germany are relishing the chance for redemption following a woeful World Cup campaign as they prepare for crunch Nations League matches away to the Netherlands and France.

“Those games sound good to the ear and we hear the ringing of six points,” quipped the Real Madrid midfielder.

A goalless draw against France in Munich last month leaves Germany second in Group One of the Nations League, three points behind leaders France.

Having finished bottom of their group in Russia following a shock defeat to South Korea, victories over the Dutch in Amsterdam on Saturday and against the French next Tuesday in Paris would go a long way in helping coach Joachim Loew repair the damage to his hitherto unblemished reputation.

Kroos insists “three games at the World Cup will not change what we’ve been building for years”, although claiming six points over the coming days should help ease the pressure on Loew, who has faced criticism in the German media.

On Thursday, former Germany star Michael Ballack said he was “surprised” the 58-year-old Loew had kept his job after the World Cup debacle.

“Maybe he wanted to take over…,” Kroos replied tongue-in-cheek to Ballack’s comments as he jumped to Loew’s defence ahead of the coach’s 168th international in charge on Saturday.

“New stimuli can also come from a coach who has been involved for a long time,” insisted Kroos, 28.

“He (Loew) asked himself after the World Cup whether he can still perform to his best.

“I think he deserves the chance and I think we will sort ourselves out with him.”

Nevertheless, the away matches in Amsterdam and Paris present a huge challenge.

As assistant coach Marcus Sorg put it “in the Nations League, you can’t afford a defeat, then you don’t have matters in your own hands any more.

“That is an incredibly high demand.”

Manchester City winger Leroy Sane, a surprise omission from the World Cup squad, is set to start on the left flank with Loew’s first-choice Marco Reus missing with a knee injury.

Injuries elsewhere have forced Loew to make further changes. Kevin Trapp, Antonio Ruediger, Leon Goretzka, Kai Havertz and Reus have dropped out of the original 23-man squad and been replaced by Emre Can, Serge Gnabry and Bernd Leno.