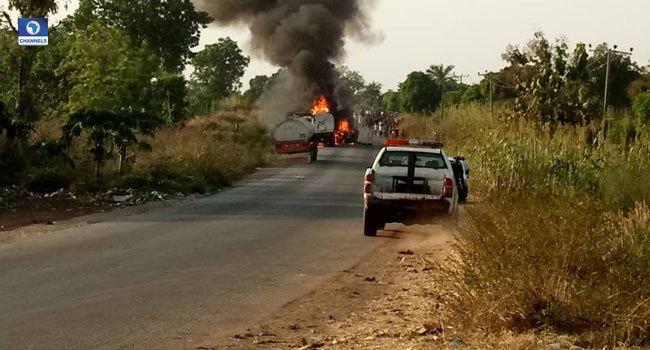 Motorists were stranded on Thursday as a tanker carrying diesel exploded along Lafia-Kadarko road in Nasarawa State.

Although there was no record of any casualty, a number of cows were however roasted in the unfortunate inferno involving the 33,000-capacity truck.

Following the development, officials of the state fire service battled hard to put the fire under control and prevent it from escalating as another tanker was parked behind the burnt one.

As at press time, clearance operations were ongoing to ease traffic and give motorists a sigh of relief as a result of the gridlock.

The Nasarawa tanker explosion comes two months after a gas plant was caught up in flames in Lafia, the state capital.

At least nine were confirmed dead while others were severely burnt in the incident as efforts to quench the fire proved abortive.