Atiku Lands In Abuja After US Visit

Former Vice President and presidential candidate of the Peoples Democratic Party (PDP), Atiku Abubakar, has returned to Nigeria after a two-day trip to the United States.

The aircraft conveying the former vice president touched down at the Nnamdi Azikiwe International Airport in Abuja at about 3:00pm on Saturday.

READ ALSO: Atiku Leaves US For Nigeria Ahead Of Presidential Debate

But Atiku alighted from the plane almost an hour after it landed. 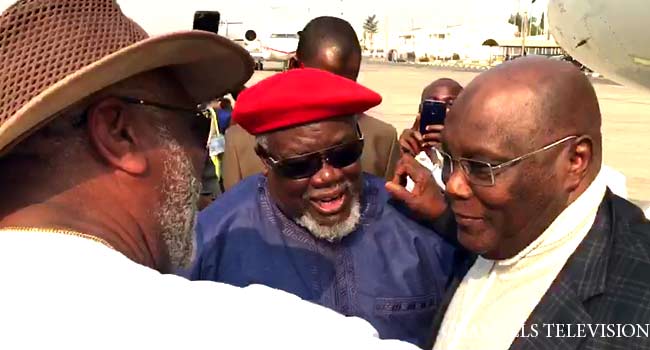 He was received at the airport by leaders of the opposition party, including former Cross River State Governor Liyel Imoke and former Foreign Affairs Minister Tom Ikimi among others.

The PDP presidential candidate was accompanied to the US by the Director General of PDP Presidential Campaign Council and Senate President, Dr Bukola Saraki, as well as Senator Ben Murray-Bruce, among others. 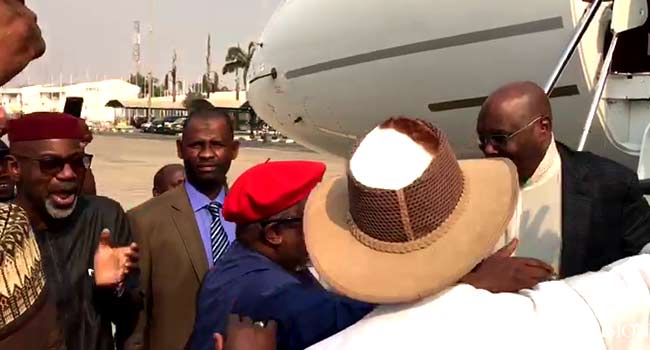 While in Washington D.C., Atiku met with some Nigerians and participated in a business roundtable at the US Chamber of Commerce.

He also held discussions with some Nigerians living in D.C. metropolis where he revealed his plans and commitment to working with them to ensure the development of Nigeria if elected president.

He had reiterated his commitment to the devolution of powers at the centre, thereby “allowing for a smaller, and more effective Federal Government”.

Upon his return to the country, the PDP candidate is expected to participate in a presidential debate organised by the Nigeria Elections Debate Group (NEDG) and the Broadcasting Organisations of Nigeria (BON).

Others expected to partake are President Muhammadu Buhari of the All Progressives Congress (APC) and Dr Obiageli Ezekwesili who is running on the platform of the Allied Congress Party Of Nigeria (ACPN).

The other two candidates are Mr Fela Durotoye and Professor Kingsley Moghalu of the Alliance For New Nigeria (ANN) and the Young Progressive Party (YPP).

The debate, which holds by 7:00pm in Abuja, will be transmitted live on all BON member-stations and its affiliates.

Ahead of the general elections, it provides a platform for the presidential candidates to tell Nigerians how they plan to move the nation forward.

The debate comes five weeks after NEDG and BON organised a similar debate for vice-presidential candidates.

2023: Zoning Is Not The Solution To Nigeria’s Problems, Says Atiku

Atiku Condemns Killings In Plateau, Others