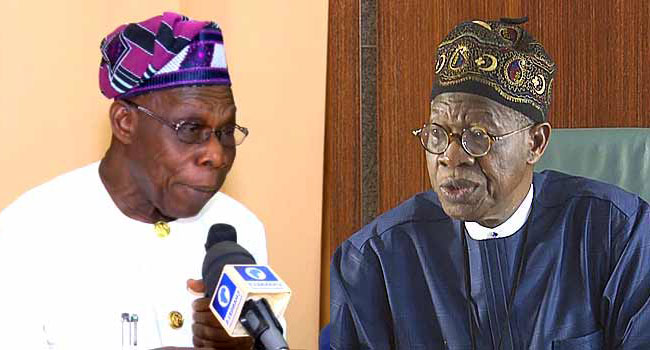 The Federal Government has replied former President Olusegun Obasanjo over his comment on the activities of Boko Haram terrorist group describing his comment as divisive.

According to the Federal Government, the comment by the former president is aimed at imputing ethnoreligious motive to Boko Haram and ISWAP and it is “deeply offensive and patently divisive.”

This was disclosed in a statement issued in Abuja on Tuesday by the Minister of Information and Culture, Alhaji Lai Mohammed.

Mohammed added that such comments are far below the status of an elder statesman.

He said it was particularly tragic that Obasanjo, who fought to keep Nigeria one is the same one seeking to exploit the country’s fault lines to divide it in the twilight of his life.

The Federal Government has described former President Olusegun Obasanjo’s comments imputing ethno-religious motive to Boko Haram and ISWAP as deeply offensive and patently divisive, saying such indiscreet comments are far below the status of an elder statesman.

In a statement issued in Abuja on Tuesday, the Minister of Information and Culture, Alhaji Lai Mohammed, said it was particularly tragic that a man who fought to keep Nigeria one is the same one seeking to exploit the country’s fault lines to divide it in the twilight of his life.

He said Boko Haram and ISWAP are terrorist organizations pure and simple, adding that they care little about ethnicity or religion when perpetrating their senseless killings and destruction.

“Since the Boko Haram crisis, which has been simmering under the watch of Obasanjo, boiled over in 2009, the terrorist organization has killed more Muslims than adherents of any other religion, blown up more mosques than any other houses of worship and is not known to have spared any victim on the basis of their ethnicity. It is therefore absurd to say that Boko Haram and its ISWAP variant have as their goal the ‘Fulanisation and Islamisation’ of Nigeria, West Africa or Africa,” Alhaji Mohammed said.

He said President Buhari put to rest the mis-characterisation of Boko Haram as an Islamic organization when he said, in his inaugural speech in 2015, that “Boko Haram is a mindless, godless group who are as far away from Islam as one can think of”.

The Minister said Obasanjo’s comments are therefore as insensitive and mischievous as they are as offensive and divisive in a multi-ethnic and multi-religious country like Nigeria, wondering whether there is no limit to how far the former President will go in throwing poisonous darts at his perceived political enemies.

He said Obasanjo’s prescriptions for ending the Boko Haram/ISWAP crisis, which include seeking assistance outside the shores of Nigeria, are coming several years late, as President Buhari has done that and more since assuming office, hence the phenomenal success he has recorded in tackling the terrorists.

“Shortly after assuming office in 2015, President Buhari’s first trips outside the country were to rally the support of Nigeria’s neighbours – Benin, Cameroon, Chad and Niger – for the efforts to battle the terrorists. The President also rallied the support of the international community, starting with the G7, and then the US, France and the UN.

“That explains the massive degrading of Boko Haram, which has since lost its capacity to carry out the kind of spectacular attacks for which it became infamous, and the recovery of every inch of captured Nigerian territory from the terrorists,” Alhaji Mohammed said.

He said Obasanjo’s call for wide consultations with various groups as part of the efforts to tackle the Boko Haram crisis has been neutralized by his ill-advised comments which have served more to alienate a large number of Nigerians, who are offended by his tactless and distasteful postulation.

The Minister called on the former President, whom he said took bullets for Nigeria’s unity, not to allow personal animosity to override his love for a united Nigeria, saying it will not be out of place if he withdraws his unfortunate statement and apologizes to Nigerians.

Obasanjo To Buhari: Killings Can’t Be Swept Under The Carpet [FULL STATEMENT]

You Deserve To Be Celebrated, Obasanjo Tells Atiku