The family of Melojuekun Barakat, a teenager allegedly sexually harassed by the Ogun State Commissioner for Environment, Abiodun Abudu-Balogun, has withdrawn the allegation.

The father of 16-year-old Barakat, Monsuru Melojuejun has expressed his desire to discontinue with the case against the commissioner.

In a viral video on social media, the victim’s father said he is not interested in pressing further the matter further, begging Nigerians and international community and the media to support him by laying the matter to rest.

“I am the biological father to Melojuekun Barakat, who was in the news recently about a sexual harassment between her and the current Commissioner for Environment in Ogun State in person of Hon Abiodun Abudu-Balogun,” he said.

“I want to thank the media for their doggedness and aggressive support to make sure justice prevail. I am using this opportunity to also thank the international community, well-meaning Nigerians and all Ogun State indigenes that showed their love and encouragement to this matter.”

He attributed the reason to “few misconceptions and misunderstanding” along the line in the alleged case of sexual harassment proffered against the commissioner.

“Sincerely I discovered that there were some misconceptions and misunderstanding along the line between my daughter and the Hon Commissioner. Having discovered this, I deemed it fit to come to the public and inform Nigerians and international community that this matter should be allowed to lay to rest.

“As a father to Melojuekun Barakat, I am using this opportunity as well to appeal to all Nigerians and international community and the media too that I don’t have interest in this matter again.

“I am withdrawing my case and want them as well to support me the same way they did in the beginning of this matter,” he concluded. 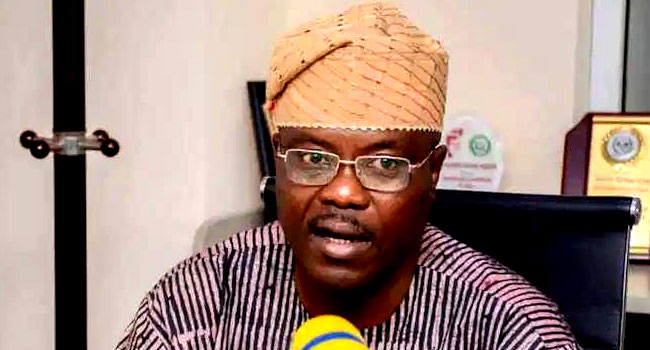 The police authorities in Ogun State on Monday said it would continue the investigation of sexual harassment allegation levelled against the Commissioner for Environment, Abiodun Abudu-Balogun.

In a statement, the Police Public Relations Officer, Abimbola Oyeyemi, said the move is necessary to establish whether the alleged crime was committed by the suspect.

“This is purely a case against the state, an allegation has been made and it is our duty to ensure this is investigated to unravel the authenticity of the allegation or otherwise,” he said.

He said that since the alleged crime is against the state, the issue of settling amicably is out of the way, adding that the Commissioner of Police, Edward Ajogun has directed that the case be transferred to the Criminal Investigation Department for discrete investigation

His reaction is coming on the heels of an alleged call for an amicable resolution by the father of the 16-year-old girl, Melojuekun Monsuru, making the rounds on social media network.

According to the police spokesman, the suspect, Abudu-Balogun had been invited by the police and had made statement at the Ogbere Area Command office, Waterside Local Government Area of the state

“The state Commissioner of Police, Edward Ajogun has ordered the case to be transferred to the Criminal Investigation Department for Investigation, this has commenced,” he said.

He also reiterated the commitment of the state police command to ensure that justice is served adequately.

The Ogun State government has suspended the Commissioner for Environment, Abiodun Abudu-Balogun.

Mr Abudu-Balogun was suspended from office over an allegation of sexual harassment of a 16-year-old girl identified as Barakat Mayowa Melojuekun.

In a statement issued on Sunday in Abeokuta, the Secretary to the State Government, Mr Tokunbo Talabi, announced the suspension of the commissioner pending the conclusion of an independent investigation into the allegation.

He explained that the state government decided to suspend Abudu-Balogun to enable him to cooperate fully with the independent investigation being carried out by the police.

“Whilst taking cognisance of the principle of a suspect being presumed innocent until proven guilty and the public statement issued by Honourable Abudu-Balogun denying the allegation, as a government with zero tolerance for gender-based violence and indeed any criminality, the suspension is a further demonstration of the commitment of Dapo Abiodun administration to fairness, equity, justice and the rule of law, no matter who is involved,” the statement read.

Talabi assured the residents that the state government would do everything necessary to ensure that justice was served in the case.

He disclosed that the suspended commissioner has been directed to hand over to the Permanent Secretary at the State Ministry of Environment.

Barakat, a secondary school student in her final year, had accused the suspended commissioner of attempting to rape her.

She said she met the commissioner on Tuesday last week, but the incident occurred on New Year’s Eve.

While waiting at a park in Ogun Waterside Local Government Area, the commissioner who was said to be driving stopped the car and offered her a lift, but she declined.

Barakat alleged that she had been receiving calls from an unknown person who claimed to be the commissioner’s aide and two days later, she was reportedly taken to Abudu-Balogun’s residence by her uncle.

Although she stated that her uncle might be unaware of the commissioner’s intention as he took her to his house to operate a computer, she claimed she was lured to his bedroom.

The victim said she was left alone and allowed to go after she shouted at the top of her voice, and later narrated her ordeal to her parents who reported the case at the police station.

The Area Commander of Police in Abigi is said to be handling the case and the police have promised to make the outcome of police public.

The House of Representatives has mandated a joint committee to investigate the alleged involvement of the Nigerian National Petroleum Corporation (NNPC) with Swiss oil dealers in deals that cost the federal government billions of dollars.

This resolution followed a motion by Abiodun Abudu-Balogun, who drew attention to a Berne Declaration report, a Swiss non-governmental advocacy organisation, released last week, detailing how the NNPC and the Swiss oil trading companies allegedly duped the country of over $6.8 billion.

Abudu-Balogun expressed worry that “In spite of all these actions of the National Assembly, there are still allegations of corruption in the Nigerian oil industry. The new report by Swiss non-governmental advocacy organisation, the Berne Declaration, detailing how the NNPC, in connivance with major Swiss oil trading companies, is draining Nigeria of billions of dollars of revenue through the sale of crude oil below the market value.

“The Berne Declaration has described the Nigerian oil scam as the greatest fraud Africa has ever known, and the report specifically listed Vitol and Transfigura Commodity Trading Firms (NNPC partners) in the shady deals, saying Nigeria loses billions of dollars as large volumes of oil are exported far below the market prices.

“Exclusive and (non transparent) partnerships of Vitol and Transfigura with NNPC gave them over 36 percent of the market share, with NNPC selling its crude at discounts. Why is Nigeria the only major oil producing nation that sells 100 per cent of its crude to private traders rather than market, it benefits from the resulting added value with the greatest number of beneficiaries of export allocations.

“(We are) worried by the sharp practices and deals in NNPC crude oil allocations to local refineries, which are not utilised, but sold fraudulently at knock down prices to Geneva-based companies through letter box companies by SWAP arrangements,” he said.

Titled “Swiss Traders Opaque Deals in Nigeria”, the report catalogued the “letter box companies”  modus operandi employed by  the alleged partners to defraud the country of over $6.8 billion, noting that such a fraud is the greatest in Africa.

The report said: “No less than 6.8 billion dollars of unjustifiable subsidies were paid out in 2009 and 2011 – that is the equivalent of nearly four times the Nigerian health budget for 2013.”

It said, “the all-powerful national company, the NNPC, categorised as the most opaque national oil company on the planet, itself is evidence of Nigeria’s ‘resource curse’ at work.”

The first and third largest Swiss enterprise in terms of turnover in 2012, Vitol and Trafigura, outclassed their competitors through opaque partnerships with the NNPC to defraud Nigeria, it said.

It notes that more than half of Nigerian crude oil exports pass through Switzerland and that Nigeria is the only major producing company that sells 100 per cent of its crude oil to private traders, rather than marketing it itself and benefiting from the resulting added value.

It further gave instances to show how oil sales between the NNPC and the Swiss partners were carried out at prices lower than the market rates, adding that seven of the Nigerian ‘importers’ involved in this fraud have a subsidiary in Switzerland.

The report indicts the NNPC thus: “Swiss traders do not acquire this crude oil based on public and transparent calls for tender… each year the NNPC grants the allocations of exports under obscure conditions and on the basis of criteria that are unknown outside the restricted circle of the decision makers.”

The Berne Declaration said the profit generated by NNPC and its Swiss partners escape state coffers, adding that any profits that are collected in Nigeria for the state don’t get through.

The lawmaker said in view of the damaging allegations contained there-in, the House needs to investigate the report.

The committee is expected to report back to the house within four weeks.