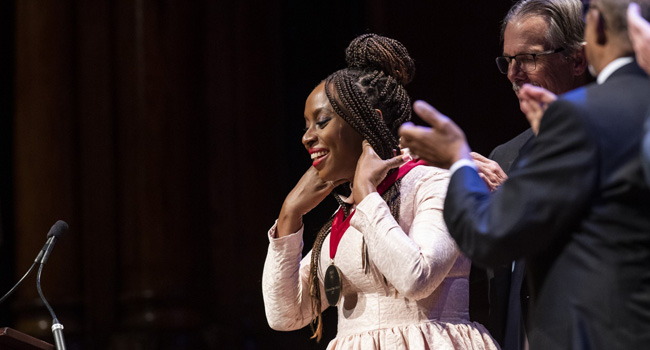 She received the medal at a ceremony on Thursday.

The W.E.B Du Bois medal had not been awarded to anyone since the beginning of the covid 19 pandemic. It is the highest honor given by Harvard in the field of African and African American studies.

Chimamanda is known for her elegant storytelling and her advocacy for gender equality.  She was also a speaker at the Harvard College Class Day in 2018 and was previously a Harvard Radcliffe Institute Fellow between 2011 and 2012.

A professor of the university and director of the Hutchins center said in a statement that,

“Whether they’ve distinguished themselves in the arts, civic life, education, athletics, activism, or any combination of the above, these medalists show in all that they do their unyielding commitment to pushing the boundaries of representation and creating opportunities for advancement and participation for people who have been too often shut out from the great promise of our times,” it said.

The medal allows her to join the list of trailblazers like Muhammad Ali, Maya Angelou, Ava Duvernay, Dave Chappelle, Queen Latifah, Nasir “Nas” Jones, John Lewis, Steven Spielberg, athlete-activist Colin Kaepernick, and others who are past recipients of the medal. 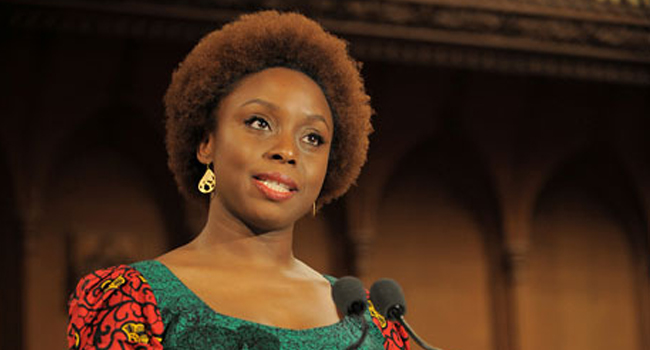 Nigerian novelist Chimamanda Adichie says the country does not have “heroes” who will inspire its younger population.

Adiche made the comment on Monday in her keynote address at the Annual General Meeting of the Nigerian Bar Association (NBA) in Lagos State.

“We are starved of heroes. Our young people do not find people to look up to anymore,” the award-winning writer said during the event.

According to the author, Nigerians should be open to self-criticism. This, she said, will engender good leadership in the nation.

“As long as we refuse to untangle the knot of injustice, peace cannot thrive. If we don’t talk about it, we fail to hold leaders accountable and we turn what should be transparent systems into ugly opaque cults,” Chimamanda noted.

“My experience made me think there’s something dead in us, in our society; a death of self-awareness and ability for self-criticism.


The award-winning writer was one of the several guests at the conference which has the theme ‘Bold Transitions’.

Some of the personalities who graced the event on Monday include the presidential candidate of the Labour Party (LP) Peter Obi and his Peoples Democratic Party (PDP) counterpart Atiku Abubakar.

But the All Progressives Congress (APC) flagbearer Bola Tinubu did not attend. He was instead represented by his running mate Kashim Shettima at the conference which started on August 19 and will end on August 26.

The NBA had earlier said Tinubu and the presidential candidate of the New Nigeria People’s Party (NNPP) Rabiu Musa Kwankwaso did not confirm their availability for the conference.

Other presidential candidates at the event were that of the African Democratic Congress (ADC) Dumebi Kachikwu and the Social Democratic Party (SDP) Prince Adewole Adebayo.