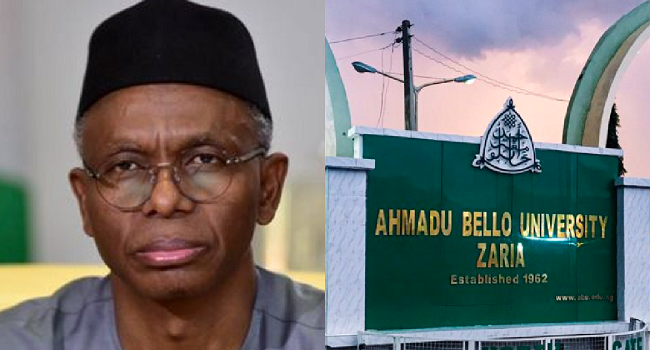 Hundreds of workers of the Ahmadu Bello University (ABU), Zaria, have held a peaceful protest over the alleged encroachment on the school’s College of Agriculture and Animal Science land by the Kaduna State Government.

The ABU ASUU Chairman, who led the protest, described the government’s action as despicable and in clear conflict with Section 49(1) of the Land Use Act of 2004, which exempts federal government lands from management and control of state governors.

The College of Agriculture and Animal Science, Mando, was established in the 1950s as a veterinary training centre of the then Northern Nigeria government.

The school covers a landmass of about 365 hectares.

It was later transferred to the ABU, Zaria, in 1971 to train students with sufficient technical knowledge and adequate practical skills in livestock management.

But the Kaduna State government, early this year, decided to take some portions of the land for development purposes and has already commenced the process of creating access roads and clearing the bushes.

During their protest, the ABU workers chanted anti-government songs, accusing the Kaduna State government of playing double standards despite a valid court order which restrained it from taking over the land.

They marched around the school premises and later proceeded to the disputed land where they disrupted the works on the site.

They also urged the management of the ABU to withdraw the certificate of Governor Nasir El-Rufai, who is an alumnus of the university.

In its reaction, the Kaduna State government accused the ABU management of double standards, stating that the school violated one of the conditions of which the land was allocated to it. According to the government, the institution sold some portions of the land to individuals rather than using it for the purpose of agricultural development and livestock production which it was meant for.

Ismail Umaru-Dikko, the Director-General of Kaduna State Urban Planning DevelopmentAuthority, told Channels Television that the management of the college illegally sold about 80 hectares of the land without recourse to the Kaduna State governor who is the custodian of all lands in the state.

This, he said, is a clear violation of the Kaduna State Land Use Administration Law, as the college does not have the legal right to excise any portion of the land outside the purpose of agricultural development and livestock production of which the land was allocated to the school from the onset.

The state government has, however, stated its willingness to allocate fresh land to the college in a different location if there is a genuine reason to do so. 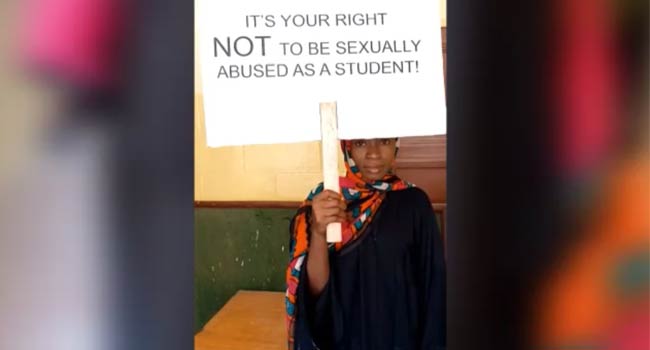 An ex-student of the Ahmadu Bello University (ABU), Zaria in Kaduna State, Miss Salamatu Bello has demanded the prosecution of a former lecturer of the institution, Bala Umar for allegedly abusing her sexually while she was an undergraduate.

In a video obtained by Channels Television on Monday, Miss Bello demanded proper prosecution of Umar even after his suspension by school authorities at ABU and Kaduna State University (KASU).

According to her, suspending the lecturer is the first step while prosecuting him will serve as a deterrent to other lecturers who may want to take advantage of their positions to harass female students on campuses.

Stating her demands, Bello said, “I want every sexual predator in Nigerian universities to lose their jobs. I want them not to be able to work in the academic environment.

“I want the government to ensure the academic environment is safe for women, boys and girls. They should do more than promising.

“Everyone is telling me that I am not going to get a job and that I am going to be stigmatised but this is more than one person. I am fighting for people who are suffering in silence,” she said.

The lecturer, Bala Umar was sacked by ABU following Bello’s allegation but was said to have been re-employed by the management of Kaduna State University (KASU) in 2013.

However, Miss Bello had last week staged a one-man protest at KASU, to draw the attention of the university about her encounter with him and why he should be sanctioned.

Her protest, however, paid off as the management of KASU suspended the lecturer after a preliminary investigation found him culpable.

Kaduna State Governor Nasir El-Rufai also reacted to the allegations against the lecturer.

KADUNA UPDATE: The suspension of Mr. Umar by KASU is the first step. He & 15 lecturers sacked by nearby ABU Zaria for sexual harassment will be fully investigated & prosecuted by the Attorney General of Kaduna State. We must face evil & end this scourge in our state!! @DrHadiza https://t.co/Jw58sAHpc7

In a tweet on his official handle, he promised that Umar and 15 other lecturers sacked by ABU Zaria for sexual harassment will be fully investigated and prosecuted by the Attorney General of Kaduna State. 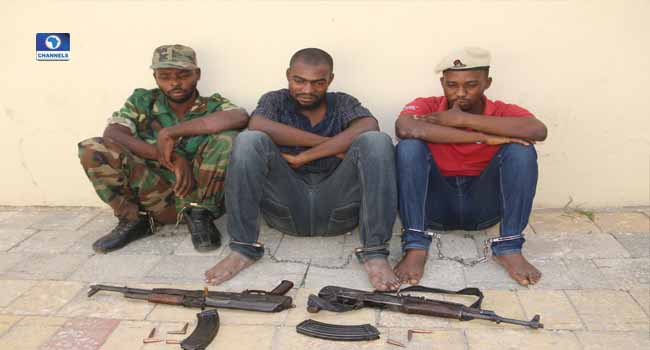 The Nigerian Police Force has foiled the attempted kidnap of a Nigerian oil magnate, Femi Otedola.

In a statement by the Force Public Relations Officer, DCP Donald Awunah, on Wednesday, said the IGP’s Intelligence Response Team (IRT), accomplished this task when it arrested a three-man notorious kidnap gang on June 23, 2016.

According to him, the arrest was achieved through coordinated intelligence gathering and deployment of technical investigative tools, that spanned several weeks.

The Principal suspect, named Ikechukwu Daniel, a 28 year old indigene of Imo State, who is the mastermind of the gang, was rusticated from Ahmadu Bello University Zaria, due to his cult related activities on campus between 2009 and 2010.

Awunah confirmed that he also doubles as the I.T guru of the kidnap gang, with mastery of Computer applications, as he made damning revelations of their criminal exploits in the south west of the country.

Another member of the gang, 29 year old Adeyemi Kayode, is a serving officer of the Nigeria Security and Civil Defence Corps and a native of Ojoo in Ibadan, Oyo State.

He serves as a Personal Assistant to the Commandant, NSCDC Oyo State Command, a position which the Police say he took undue advantage of, to obtain the GSM number and location of their ‘would-be’ victim.

According to the force, he hatched the plan on how to kidnap the business magnate to make a demand of one billion Naira ransom.

The third suspect, Ayodele Temitayo, a native of Oyo in Ibadan, Oyo State who is the marksman and armourer of the gang, claimed to have been dismissed from 213 Battalion Maiduguri of Nigeria Army, as a Private in 2015.

All the suspects made confessional statements revealing that they had successfully carried out several high profile kidnappings, while two AK-47 rifles loaded with live ammunition, were recovered from them.

Idris says efforts are currently being intensified to apprehend other members of the gang and extend investigation to their other criminal syndicates.

He therefore re-iterated the commitment of the Nigeria Police Force, to clamp down on all criminal activities across the country and reassures law abiding citizens that criminal elements would be eventually apprehended and charged to court.

The IGP also urged Nigerians to avail the Police with relevant information that would help in the crusade against crime, stating that such information would be treated with utmost confidentiality. 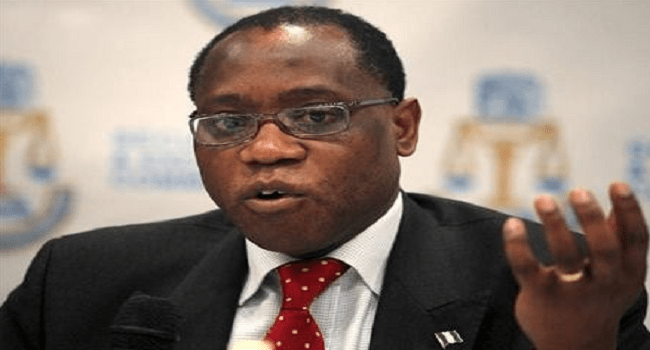 The Federal Government has commissioned the first Sugarcane Bio-factory at the Ahmadu Bello University Zaria, Kaduna State as part of efforts to achieve national self-sufficiency in the nation’s sugar requirements.

Commissioning the factory on Monday, the Minister of Industry, Trade and Investment, Mr. Olusegun Aganga, said that the inauguration of the one-million seedling per annum capacity bio-factory was the first in the series of bio-factories to be established in the next five years, with combined capacity estimated at 12.5million cane seedlings per annum.

He explained that the provision of high grade and quality seedlings of sugarcane is essential for the attainment of the set goals of the National Sugar Master Plan.

The production of sugar has been described as an integrated process with field and factory processes that are inter-dependent and mutually inclusive.

Thus, efficiency in the cultivation and supply of sugarcane is essential for efficient milling and production of sugar and associated by-products such as ethanol and electricity.

This facility, according to Mr Aganga, is designed to address all the critical challenges facing Nigeria’s sugar industry.

Its commissioning therefore marks another milestone in the implementation of the National Sugar Master Plan, which was approved by the administration of President Goodluck Jonathan in September 2012.

The ultimate goal is to make Nigeria’s manufacturing sector highly competitive and dynamic.

Speaking during the event, the Vice Chancellor of Ahmadu Bello University, Professor Ibrahim Garba, said that the project is a proactive approach for alleviating problems of sugacane production in Nigeria and will also support the efforts being made by the National Sugar Master Plan in ensuring sustainable sugarcane production by the year 2020.

As the factory settles down for production, Nigerians would hope that this addresses the short supply of sugar needed by many industries for the production of daily consumables and also create more job for the teeming population. 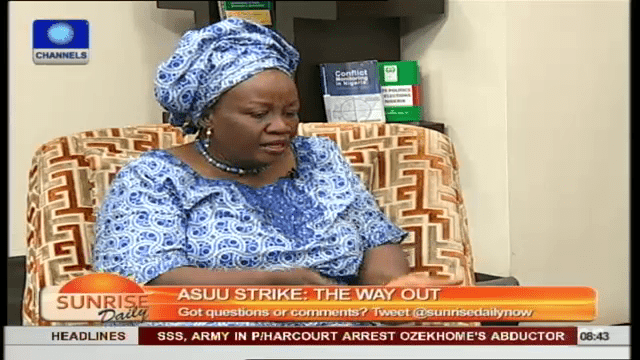 An educationist, Abiola Awosika on Tuesday urged the federal government to dedicate 35 per cent of its budget to education to ensure that the country meets the international educational standard.

Speaking during a programme on Channels Television, the education professor said she had written an academic article in 1992, recommending that 25 per cent of Nigeria’s budget be dedicated to education because “we had a shortfall and we needed to catch up with the rest of the world”.

“So if the United Nations (UN) is recommending 26 per cent today, we need to be at may be 35 or 36 per cent of our budget going into education” noting that “if we do that, we will be able to move our universities up” she said.

She further advocated for a shift in the mode of learning saying “I keep saying that technology is the way to go. E-learning”.

She recounted the visit of former British Prime Minister, Gordon Brown’s visit to Nigeria, where he also, according to her, told the National Universities Commission (NUC) and “told them categorically that e-learning is the only way that we are going to be saved in this country”.

She however noted that “a lot of our universities are in the fore front of that” listing “Obafemi Awolowo University (Ife), Ahmadu Bello University (Zaria), University of Ibadan (Ibadan)” as universities that “are trying to do something different so that we can get different results”.

Despite canvassing for financial autonomy for Nigerian universities, she noted that “we have to also think about the economy that we are in” expressing dismay that Nigerians pay overseas and don’t want to pay in Nigeria.

She further noted that over N60 billion is paid to Ghana by Nigerians who go there to study annually.