President Goodluck Jonathan has congratulated Oba Rilwan Babatunde Akiolu I of Lagos as he marks 70 years on October 29.

In a statement signed by the Special Adviser to the President on Media & Publicity, Reuben Abati:

“President Jonathan joins the people of Lagos and Oba Akiolu’s friends, associates and peers across the country in felicitating with the monarch who has exhibited exemplary wisdom, courage, selflessness, philanthropy and dedication to the service of his people since his ascension to the revered throne of Lagos over 10 years ago”.

The President assures Oba Akiolu, on the occasion of his 70th birthday that the Federal Government will continue to work diligently, in cooperation with all other tiers of government in the country, towards progressively improving the living conditions of people in his domain and all other parts of Nigeria.

President Jonathan prayed that God will grant Oba Akiolu continued good health and many more years of commendable service to the people of Lagos and Nigeria. 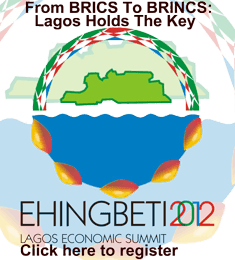 The Lagos state government has plans for the 6th Lagos Economic Summit, also known as EHINGBETI 2012 with a focus to see Lagos as the key of Nigeria’s ascension to join the league of the fast-growing BRICS economies (Brazil, Russia, India, China and South Africa) and make it BRINCS.

Speaking at a media networking session at the weekend, Lagos State Commissioner for Economic Planning & Budget who doubles as Chairman of the Lagos Economic Summit Group, Mr. Ben Akabueze, unveiled the theme of the 2012 edition of the summit titled, “From BRICS to BRINCS: Lagos Holds the Key”.

He explained that in the aspiration of Nigeria to join the league of the fast-growing BRICS economies (Brazil, Russia, India, China and South Africa), which will now change the acronym to BRINCS (including Nigeria), Lagos as the nation’s economic capital with vast potentials and investment opportunities will play a central role.

It is within this context and the place of Lagos as Nigeria’s economic capital that this edition of the Summit will examine the economic potentials of Lagos.

Mr. Akabueze noted that, Lagos is undeniably the economic nerve centre as “Lagos consumes about 45% of the petroleum products in the country. This shows the high level of commercial activities in the state.”  He also noted the economic capacity of the state which spans banking, travel and power generation.

“On the average, 40% of bank branches are in Lagos because of the high level of business activities here.  Over 40% of the telecoms subscriber base is here in Lagos. Two seaports in Lagos accounts for 70% sea trade in the country. The two electricity distribution companies Eko and Ikeja Districts account for 50% of PHCN’s transmission power. About 80% of International air travel arrive in and depart from Lagos. All these point to Lagos as the economic nerve centre of the country.  So, if Nigeria is being rated as one of the major players in the emerging markets, then you will agree with us that Lagos holds the key,” Akabueze said.

He further explained that, in spite of all that Lagos contributes to the Nigerian economy, there is still a lot to be brought out in terms of the economic potentials of the State. “But it would take ideas, relationships and investment to unlock these potentials,” Akabueze noted.

Also speaking at the Media Session, Economic Analyst and Public Affairs Commentator, Opeyemi Agbaje noted that this is a moment of opportunity for Nigeria as an emerging economy saying,  “at the moment Europe is back to recession but the emerging economics (BRICS) are growing at about 7 %– 8%. Interestingly Nigeria is also growing at about 7%. Lagos is not an oil producing state but because of its commercial and financial strength it dominates in other sectors like telecoms, law, medicine, architecture, engineering, transportation, power, insurance, capital market, media, entertainment, education and more. Lagos is a private sector driven economy. Growth in Lagos would have spiral effect on Nigeria as a whole. Lagos has the lowest level of unemployment in Nigeria at 7% compared to some States that has as much as 40%.”

Mr. Ben Akabueze noted that while the first three editions of the summit were diagnostic in trying to analyse the problems, understand the challenges and what needed to be done but government shifted attention as from the fourth edition towards implementations. This he claims as clear evidence of the resolve on the part of government to see that the Summit is not just another talk shop held biennially.

“Today, I can tell you with all sense of responsibility that we have implemented over 100 of the 119 resolutions so far reached at past editions of Ehingbeti Summits. Those that have not been implemented or are on-going are those that require other partners like the Federal Government.”

The 2012 edition of Ehingbeti which will have Governor Babatunde Raji Fashola (SAN) as chief host is to focus on four key sectors, Power, Agriculture, Transportation and Housing (PATH).