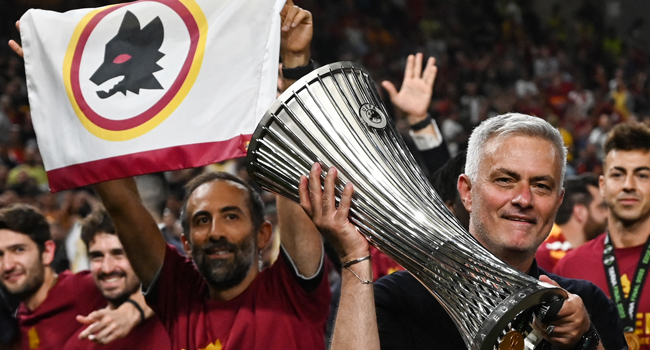 Jose Mourinho said that he and Roma had made history after winning the Europa Conference League on Wednesday, the club’s first-ever major European trophy.

Portuguese coaching icon Mourinho tried and failed to hold back the tears after Roma beat Feyenoord in their first continental final in over three decades and he was still emotional by the time he hailed his team after the trophy ceremony.

Roma fans have taken Mourinho into their hearts during an up and down season which culminated in Wednesday’s 1-0 win in Tirana which ended a 14-year trophy drought for the capital club.

“I’ve been at Roma for 11 months, I knew the moment I arrived what it meant to the people. They had been waiting for something like this,” Mourinho told Sky.

Wednesday’s triumph was his fifth European title and made him the first coach to win all current UEFA competitions.

And he confirmed that he would be staying at Roma next season to build on the solid work done in his debut season.

“I am staying, there’s no doubt about that,” he said.

“We need to see what our owners, who are fantastic people, want to do next season because this is history, but we can build a special project.

“Now I’m going to go on holiday, sit on the beach and think about it all for a while.” 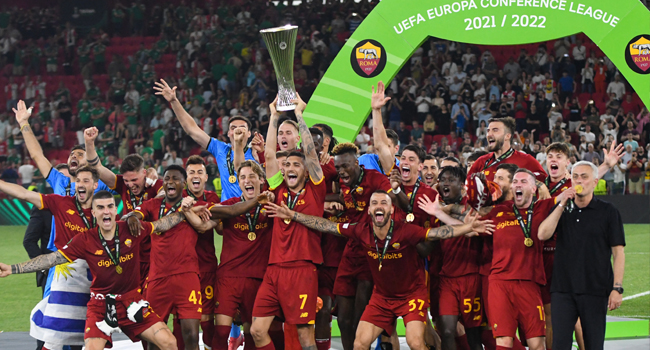 Nicolo Zaniolo won Roma their first-ever major European trophy on Wednesday with the only goal in a 1-0 win over Feyenoord in the inaugural Europa Conference League final.

Italy international Zaniolo struck with a well-taken finish in the 32nd minute to earn Roma their first trophy of any kind since 2008 and cap a successful first season for coach Jose Mourinho in Rome.

Mourinho was moved to tears by his fifth continental cup as a coach, the first for an Italian team since he led Inter Milan to the Champions League 12 years ago.

“It was a real struggle but I’m really happy,” Zaniolo said to Sky.  “It was my dream and now I’ve done it.”

Roma, Fairs Cup winners in 1961, rode their luck with Feyenoord having the lion’s share of the play and twice striking the woodwork in the second half.

But they remained solid in the face of Dutch dominance and brought joy to one of Europe’s most passionate and success-starved fan bases.

Over 50,000 fans packed the Stadio Olimpico in the Italian capital to watch their team make a little piece of history in Albania and poured onto the pitch once the trophy was secured.

“We know that after these amazing victories it’s always difficult to start again but a real team wins, celebrates, and then gets going again,” said Rome-born captain Lorenzo Pellegrini.

For 1970 European champions Feyenoord it was their first-ever defeat in a European final as well as being the first loss in the competition for Arne Slot’s team.

Zaniolo broke the deadlock with the only real moment of magic in what was a tight, scrappy opening half.

He expertly brought down Gianluca Mancini’s ball over the top that just escaped Gernot Trauner before flicking a finish past the onrushing Justin Bijlow.

The goal made Zaniolo the first Italian to score in a European final since Filippo Inzaghi in 2007 as well as a confirmed hero for Roma fans.

Feyenoord had dominated the ball, creating nothing of interest, but that changed almost immediately after the restart.

Trauner diverted a low cross off the post and seconds later Rui Patricio made his first real save of the match, the Portuguese reacting well to push Guus Til’s shot away.

And the 34-year-old was called into action again four minutes after the break, flinging himself to his left to just tip Tyrell Malacia’s rocket of a shot onto the woodwork.

Almost straight after Tammy Abraham had his hands in the air in disbelief when he was pulled back by Marcos Senesi just as he was charging through on goal, but Feyenoord were clearly on top.

The Dutch side continued to push but a spirited defensive display typical of Mourinho’s teams held them off and handed Roma a rare moment of glory.