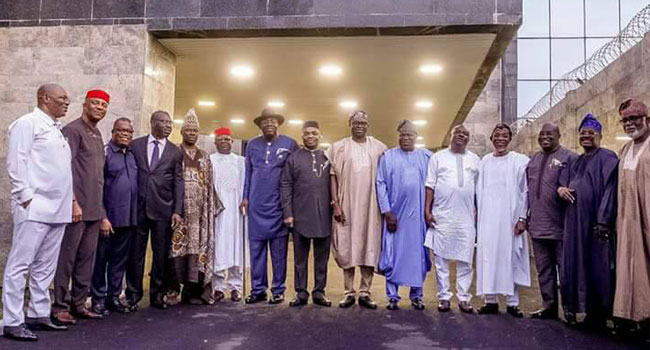 Governors of the Southern States of Nigeria after their meeting in Lagos on Monday have agreed on the devolution of powers and true federalism in the nation.

The Governors, at the end of the meeting, said they also resolved to collaborate with one another for the growth and development of economies in each state.

Speaking for the governors after the meeting, the host Governor Akinwunmi Ambode of Lagos State said after extensive deliberations, they have also emphasized to put priority on security and lives and property of citizens of the regions.

The governors also resolving to work on effective linkage on good infrastructure across the 17 states in the region.

Governors of Cross River, Anambra and Delta were represented by their Deputies Evara Esu; Ikem Okeke and Kingsley Otuaru.

Also at the meeting, Governor Ambode was appointed as the Chairman of the Southern Governors Forum (SGF) while Governors Seriaki Dickson of Bayelsa and David Umahi of Ebonyi States were appointed as Co-Chairmen of the Forum.

The Forum also scheduled the next meeting to hold in Port Harcourt on a yet to be announced date. 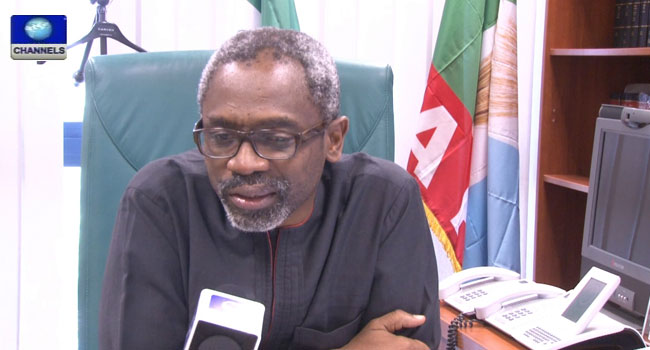 Majority Leader of the House of Representatives Femi Gbajabiamila says the lawmakers will revisit the issue of devolution of power upon resumption in September.

Honourable Gbajabiamila noted in a statement on Tuesday that although the democratic process was played out as it should be during the voting exercise, the process was ongoing and not concluded.

He explained that the Lower Chamber has a mechanism which allows for the recession of a decision when appropriate or when new unknown facts emerge.

The lawmaker said: “For me, it was a mistake or oversight to have lumped all items for devolution under one umbrella or subhead titled devolution of power”.

“There were about nine items including railways, pensions, arbitration, stamp duties, parks and others under the subhead and members should have voted on each rather than vote in one fell swoop. A member may have agreed to certain items for devolution to states and not to others. The way we voted, one would never know how to pass judgment on each item”.

Gbajabiamila, who stated that each item should stand on its own merit, described devolution of power as the simplest form of reconstructing the nation.

“It is important to note that devolution of power is baby steps and the simplest form of reconstruction, not a surgical dismemberment of our country. We must feel the pulse of the nation in moments like this,” he said.

Even though his colleagues did not support the bill on the devolution of power to states, Senate President Bukola Saraki believes that the issue can still be revisited if it is presented again.

The Senate President expressed the view at his residence in Kwara State where he explained that mistrust and misunderstanding were the factors responsible for the rejection of the bill.

“If this constitution amendment had come may be eight months ago, devolution of power would have passed easily. We must be honest with ourselves, there is a lot of mistrust in the country at the moment…”

Dr. Saraki, however, expressed hope that dialogue and reassurance on the part of the lawmakers would ensure the passage of the bill when represented after the recess.

Addressing members of the #NotTooYoungToRun group led by their Kwara State coordinator Olasupo Abideen, he expressed delight at the passage of the bill seeking to amend the age limit for political offices.

He thanked the group for their doggedness in ensuring the passage of the bill, saying the process was not easy as lots of discussions had to be done for the future leaders to be given a chance in Nigeria’s governance.

With the energy and capability of the youths, the Senate President noted that efforts must be made to give them the opportunity to contribute to nation building which informed why the bill was passed.

Earlier, Mr Abideen thanked Dr. Saraki and the National Assembly for the passage of the bill which he said would afford the youths to freely contribute to the growth of the country.

He, however, pleaded with the Houses of Assembly across the state to do the same and urged the Presidency to accent the bill. 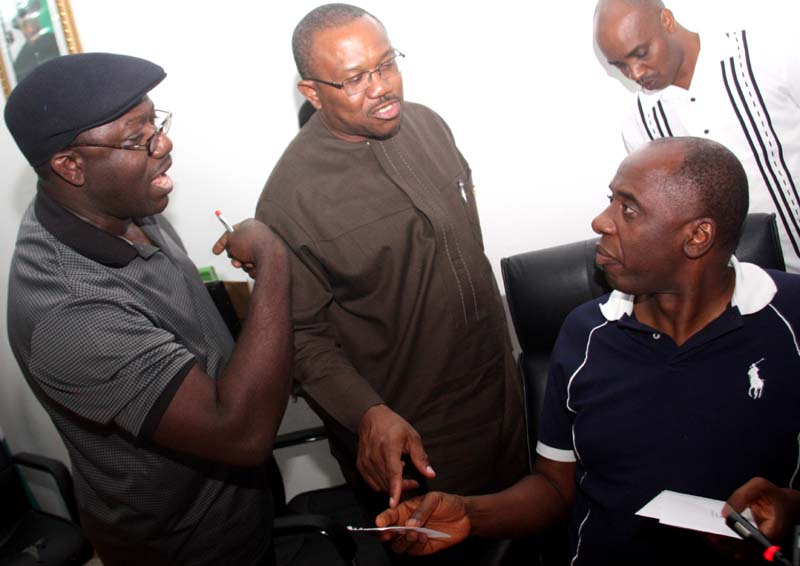 The thirteenth edition of Nigerian governors’ forum focused on constitutional issues as the governors are considering a review of the devolution of power in the amendment of the constitution.

The meeting which was held in Abuja during the day as the governors walked into the River state governors’ lodge for the closed door session.This further showed the urgency and importance of the issues to be discussed ranging from devolution of powers, revenue allocation, local government autonomy, land use act, national youth service act and security (state police) as we were informed after the meeting by the Chairman of the forum; Governor Chibuike Amaechi, he also read the agreement reached by the forum and added that the forum considered the growing clamour for revenue allocation and autonomy of local government administration.

He however stated that the forum is yet to reach a consensus on the issues.

Some of the state governors renewed the call for the establishment of state police amidst disagreement from their colleagues.

Speaking with newsmen after the meeting, Governor Rochas Okorocha, stated that the Federal Government is carrying a heavy burden on itself, which is affecting the pace of development in the country.

“Some of us, we believe that state police, community police, village police is the best way to go. Police should be decentralised to enable them really function at the grass root level.

On devolution of powers he said “there should be a distinction between federal police, state police. Whether we like it or not, we have community police, we have local government police and we have family police and you have police everywhere. Police is ability to check crime.

The position of the state governors is indeed a sensitive one which could have its consequences on the review of the 1999 constitution.