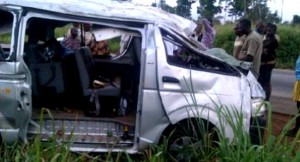 The President of the Union, Mr Biobelemoye Josiah, said the suspension of the proposed strike action is to enable the workers mourn the Minister of State for Labour and Employment, Mr James Ocholi,.

The Minister was the Chairman of a Negotiation Committee set up by the Ministry of Labour to address the issues raised by the health workers union in their notice of the proposed strike addressed to the ministry.

Mr Ocholi, died in a road accident along the Kaduna-Abuja highway.

Narrating how the incident occurred, the spokesman for the Kaduna State Police Command, Zubairu Abubakar, told our correspondent that the accident occurred while the family were returning from a private visit in Kaduna at Rijiana village along the expressway on Sunday afternoon.

He confirmed that while the Minister and his son died on the spot of the incident, his wife died few minutes after, at Doka General Hospital, about 60 kilometres to Kaduna, having sustained severe injuries.

According to an eyewitness, the Minister’s Sport Utility Vehicle had a burst tyre before somersaulting several times.