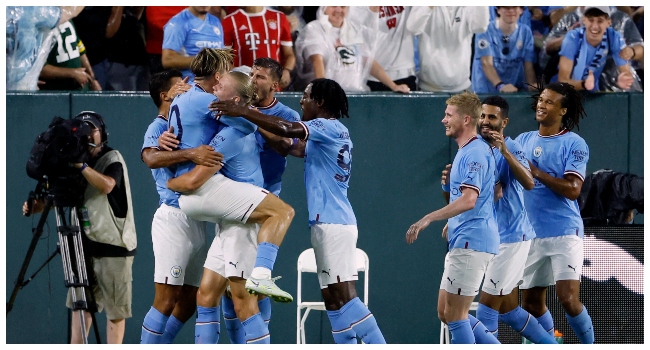 Erling Haaland launched his Manchester City tenure with a goal as Pep Guardiola’s men beat Bayern Munich 1-0 in a weather-disrupted friendly at Lambeau Field in Wisconsin on Saturday.

Two delays because of lightning in the area — one before kickoff and one in the first half — saw the contest shortened to 80 minutes.

It was plenty of time for City’s new $61 million striker Haaland to make an impression in his first appearance after Guardiola declared him over the injury “niggles” that kept him sidelined during City’s 2-1 victory over Mexico’s Club America in Houston on Wednesday.

Manchester City had threatened twice before a close-range strike by Bayern’s Serge Gnabry’s was disallowed by a narrow offside call in the seventh minute.

Five minutes later Haaland struck. After Riyad Mahrez’s free kick was blocked Kevin De Bruyne managed to corral the ball and slip a pass-through for Jack Grealish, who whipped it across to Haaland to connect from close range.

Frustratingly, another round of electrical storms brought proceedings to a halt, with players exiting the field and the near-sellout crowd of 78,128 at the iconic home of the NFL’s Green Bay Packers instructed to seek shelter in the concourses.

The start of the match had already been delayed almost 20 minutes because of dangerous weather conditions.

The disruptions didn’t dampen the festive atmosphere for the first professional soccer match ever held at Lambeau, with a few hardy fans even braving the pounding rain and risk of lighting to remain in their seats during the stoppage.

Play resumed with 27 minutes left to complete a 40-minute first half and Haaland quickly energized City fans in attendance, bursting through behind the Bayern defence.

But before he could unleash a shot a charging Dayot Upercampo booted the ball away.

Although Manchester City controlled the pace, Bayern had a golden opportunity in the 38th minute when a cross from the right found Alphonso Davies at the far post, but his pass across the goal face didn’t quite make it to Gnabry.

A minute later Haaland almost made it 2-0, but his left-footed shot from inside the area was disallowed for offside.

Haaland departed after 40 minutes of action, giving way to newly signed striker Julian Alvarez who nearly doubled the score in the 43rd.

Despite a stream of substitutions in the second half, tension remained high between the Premier League and Bundesliga champions until the end of the truncated contest as Bayern — who opened their brief tour with a 6-2 drubbing of Wayne Rooney’s DC United, sought in vain for an equalizer.

Both clubs were flying home after the match, with Manchester City due to take on Liverpool in the Community Shield next Saturday, when Bayern face RB Leipzig in the SuperCup final. 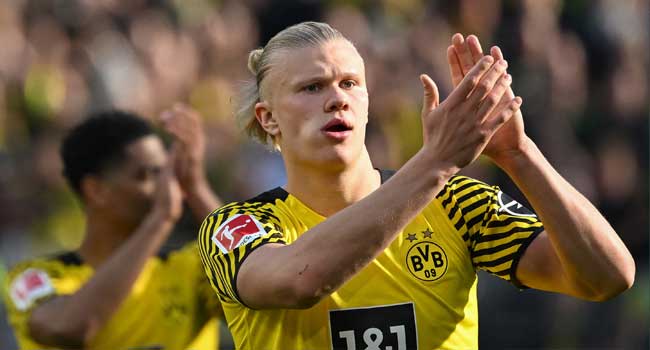 Pep Guardiola has refused to respond to reports that Manchester City are close to completing a blockbuster deal for Borussia Dortmund striker Erling Haaland.

City are reported to be set to pay the £63 million ($81 million) release clause in Haaland’s Dortmund contract after agreeing to personal terms with the Norway international’s agents this week.

It was said that Haaland’s deal with City would include weekly wages of £500,000 per week.

The 21-year-old is one of the game’s hottest properties and has also been strongly linked with Real Madrid.

Asked about a possible swoop for Haaland, City boss Guardiola would not be drawn on the speculation when he spoke to reporters on Tuesday.

“No answer to your question,” he said ahead of Wednesday’s Premier League clash with Brighton.

“I have another concern and business in my head right now than to think what will happen in this club next season.”

After failing in a high-profile attempt to sign Harry Kane from Tottenham last year, Haaland would fit the bill as the kind of lethal finisher City require.

But with City in the middle of a battle to retain the Premier League title and win a first Champions League crown, Guardiola was keen to focus on the present rather than future deals.

“We don’t know what is going to happen in the future. For many years I never talk about transfer windows, especially when we have incredible things to play for this season,” Guardiola said.

City are one point clear of Liverpool in the Premier League and the Reds can temporarily go top if they avoid defeat against Manchester United on Tuesday.

Their hopes of a treble ended on Saturday as they were beaten 3-2 by Liverpool in the FA Cup semi-finals at Wembley.

Guardiola had made seven changes for that clash as his players felt the effects of the previous Wednesday’s bruising Champions League tie at Atletico Madrid.

Asked if he had any regrets about his selection at Wembley, Guardiola said: “No. I understand the opinions of my fans. They have all my respect to give their opinions but my selection was for many reasons.

De Bruyne and Gundogan are back in contention for the Brighton game, but Walker remains sidelined with an ankle injury.

“For tomorrow he is not available. We will see how he reacts with his ankle,” Guardiola said. 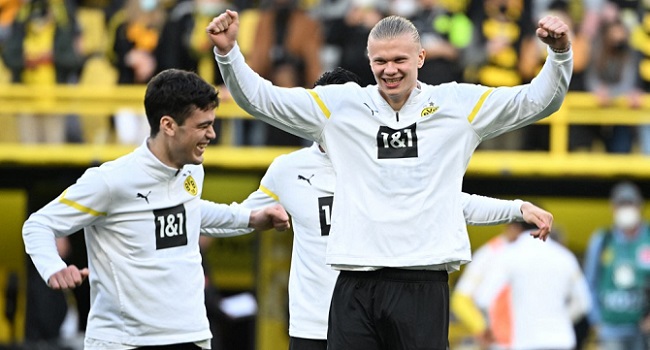 The 21-year-old Norwegian, who has bagged 16 goals in 14 league games this season, could be an option in the home match against Bielefeld having been sidelined by an adductor injury since January.

“He is in team training and is an option,” Rose said.

The Dortmund coach said Haaland is only likely to make a cameo off the bench, as “he has been out for a month. It would be a brief appearance, not longer.

“He is happy to be pain-free again. He’s doing very well,” Rose said of Haaland, who last played away to Hoffenheim on January 22.

There is persistent speculation that Haaland could leave Dortmund at the end of the season for a big European club, with Real Madrid, Manchester City and Paris Saint-Germain all reportedly interested.

An outbreak of Covid in the Bielefeld squad means it is uncertain Sunday’s game will take place.

“No final decision has been made yet, but we assume that we will play,” added Rose, who himself will be without Covid cases Mats Hummels and Raphael Guerreiro.

Rose revealed that US teenager Giovanni Reyna, who has been dogged by injury this season, “has also been back in team training for a week now and is also an option”.

Dortmund start the weekend second in the table and nine points behind runaway Bundesliga leaders Bayern Munich, but with a game in hand.