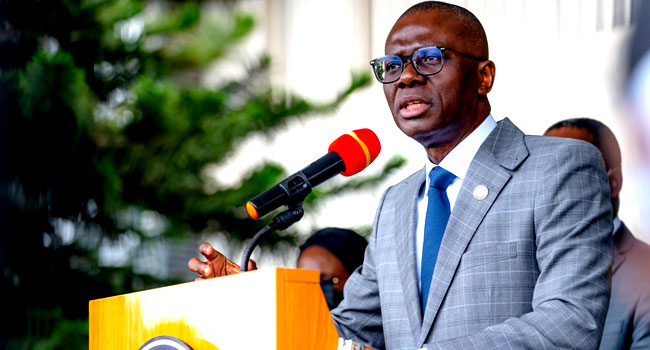 The Governor’s Advisory Council (GAC) in Lagos State has endorsed Governor Babajide Sanwo-Olu for another term in office.

GAC – the highest decision-making body of the All Progressives Congress (APC) in the state, gave the endorsement on Monday, said Mr Gboyega Akosile.

Akosile who is the Chief Press Secretary to Governor Sanwo-Olu explained in a social media post that the council took the decision at a meeting held in the state.

This comes amid speculations that GAC had ignored Governor Sanwo-Olu and endorsed another candidate for the 2023 governorship election in Lagos.

Dismissing the rumour, the council said it never settled for any person to replace the governor ahead of the polls.

In January, Governor Sanwo-Olu had during an interview with Channels Television said the people of Lagos were aware of what they would miss if his administration was denied a second term.

Although he did not expressly state if he would seek re-election at the time, the governor stated that the people would decide if his administration would be given another term or not.

“I think we are doing a very good job,” the governor had rated his administration during an interview on Sunrise Daily. “If I dare say so, I think that the citizens know what it is they will be missing if they don’t let us continue to wrap up all the things we are doing.

“As we speak, we have done about two-thirds of our term – about 65.7 per cent, because we count it every day. The field is not open yet; the race has not been declared open yet. But for me, it is about ensuring that these four years that I have promised my citizens, I put every bit of my sweat into it.

“I will ask, I will consult; citizens, how do you see it? …. that’s how you get it down. Keep your focus on, try and finish very strong. You know when it is time for us to do all the politicking, we will do it.” 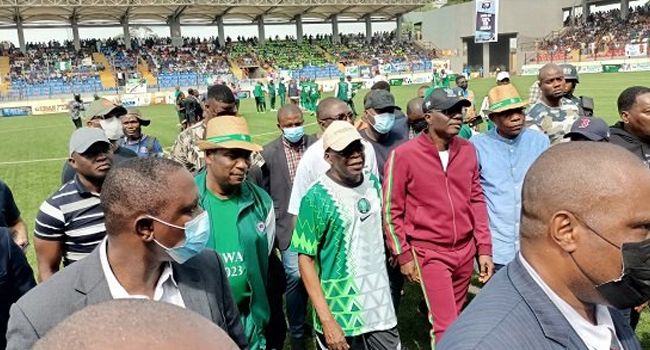 The novelty match between ex-Super Eagles players and Team Lagos, which took place at the Mobolaji Johnson Arena in Onikan, Lagos was attended by former and present members of the National Assembly, Lagos State Executive Council, Lagos State House of Assembly, and local government chairmen, as well as members of the Governance Advisory Council (GAC), Lagos State APC executive members, among others.

The match, which was attended by Tinubu, who kicked off the game, is part of the programmes organised by the Tinubu Support Group, in conjunction with the Lagos State Government, to celebrate the former Lagos State governor’s 70th birthday, which comes up on Tuesday, March 29.

Former Super Eagles Striker, Victor Agali scored two goals for the ex-international team led by Austin Jay Jay Okocha to defeat the Team Lagos, which is made up of former players of Stationery Stores and other clubs in Lagos State.

Agali scored the first goal 10 minutes into the second half from a brilliant pass from Julius Aghahowa. Agali then netted the second goal 12 minutes later after heading a cross from Austin Okocha who displayed brilliant dribbling skills during the match.

The Team Manager for Team Abuja was a member of the House of Representatives, representing Ikeja Federal Constituency, Hon. James Faleke, while Team Lagos was led by the Chief of Staff to Lagos State Governor, Mr. Tayo Ayinde.