Police have begun an operation to hunt down militants who allegedly attacked residents of Ewedogbon community in Igando area of Lagos State, southwest Nigeria.

Speaking during a combine-operation with the military, the Lagos State Commissioner of Police, Mr Fatai Owoseni, assured the residents of their safety.

“We are here (you can see my military counterparts with me as well) to come and appraise what we did yesterday.

A resident of the community told Channels TV, “The Ijaws are the ones causing the trouble.

“Initially they were selling petroleum products, now they are kidnapping and attacking innocent people.”

Many of the residents had fled their homes after suspected militants laid siege to their community on Monday. 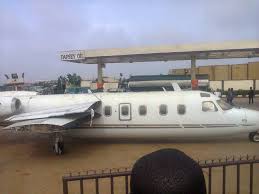 The General Manager, Air Traffic Control Operations of the Nigerian Air Space Management Agency (NAMA), Mr John Onyegiri, has described the plane that was sited at Dapsey Oil Station in Igando, Lagos on Thursday as a tricycle.

According to him, the wingless plane which he also referred to as a “junk plane” was being towed by a van to an unknown destination for “education purposes”.

Onyegiri said “you can’t call this one an aircraft anymore; this is like towing a junk”.

He further explained that the wings of the plane had to be taken off to ease movement and traffic on the road.

He called the plane a “tricycle” after the wings had been removed.

“Aircrafts have wings, so to be able to tow it as a junk, they have to take off the wings and it becomes a tricycle.

So they hook it up and take it somewhere else for tourism, for education purposes”.

He also said the airport is littered with “eyesores” like that that are yet to be removed by the Federal Airports Authority of Nigeria (FAAN).