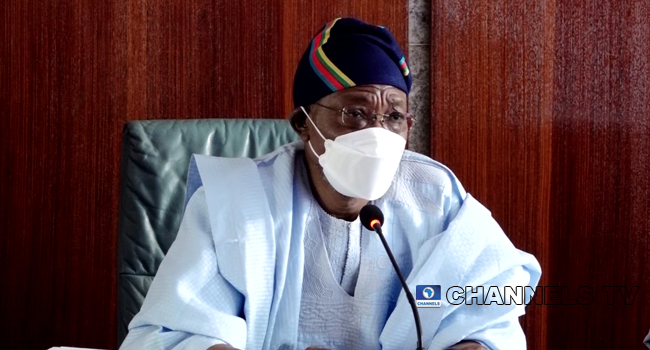 Civil rights advocacy group, Human Rights Writers Association of Nigeria (HURIWA), on Thursday, said the Minister of Interior, Rauf Aregbesola, must be sacked with immediate effect over his consistent failure to stop attacks on prisons in the country.

HURIWA’s National Coordinator, Emmanuel Onwubiko, in a statement, said it is distasteful and condemnable that over 15 jailbreaks have occurred under Aregbesola in the last five years while over 3,000 inmates have escaped.

The group also urged the President, Major General Muhammadu Buhari (retd.), to stop asking rhetorical questions on social media on how the intelligence system of the country failed to detect Tuesday attack at Kuje prison in Abuja.

HURIWA said the President should immediately set up judicial panel of inquiry on prison breaks in Nigeria and ensure that such assaults on the entire security apparatus of Nigeria do not recur.

Tuesday’s assault on the Kuje Correctional Centre was brutal even as the attackers bombed the prison, killed some security agents and inmates while they set over 600 prisoners free including 69 Boko Haram suspects.

According to media reports, soldiers deployed to Kuje vicinity and the Correctional Center’s environment, who had mastered the terrain, were redeployed 24 hours before the dastard attack.

A certain Mr Tukur Mamu, who is a media aide to controversial Islamic cleric, Ahmad Gumi, said the Kuje prison attackers were members of the Ansaru terrorist group who launched attack and kidnapped scores of passengers in Abuja-Kaduna bound train on March 28.

Reacting, HURIWA’s Onwubiko said, “The spate of jailbreaks under President Muhammadu Buhari and Minister of Interior, Rauf Aregbesola, is alarming and condemnable. Even under then President Goodluck Jonathan who had no military experience or background, jailbreaks weren’t as rampant as what Nigerians see these days.

“The frequent and recurring jailbreaks show the inefficiency of all those President Buhari appointed into office and his unwillingness to sack them show also that the President tacitly want the situation to continue to fester”.

HURIWA demanded the arrest of the persons who allegedly gave the order purportedly for withdrawal of soldiers before the attack.

The group also requested the sacking of the Minister of Interior, Rauf Aregbesola; and his Defence counterpart, Bashir Magashi; for “perpetual incompetence”.

Furthermore, they called for a broad-based judicial panel of inquiry on prison breaks in Nigeria to be constituted. 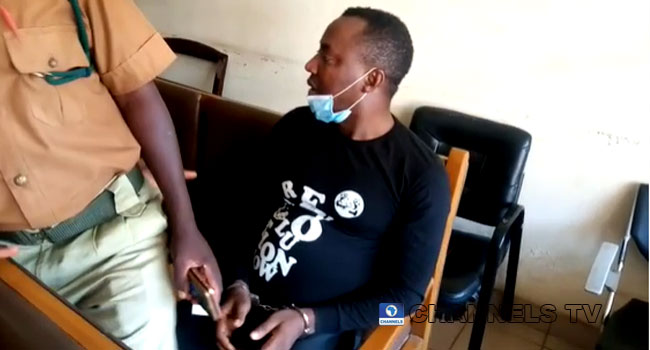 The bail application filed by Omoyele Sowore and four others has again suffered a temporary setback.

The application suffered a setback, this time, following the failure of the Nigeria Police Force to produce the defendants in Court.

In an interview with journalists on Friday at the Chief Magistrate Court in Wuse Zone 2, Abuja, the lawyer to the Defendants, Marshal Abubakar said the Police claim to have handed the case file to a Deputy Inspector General (DIG) of Police for further prosecution.

He explains that the DIG who was called to produce the Defendants claimed to have handed the case file to the Director of Public Prosecution on the instruction of the Attorney General of the Federation (AGF).

Sowore and the other defendants are standing trial for alleged criminal conspiracy, unlawful assembly, and inciting public disturbance.

A Chief Magistrate Court in Abuja had earlier on Tuesday fixed today, January 8, for ruling on the bail application filed on behalf of Sowore and four others.

Chief Magistrate Mabel Segun-Bello was expected to rule on the bail application today.

The court also on Tuesday ordered the defendants to be remanded at the Force CIID facility in Area 10, following complaints by Sowore that they were denied food and medical attention at the Kuje Correctional Centre. 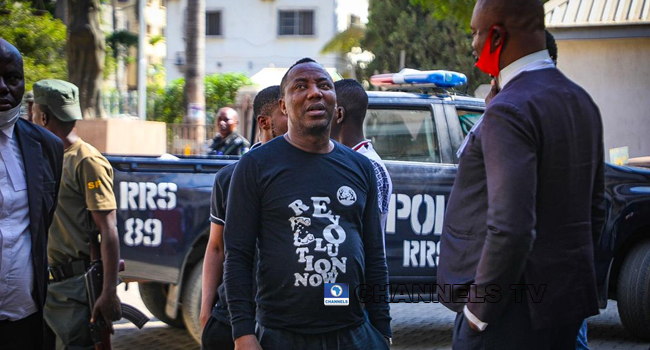 A Magistrate court sitting in Wuse Zone 2, Abuja has ordered the remand of Omoyele Sowore and four others at Kuje Correctional Centre.

This is pending when their formal bail application will be heard Tuesday, January 5, 2020.

The Magistrate, Mabel Segun-Bello while ruling on the oral bail application said all the charges are bailable, except if the defendants are deemed likely to evade trial or commit the same offence.

She asked that the formal bail application should be brought before here at 11:00 a.m. on Tuesday and ordered that the defendants be allowed access to medical attention and to a lawyer of their choice.

Sowore is being arraigned alongside four others by the Federal Government on three charges of criminal conspiracy, unlawful assembly, and attempting to incite others.

Although they all pleaded not guilty to the charges, the prosecution alleged that the defendants were arrested on New Year’s eve with placards calling for a violent revolution against President Muhammadu Buhari. “How about a crossover protest/uprising tonight? Anyone willing to participate? Pick up a candle and a placard showing your grievances against the regime; let’s upload our short videos and photos across our social media platforms. Let’s welcome the regime to a resolute 2021!

“#CrossoverWithProtest against tyrant @mbuhari’s regime, candlelight for #LekkiMassacre; a placard for #EndBadGovernment; procession to usher in #Revolutionary 2021, a fist for victims of repression-frozen bank accounts, malicious prosecution and detention of #Endsars activists.

“#Crossoverwithprotest starts at 11.30 till 12.30 am across Nigeria, a candle, a placard and fireworks to usher in a RESOLUTE 2021 in Nigeria! Join with your friends and neighbours ‪#EndSARS. ‪#ObigboMassacre ‪#LekkiMassacre ‪#EndBadGoveranceInNigeria ‪#BuhariTrainwreck ‪#RevolutionNow,” Sowore tweeted on Sunday, December 31, 2020.

#CrossoverWithProtest against tyrant @mbuhari’s regime, a candlelight for #LekkiMassacre; A placard for #EndBadGovernment; procession to usher in #Revolutionary 2021, A fist for victims of repression-frozen bank accounts, malicious prosecution and detention of #Endsars activists https://t.co/x1IckSmlXy

The protest was eventually joined by others in states including Ondo and Kaduna. 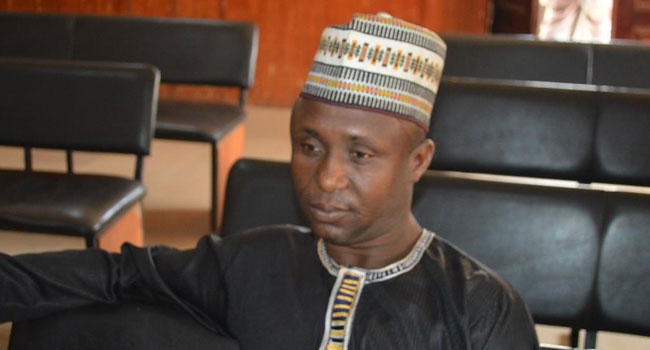 A High Court of the Federal Capital Territory (FCT), Gwagwalada, has sentenced an officer with the Kuje Correctional Centre, Ahmed Abdu, to a four-year jail term for engaging in employment scam.

Abdu was charged before the court in 2014 by the Independent Corrupt
Practices and Other Related Offences Commission (ICPC) for defrauding
one Adamu Abubakar of N250, 000.

While handing down the sentence, Justice Abubakar Kutigi said
it would deter other government officials that may want to take
advantage of the unemployment situation in the country to defraud
unsuspecting job seekers.

He was also said to have collected the same amount from five other
persons to get them employed into any of Nigeria Immigration Service,
Nigeria Security and Civil Defence Corps and Nigerian Correctional
Service, and signed an undertaking to refund the money if he failed to
deliver.

ICPC, in a two-count, told the court that the convict used his
position as a public officer to hoodwink his victims into paying money
for jobs that did not exist.

Prior to the sentencing, Abdu who was not represented by a counsel,
pleaded with the court to be lenient with him, adding that he was a
first-time offender, as well as, the first child of his family with a very large number of dependants.

Counsel to ICPC, Ngozi Onwuka, in her submission, prayed the court to
direct Abdu to make restitution by refunding the monies he collected
from other victims to them.

Justice Kutigi, in his ruling, said that even though the court was
mindful of Abdu’s plea for leniency, he was only allowed to apply the
dictates of the extant laws upon which he was charged.

He said that the facts before the court had shown a consistent trait of
the convict using his position as a public officer to lure unsuspecting job seekers to pay for non-existent jobs.

He, therefore, sentenced him to four years imprisonment – two years on
each count – with no option of fine, and that the sentences would run
concurrently.