The Director, Defence Information, Major General Chris Olukolade on Wednesday said the Nigerian Army will soon re assert Nigeria’s sovereignty in portions that have been violated illegally by Boko Haram.

“We are definitely working to reverse all those tendencies. We are not conceding any portion of this country to a group of terrorists and the required operation to reverse that is ongoing”, he said, assuring that the Army “will re assert in a short while the sovereignty of any part of the country that has been violated illegally by some irresponsible elements.

“We are working to ensure that not just Gwoza as a town, its surroundings and other portions that terrorists seem to be moving around is secured”. He further assured Nigerians “that we are sure we will accomplish in a short while”, he said, while speaking via a telephone interview on Channels Television’s Sunrise Daily.

Major General Olukolade said the loan sought by the presidency became imperative as the funds are being used to upgrade their equipment to meet the challenges of the moment. He also noted that “on a regular basis we require and we are sure we will get the regular upgrading that is required to conduct this operation properly” adding that “we are encouraged that the political authorities and Nigerians have appreciated the need for the military to be properly equipped to handle this operation”.

He said the military are already receiving upgraded weapons but stressed the need for the soldiers to “upgrade their response”.

He further noted that the help received from allies “is improving” at the moment, but added that “most importantly is the understanding we enjoy both from our allies in the neighborhood as well as those who have come from other countries to assist us.

“In many instances we exchange ideas, we are exchanging intelligence and much of the cooperation we continue to get and we believe it will keep improving until our situation for as far as our situation is understood”, he said.

He further opined that the cooperation by the Multi National Joint Task Force (MTNJTF) has been enhanced by the Security Summit convened by French President, François Hollande.

He however, stressed that the partnership to fight insurgency within the “neighborhood” has been in place before the Summit, adding that “the patrol allows us to exchange ideas and various elements of containing terrorism in the neighbourhood.

“There has been improvement in various elements of patrol, in terms of equipping, even from the part of Nigeria, to enhance the capability of our men to join in the patrol to contain the various movement of terrorists particularly in the Chad Basin area; we have captured a lot of these terrorists recently” insisting that “there operations has largely been contained in that area”.

The Army Spokesman further revealed that “we have more patrol boats to patrol the lake and we are having more joint operations with the troops from Chad, Niger and Cameroon in both land and water patrol in that area”

He also debunked reports that Nigerian soldiers fled to Cameroon after a gun duel with suspected Boko Haram insurgents in Gamboru-Ngala, Borno State.

The Defence Headquarters had yesterday confirmed the return of the troops from Cameroon, adding that they were addressed by the General Officer Commanding, 3 Division, Major General John Zaruwa, as they embark on another mission in the Counter Terrorism campaign.

The Nigerian Defence headquarters on Monday clarified issues concerning Nigerian troops who found themselves in Cameroon during a fierce battle with terrorists. 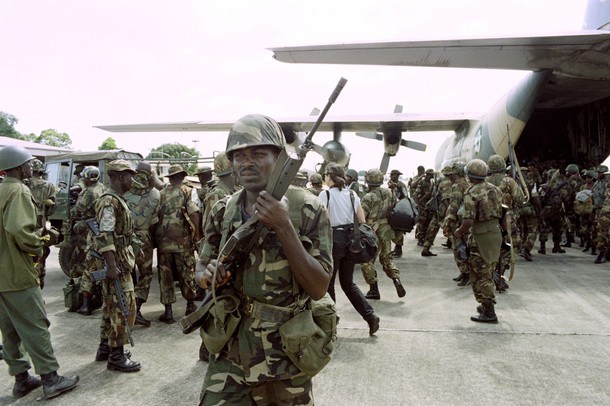 First batch of 80 Nigerian military contingent to the African led international peace support mission in Mali have departed to Mali and the Chief of Army Staff has claimed the deployment enhance the federal government fight against Boko Haram.

They were airlifted by a Nigerian Air Force cargo plane to Mali through the Kaduna international airport.

The remaining 826 are to be airlifted from tomorrow.

The Chief of Army Staff, Lieutenant General Azubuike Ihejirika, said the contribution of Nigeria in the restoration of peace in Mali will complement the federal government’s efforts in the fight against Boko Haram insurgence in the country.

General Ihejirika who was addressing the first Nigerian battalion to African led international peace support mission in Mali, said the crisis in Mali which has become a global concern has attracted intervention from the international community.

He said that some of the members of Boko Haram sect had undergone training in Mali.

A total of 906 personnel of the Nigerian army had undergone a four week pre-deployment training at the Nigerian Army Peacekeeping Centre Jaji, Kaduna where they were trained on various skills ahead of the deployment.

The Nigerian soldiers will be joining troops from other countries, as part of an African force to fight against Islamist militants in the West African nation seeking to seize and overthrow the government.

The Chief of Army Staff, Lieutenant General Ihejirika charged the soldiers to stick to the rules of their engagement if they must succeed in the enormous task, which is necessary to aid the fight against Boko Haram in the country.

He also commissioned operational vehicles for the peace mission in Mali.

The commandant of the centre, Major General John Zaruwa, noted that the training was designed to suit the operational environment while expressing confidence that the battalion will live up to expectation.

“They are not peacekeepers, they are peace enforcers. And they are trained to use all means including force to restore peace in Mali” he explained.

The Nigerian contingent are going to an unfamiliar terrain in Mali to face a versatile adversary who observers say are determined, well-equipped and well-trained.

In the light of this, many have raised fears about the adequacy of preparations towards the welfare of the families they have left behind.

But the Chief of Army Staff said there is no cause for alarm as he wished the soldiers good luck while in Mali. He also reminded them to be disciplined and make the country proud