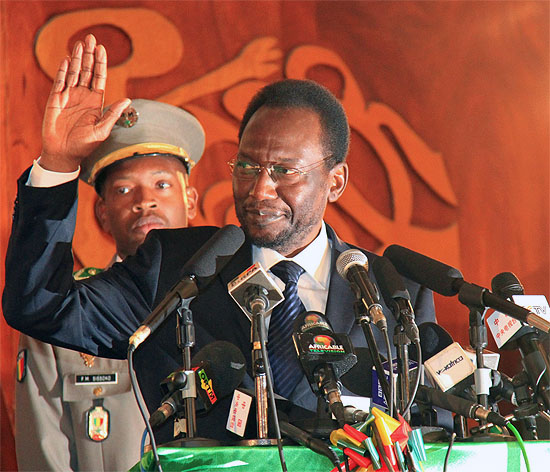 Mali’s neighbours agreed to shut their borders with the West African country on Monday as part of tough sanctions aimed at forcing the leaders of last month’s coup to step down.

Leaders of the 15-member Economic Community of West African States, ECOWAS, also announced they would “activate” the region’s standby military force, though it was unclear when any troops would deploy and with what mandate.

“All the diplomatic, economic, financial and other measures will be applied from today and will remain in place until constitutional order is re-established,” Ivory Coast President Alassane Ouattara said after a summit in Dakar, Senegal.

The closure of borders will suffocate the landlocked economy of Africa’s third biggest gold miner by cutting it off from the imported fuel on which it depends.

Mali will also be starved of funds from the regional BCEAO central bank, which manages the money supply in the West African zone, while individual members of the junta will face travel bans and asset freezes.

“We call on the armed groups to halt their advance towards the south,” Ouattara added. He said ECOWAS military chiefs would discuss later this week how to “activate” a standby ECOWAS force, but gave no detail on when and how it would be deployed.

In Mali, the junta reaffirmed that it was ready to consult with civilians over a transition of power but said the priority remained the fight against the rebels whose stated aim is to carve out a homeland in Mali northern desert region.

“The CNRDR (junta) would like to reiterate that the most important priority at the moment is Mali’s territorial integrity,” it said in a statement read on state television.

People in the streets of the capital Bamako viewed the prospect of a trade embargo with dismay.

“It is a bit severe because the junta has not refused to step down. This is going to hurt ordinary Malians,” said 31-year-old Yaya Kane.

The stated aim of the coup by disgruntled soldiers was to give the army more power to tackle the two-month-old rebellion, but it backfired by emboldening the rebels to make further gains in what is the latest security threat to a troubled region.

Residents in the ancient trading post of Timbuktu said local Ansar Dine Islamists, who seized the town alongside Tuareg separatists on Sunday, had now gained control of the town and said they would impose Islamic law.

In the northern city of Gao, locals said Islamists were ransacking bars and hotels serving alcohol. In Kidal, the third main town of the region, a resident said music had been barred from radio stations and Western-style clothes banned.

“Ansar Dine people have entered the town and they are saying that they are now in control,” a tourist guide in Timbuktu, who declined to be named for fear of reprisals, told Reuters. “They have said they will institute sharia.”

A local nurse said that the separatist Tuareg-led MNLA had mostly been in control on Sunday, but had since been pushed to the outskirts of town by the Islamists.

“There was a little fighting between the two. But the Ansar Dine were better armed than the MNLA,” said the nurse.

In Gao, 300 km (200 miles) further east, food, fuel and medicines were starting to run out. The region was already suffering shortages because of the failure of last year’s rains and fighting that began in mid-January.

The aid agency Oxfam said over 200,000 Malians had fled their homes since January, around half into neighbouring countries, and that the refugee crisis could worsen.

A resident in Gao said the town was currently under the joint control of Ansar Dine and the MNLA group, and that some rebels were ransacking the warehouses of aid agencies including U.N. World Food Programme and Oxfam.

“They have destroyed everything, including attacking the hospital where there were sick people,” said the resident, who also refused to be named.

“The religious guys – Ansar Dine – attacked the hotels and nightclubs, saying such places are against their religion.”