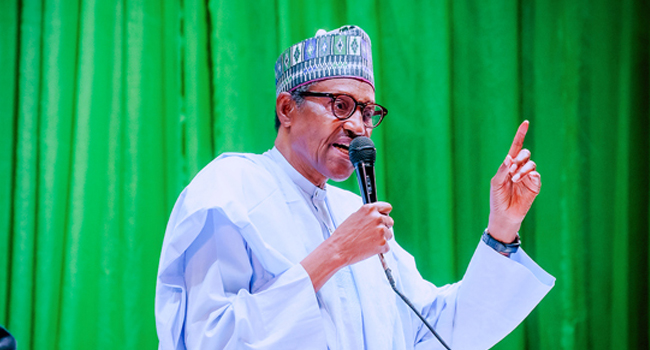 President Muhammadu Buhari has extolled the leadership qualities of men and called on them to take the front seat in protecting the nation’s assets.

Buhari made the call while rejoicing with them on the 2022 International Men’s Day (IMD).

“On the theme of this year’s IMD, ‘Men Leading By Example’, President Buhari calls on men to take the front row in safeguarding and protecting national assets and shun acts of violence, like targeting of the offices and stores of the electoral body, which only adds to the cost of governance and projects the country as unstable,” presidential aide Femi Adesina said in a statement issued on Friday.

He noted that men play key roles in ensuring a safer and more peaceful environment.

“The President reiterates the pivotal role of men in ensuring a safe, peaceful and progressive environment, given their visible positions in families, governments, communities, and leadership in religious, traditional, and political institutions,” Adesina added.

“While recognizing the strong, influential, and significant position of women in building the nation over the years, with evidence in their rising profiles, the President specially urges men to be guided in protecting and promoting democracy in Nigeria, by ensuring full participation in the forthcoming elections, 2023, adhering to regulations of the electoral body, Independent National Electoral Commission (INEC) and exploring redress in the courts.”

According to the Nigerian leader, the citizens’ voice matters in the choice of their leaders as he called on men to show good examples.

“President Buhari believes every citizen’s voice and vote matters in the choice of Nigeria’s leadership and governance, urging men in the country to provide the needed example of decency and decorum and mobilize for the greater good of nation-building,” the statement further read.

“The President commends the Local Organizing Committee of the IMD for setting an agenda for the 2023 elections and remaining faithful in sensitizing men to be more patriotic, responsive, and inclusive in decision making, at home, and in the public.” 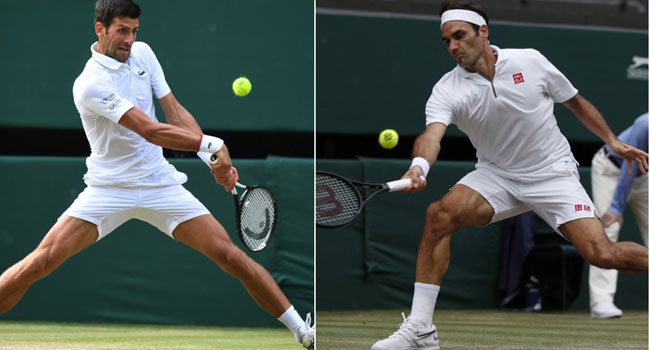 — With Djokovic and Federer in the final, the winner of Sunday’s match will extend the streak of Grand Slam titles won by the ‘Big Three’ of the pair plus Rafael Nadal to 11 straight major titles. Since Federer won his first Grand Slam title at Wimbledon in 2003, just five Grand Slam finals have been contested by pairs of players outside the ‘Big Three’.

— At 37 years 340 days, Federer is bidding to become the oldest player in the Open era to win a Grand Slam men’s singles title.

Ken Rosewall is the only 37-year-old to have won a major singles title in that time – he won the 1972 Australian Open aged 37 years 62 days.

Federer to level Navratilova with nine? 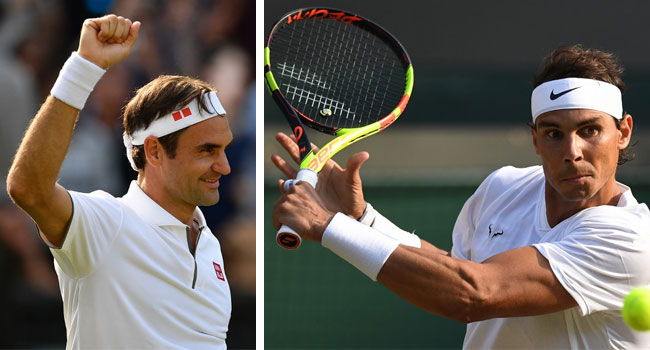 Roger Federer and Rafael Nadal battle for a place in the Wimbledon final on Friday, 11 years after they mesmerised Centre Court in a Grand Slam championship match widely regarded as the greatest ever played.

Nadal emerged triumphant that day, winning in five sets in a four-hour 48-minute epic of fluctuating fortunes that stretched out over seven hours because of constant, momentum-shifting rain interruptions.

Over a decade later, the sport’s two most successful players now have 38 Grand Slam titles between them and more than $100 million in prize money each.

However, it is eight-time champion Federer who just edges their Wimbledon head-to-head 2-1 after winning the 2006 and 2007 finals before Nadal famously broke the spell in 2008.

Nadal, who demolished Federer in straight sets in the semi-finals at Roland Garros last month on his way to a 12th title in Paris, admits his game has developed since 2008.

Mostly, that’s due to his age as well as the desperate need to protect his creaking knees which so often conspired against him on the low-bouncing lawns of the All England Club.

“I am running less so I need to serve better. I probably cannot play 20 weeks a year any more,’ said 33-year-old Nadal.

“I am serving better. I am hitting the backhand better. Maybe volleying better, slicing better.”

In terms of the bare statistics, there is little to choose between them.

Nadal has served up 47 aces so far and been broken just four times; Federer has 42 aces, dropping serve on only three occasions.

The Spanish third seed has yet to face a seeded player and has only been truly tested once, in his four-set second round victory over Nick Kyrgios in what was comfortably the tournament’s most bad-tempered match.

He is in his 13th semi-final at the tournament and 45th at the majors.

In a career illuminated by landmarks, he became the first man to register 100 match wins at a single Slam when he came back from a set down to beat Kei Nishikori in the quarter-finals.

‘Rafa can hurt you’

Federer is wary of the dangers presented by Nadal.

His loss in Paris, which took place in what he described as “insane” windy conditions, was his heaviest at the Slams in 11 years.

“Rafa really can hurt anybody on any surface,” said Federer.

“He’s serving way different. I remember back in the day how he used to serve, and now how much bigger he’s serving, how much faster he finishes points.”

The eager anticipation of their 40th clash has relegated defending champion Novak Djokovic’s push for a fifth title to second billing.

The top seed and world number one reached the semi-finals for the ninth time, racking up his 70th career win at the All England Club by sweeping past David Goffin in straight sets, reeling off 15 of the last 17 games.

In his 36th Grand Slam semi-final, the 15-time major winner faces Spain’s Roberto Bautista Agut who is in his maiden last-four at the majors at the 27th attempt.

Djokovic leads the 31-year-old 7-3 in career meetings, including 3-0 at the majors.

However, the unheralded Spaniard, who had to cancel plans for his stag party in Ibiza as a consequence of his run to the semi-finals, has defeated Djokovic twice in 2019, in Doha and Miami.

“The ball bounces lower on the grass, which is I think more suitable to his style of game.”

Should Djokovic win, it would be the 22nd occasion that a Grand Slam final has been contested by two of Djokovic, Federer and Nadal.

For the second straight year, all four of the men’s semi-finalists are aged 30 or over.

This year’s final four have also set the record for the oldest combined age of Grand Slam men’s singles semi-finalists in the Open era. 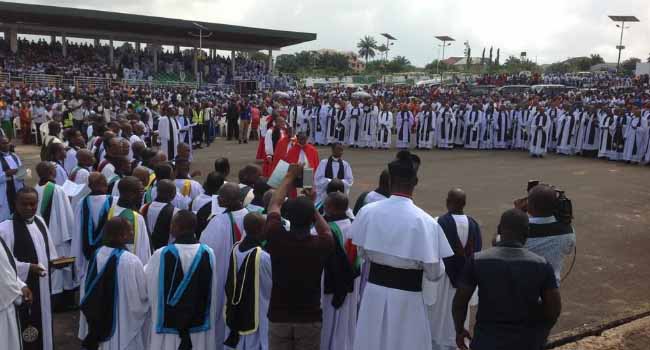 Over 10,000 clergymen, men, women, youths and children of the Anglican Communion family, have gathered to seek God’s intervention in the face of the numerous challenges facing the country.

The 2016 Anglican Prayer Rally held at Dr. Alex Ekwueme Square, Awka, pulled people from the nine dioceses of the Ecclesiastical Province of the Niger.

The prayer led by the Archbishop of the Province of the Niger and Bishop of Aguata Diocese Anambra, Most Reverend Christian Efobi, also sought God’s wisdom and direction, on behalf of the leaders of the country.

Prayers were equally said for the church to continue to wax stronger in the face of tribulation and temptations.

Delivering a sermon on the topic, “Prayer for Boldness,” the Bishop of Mbamili Diocese, Right Reverend Henry Okeke, taking a biblical perspective, urged the church to embrace prayers in the face of challenges.

He said, “all we need is boldness to speak, because it is in the hands of God to take care of the enemies.

“When He directs us on how to pray, He is the bulldozer. The early Christians understood this and that was why they never joked with prayers.”

Mr Udu said that Nigerians were facing a lot of difficulties presently and speaking of Anambra state, he said “we realized that there is a connection between prayer and good governance and that is why we support everything the church is doing, because without God all is in vain.”

He stated that the present economic recession in the country had resurrected a lot of crimes which according to him, Governor Obiano however circumvented in Anambra by introducing an economic stimulus package to cushion the effect of recession on the people and also ensured that workers’ salaries were paid promptly.

Speaking on the importance of the programme, which was instituted three years ago, the Bishop of Awka Diocese, Right Reverend Alex Ibezim said that it was aimed at seeking God’s intervention during difficult times such as the current economic recession.

Bishop Ibezim noted that, “not only that prayer is important, prayer energizes us in order to fall into the perfect will of God.”

He decried the increased suffering in the country, the high level poverty and untold hardship that had held the poor masses down, “look at the rate of poverty, things are very hard.

“A bag of rice is twenty five thousand Naira, will mothers be able to feed their children?.”

Furthermore, the bishop called on the leaders of the nation to ensure that the infrastructural developments they embark on were the ones that would benefit the poor masses.

“Let them forget about maybe building of airports, they should construct the roads. 90% of the people move on the roads,” the bishop said

He concluded that it was a miracle that most Nigerians were still alive in the face of acute hunger, inflation and scarcity of money and food.

Similarly, Reverend Okeke, pointed out the fact that the present challenge in the country is beyond the leaders because “they are also human beings”.

With the next prayer rally being fixed for November 4, 2017, he as well as the people expressed hopes that the country would overcome the hard times as soon as possible and would return with thanksgiving.