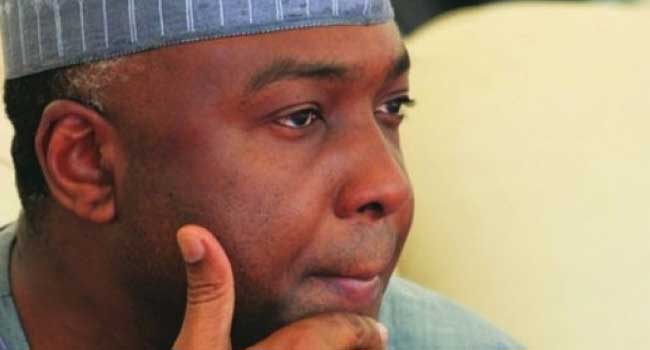 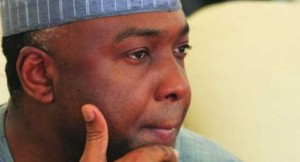 The trial of Senate President, Dr Bukola Saraki, over charges of alleged false declaration of assets has commenced.

The trial of the former Minister of Niger Delta Affairs, Elder Godsday Orubebe, was stood down to accommodate the Senat President’s trial.

Though counsel to Orubebe complained, he was over ruled by the Chairman of the Code of Conduct Tribunal (CCT), Justice Danladi Umar.

Parties to the case announced their appearance before the cross examination of the Chief prosecution witness, Mr Michael Wekpas began.

The witness was told to go through some of the exhibits he tendered as evidence and he confirmed that his investigation of the defendant’s GTB account shows there are transfers to a foreign account.

He also confirmed that there are several telex transfers on the account, some of which are before the Tribunal as exhibits.

According to him, all the telex the investigating team requested were on almost all the debit transactions consummated on that particular account which showed that the defendant gave instructions for a “tea transfer”.

He further maintained that the investigation team had no doubt that the transaction was made to the American Express Bank in Europe, because the debit on the account of the defendant was done and the narration was clear on why and where the money was transferred to.

He added that the prosecution team further requested for additional information and evidence to show proof of the transaction and several of the instructions and telex were provided by the bank .

He, however, noted that that there is an affidavit and police statement to show that some of the documents and telex were burnt, hence his inability to tender them as evidence.

According to him, he is still flipping through to see if the telex that relates to count 11 of the charges was one of the ones the bank said was burnt and that they couldn’t provide, insisting that the transfer was effected.

This is the second day of trial since the Chairman of the Tribunal ruled that the hearing will now be on a day-to-day from 10:00am to 6:00pm.

Mr Wekpas has on Tuesday admitted that neither he nor his team investigated some of the exhibits he had tendered before the Tribunal.

Mr Wekpas, who is an operative of the Economic and Financial Crimes Commission (EFCC), under cross-examination by the defence counsel, Kanu Agabi, told the court he did not investigate the petitions, whose exhibits were tendered before the court.

He said that even though his investigation stemmed from an intelligence report obtained by the EFCC, he did not have the report, neither was the report before the Tribunal.

The witness was first questioned on exhibit 11, 12, and 13, which were petitions written by a group known as Kwara Freedom Network, inviting the EFCC to investigate the Kwara State Universal Basic Education Board and borrowings for projects.

Mr Wekpas, who had earlier told the Tribunal that the petition formed the bases of his team’s investigation, however, said he did not investigate the petition, rather another team carried out the investigation.

When asked why he tendered documents he did not investigate, the witness said he carried out the directive of the prosecution.

Also under cross-examination, the witness admitted that investigating the assets declaration of the Senate President did not form part of his schedule of duty.

He explained that three exhibits, which were assets declaration forms of the defendant, were duly examined and stamped by the Code of Conduct Bureau when the documents were shown to him

Mr Wekpas said there was nowhere in the petition that they investigated ‎where Saraki’s asset declaration was in contention.

He said the investigation of the defendant was based on intelligence report obtained by the former Chairman of the EFCC, Ibrahim Lamorde and not the three petitions tendered as exhibits and that such intelligence was either provided orally or produced in writing by people who asked to remain anonymous.

The witness stated that the six assets declaration forms submitted by Senator Saraki to the Code of Conduct Bureau were not investigated by his team.

He, however, said his team was directed to investigate the intelligence report alone.

According to him, the intelligence report is not before the Tribunal as exhibit.

Attempt by the prosecution to seek for a long adjournment to enable it study the documents tendered as exhibits was rejected by the Tribunal.

The defence is expected to continue the cross examination of the witness on Wednesday. 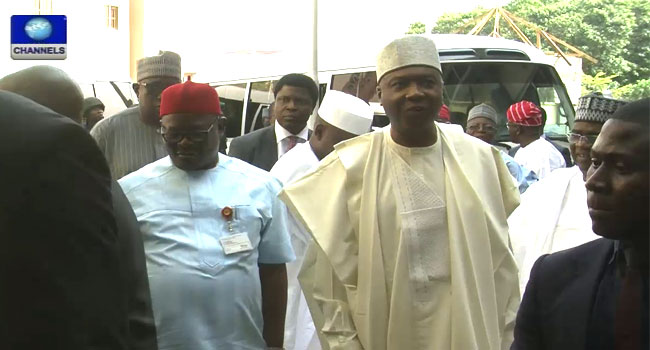 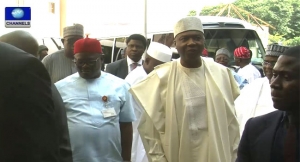 Some supporters of Nigeria’s Senate President, Bukola Saraki, on Monday besieged the Code of Conduct Tribunal to protest against his trial for alleged false declaration of assets while in office as the Governor of Kwara State.

The peaceful protesters, showing solidarity with the Senate president, had placards with different inscriptions – “Nigerian youths and students stand firm with Saraki. Let the Senate continue working and no to the ongoing witch hunt of Saraki”.

But their protest did not stop the prosecution from leading one of its witnesses in presentation of evidence against the defendant.

A prosecution witness, Michael Wekpas, continued his testimony before the Tribunal and tendered 17 documents to support his claim that the Senate President did not declare all his assets and in some cases made anticipatory declaration.

Mr Wekpas told the Tribunal that there were instances where the Senate President declared some property at the beginning of his tenure as Governor in 2003 and left others out, which he later declared in 2007 and 2011 respectively.

He also alleged that the Senate President made anticipatory declaration of his property on McDonald Street, Ikoyi, which were numbers 15a and 15b, when the records of the presidential implementation committee on the sales of Federal Government property revealed that the property was only listed as number 15.

He told the Tribunal that out of the two property belonging to the Senate President at numbers 1 and 3 Targus Street, Maitama, the Senator Saraki consistently declared only number.

According to him, even though the Senate President was not the Managing Director of one Carlisle Properties and Investment Limited, by his own admission, he had controlling shares and was the beneficiary of the funds accruing to the company.

Immediately after the examination in chief ended his testimony, the defence began its cross examination.

In his response to questions asked by the defence lawyer, the witness said he did not receive any correspondent from the Kwara State government of any missing funds, neither did he conduct a forensic examination on Kwara State accounts.

He also told the Tribunal that he was not aware that the Kwara Freedom Network, the organisation that petitioned the anti-graft agency, is a fictitious organisation.

The witness, however, said that there was substance in their petition which had been revealed by the investigation.

The defence, however, asked for time to study the documents rendered as evidence before the case would continue.

But the Chairman of the Tribunal, Justice Danladi Umar, said the trial would continue on a day-to-day basis.