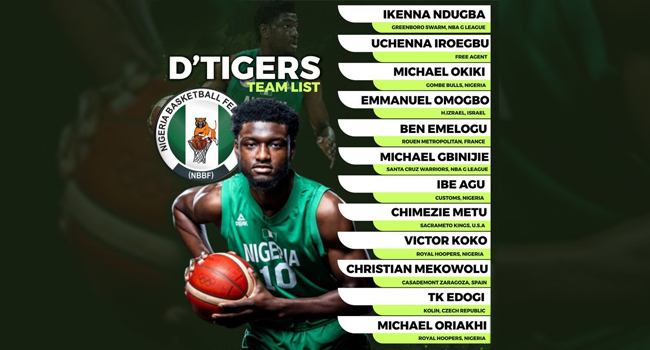 The Nigeria Basketball Federation on Tuesday released a 12-man roster for the window of the FIBA African World Cup qualifiers in Kigali.

This follows a decision by the FG earlier in the week to rescind its decision to suspend Nigeria’s basketball teams from all international competitions.

D’Tigers teams will be led by Alan Major who deputises for the team’s Head Coach, Mike Brown that just got named Coach of the Sacramento Kings. and  Ogoh Odaudu will assist him.

Currently ranked first in Africa, Nigeria will open its campaign against Cape Verde on Friday, 1 July before taking on Mali on Saturday. The last game will be against Uganda on Sunday, 3 July at the BK arena in the capital city of Kigali.

The top three teams from each group will advance to the second round where each team will play six games. The two top teams in each group, along with the best third-placed team, will qualify for the FIBA Basketball World Cup 2023. 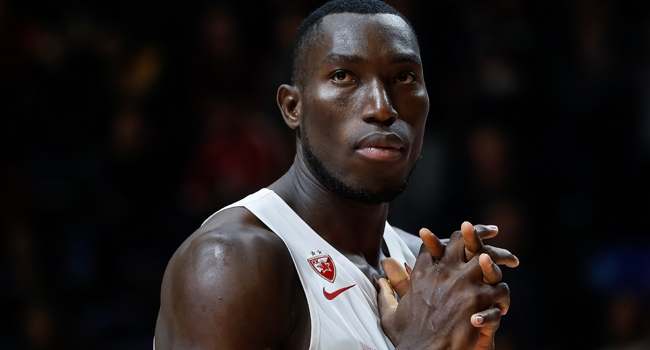 The Nigeria Basketball Federation has paid glowing tributes to former D’Tigers invitee, Michael Olalekan Ojo who died during a training session after suffering a heart attack.

“This is another flower that unexpectedly withered at such a time it was expected to start blossoming,” NBBF President, Engr Musa Kida said of the 27-year-old.

“After a sterling college career in the United States of America and after securing a professional deal in Belgrade, it is so sad that the basketball world has been robbed of this emerging talent who has been described as one of the tallest to play basketball in Serbia.”

“I met with him in February at the FIBA Women’s Olympic qualifying tournament in Serbia. I watched his match against Partizan Basketball. He was such a calm and unassuming personality.”

The North-Central Representative on the board, Isah Umah described the late centre, who won the 2019 Serbian Professional League with Crvena, as humble and hard-working.

Umar who was D’Tigers Team Manager when the team was preparing for the 2011 FIBA Afrobasket when Ojo was invited to the National team revealed that he was a true Nigerian who bled green and white.

“He was excited to be part of Team Nigeria and gave his best at such a young age. He did not make the final cut, but he was excited to have a chance to play for his fatherland.”

During the 2019–20 season, Ojo appeared in 22 EuroLeague games with Crvena Zvezda, averaging 4.1 points and 3 rebounds per game while appearing in about 108 games for his club before his untimely demise as teams were preparing for life after the Covid-19. 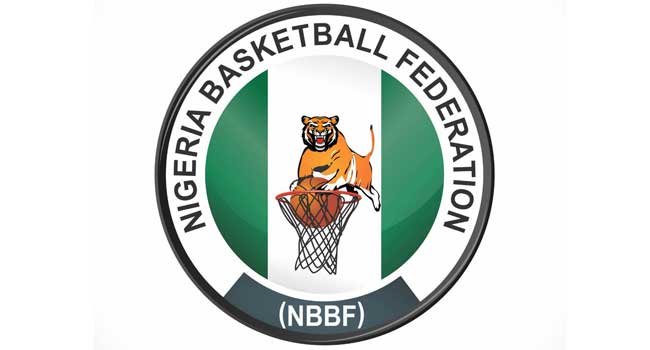 The 2019 NBBF Men’s Premier League season dunks off from October 13 to November 30.

The men’s league will see teams divided into the Atlantic and Savannah Conferences for a round robin league format.

First phase of the Atlantic Conference will hold in Akure while Savannah teams will converge on the Indoor Sports Hall of the Ahmadu Bello University, Zaria between October 12and 22.

The second phase will take place from November 2to 12 with all points scored in the first phase carried over.

The Savannah Conference train will move to Package B of the National Stadium, Abuja while Atlantic Conference Teams will battle for supremacy at the Indoor Sports Hall of the Ilorin Township stadium.

Top 4 teams in each conference will qualify for the National Final 8 from November 24to 30.

Oluyole Warriors (Ibadan), Customs (Lagos), Rivers Hoopers (Port Harcourt) Kwara Falcons (Ilorin), Hoops and Read (Lagos), Delta Force (Asaba), Police Baton (Lagos) and Raptors (Lagos) are some of the teams that will be competing for honors in the Atlantic Conference.

According to NBBF President, Engr Musa Kida, exciting times await teams, players, fans as well as keen observers of the league with the federation in discussion with prospective sponsors.

“We are trying to create a robust system that will translate to a win-win situation for all.

“We are currently at an advanced stage of discussion with interested parties who are thinking of investing in the men’s league with our ultimate goal of getting the various leagues back on TV.”

The League champion will qualify to represent Nigeria in the inuagural Basketball Africa League to be organized by NBA in conjunction with FIBA Africa. 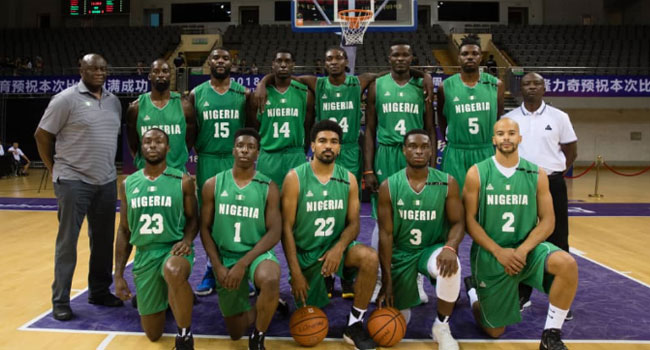 In its quest to adequately prepare the D’Tigers for the 2019 FIBA World Cup in China, the Nigeria Basketball Federation (NBBF) has lined up multiple grade-A friendlies against the Dominican Republic and Canada for the team.

D’Tigers two-legged encounter against the Dominican Republic will take place in Santo Domingo between July 19th and 25th before playing Canada in Quebec and Ontario between August 5th and 11th 2019.

According to arrangements put in place for the team, D’Tigers will open camp in the United States of America before moving to Canada.

Lagos will be the venue of the final phase of preparation with the Federation already in advanced talks with a yet to be announced World Cup-bound team for a 2-legged friendly.

NBBF President, Musa Kida, disclosed that the Federation is determined to give the team the best preparation that it can afford to ensure that the team does the nation proud in China when the World cup starts in August.

“We have locked down 2 grade A games with the Dominican Republic and Canada who will both be at the World Cup. These games alongside those we are still planning to organize when the team comes to Lagos, we believe, will provide quality tests for the team,” he stated.

READ ALSO: Chelsea Up To Third As Jeers Turn To Cheers

Kida revealed that though the choices of campsites in the USA and Canada have not been made due to quality of facilities, playing personnel and funds.

According to him, agreements have been concluded with the Canadian and Dominican Republic Basketball Federations for the games.

Meanwhile, the team is also registered to participate in a friendly tournament featuring some teams that will take part in the Mundial in China between 21st and 26th of August.

The Nigerian team led by Alex Nwora is drawn in Group B alongside Argentina, Russia and Korea with all its group games to be played in Wuhan. The 2019 FIBA Basketball World Cup will take place between August 30th of and 16th of September 2019.

World basketball ruling body, FIBA, has issued Nigeria Basketball Federation (NBBF) an ultimatum to resolve the leadership dispute within the Federation before November 30.

Two separate elections were held in Kano and Abuja during the Sports Federations Election on June 12 and 13 producing two separate boards.

FIBA has however informed both parties that the country faces possible suspension from the sports if the issues are not resolved before the stipulated date by the Nigerian Olympic committee.

FIBA also added that regardless of any sanctions, it will appoint a task force that will take any appropriate measures in the interests of basketball in Nigeria.

The Oturkpo-based alleged that their players and officials were attacked by fans of Niger Potters in Minna.

This forced the game at the college of education basketball arena to be abandoned with the scoreline at 48 to 42 points.

President of Mark Mentors, Igoche Mark wants the NBBF to investigate the incident.

The Nigeria Basketball Federation (NBBF) has confirmed the eight clubs that will feature in the finals of the 2017 Women League.

Others are former champions Dolphins of Lagos, Customs of Lagos, Delta Force of Asaba and GT2000 of Abuja.

According to the NBBF, the final eight runs from July 24 to 29 with an all-star game on July 28 at the National Stadium in Surulere, Lagos. The All-Star game is billed to hold today at the Kofomata Stadium in Kano.

Rivers Hoopers Head Coach, Ogoh Odaudu, will lead the Atlantic Conference team following his side’s lead on the log, while Abdulrahman Mohammed of Gombe Bulls will manage the team from the Savannah Conference.

Musa Ahmadu-Kida has been elected as the new President of the Nigerian Basketball Federation (NBBF).

Ahmadu-Kida was returned unopposed at an election held in Abuja which was supervised by the Nigerian Olympic Committee and the Sports Ministry.

Also elected into the new board is Babatunde Ogunade who retains his position as Vice President.

It was the second election for the NBBF after another poll which was conducted on Monday in Kano, brought in Tijani Umar as the Body’s President.

The Nigeria Basketball Federation (NBBF) says all is set for the commencement of a women basketball league with effect from Monday, April 10, 2017.

President of the Federation, Tijani Umar, made the disclosure on Sunday while addressing reporters in Abuja, the Federal Capital Territory.

Mr Umar explained the format of the league, adding that the introduction of a women basketball league is aimed at developing the game in Nigeria.

The Captain of D’Tigers, Olumide Oyedeji, also urged women basketball clubs to address the welfare of players, stressing that the league will not allow same day travel plans for any team.

The Nigerian Basketball Federation (NBBF) is set to sign a deal worth 12 million dollars that would fund its activities in the next five years.

This comes amidst the controversies around the release of funds allocated to sports federations in the 2016 budget.

President of the federation, Mr Tijani Umar, while addressing newsmen during the federation’s annual general meeting in Abuja said that the federation is finalising details of the agreement which is aimed at taking basketball in Nigeria to a higher level.

Also present at this meeting was the chairman of the House of Reps Committee on Sports, Bukar Goni, who assured Nigerians that the National Assembly was working towards a seamless implementation of funds allocated to federations in the 2017 budget. 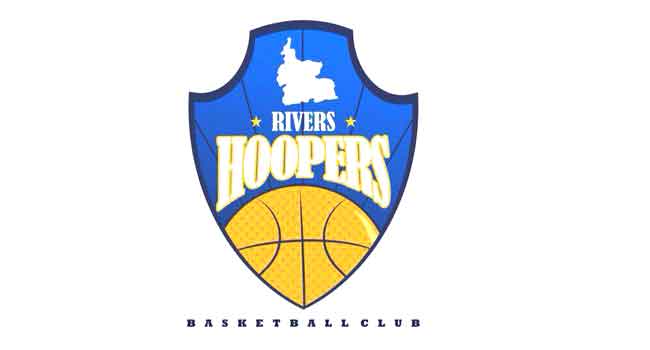 The Rivers Hoopers head coach, Ogoh Odaudu is optimistic his team will do well at the Conference play offs in Lagos.

The two-time Nigeria Basketball League Champions will fight for a place in the last four in the Atlantic Conference after finishing third in the regular season.

A confident Odaudu is working towards avoiding errors that would dent his side’s chances of playing in the finals of the current campaign.

Odaudu believes the team is learning and getting better. “We are picking up gradually and the regular season games are for you to make your mistakes and correct them going into the play offs”.

“You will see a different Rivers Hoopers team when we get to the play offs because we are not going to make the kind of mistakes we made in the league.

“You lose one, you put yourself in a very serious trouble. So we are going to take every game as it comes.”

Meanwhile, the Benue-born coach has called for strict measures to be taken on match officials who falter in their responsibilities.

“They should be strict with the table officials and the referees.

A basketball game is supposed to be played with three referees but we are managing two and when one doesn’t show up entirely, it doesn’t speak well for the game.

NBBF should take disciplinary measures on any referee or match commissioner that refuses to show up for any game.” Odaudu concluded.

The play offs has been moved by one day and will commence on Tuesday June 7 till Saturday June 11.