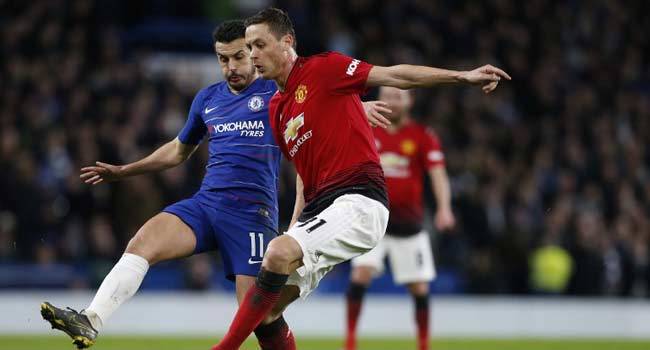 Manchester United midfielder Nemanja Matic will be sidelined for two weeks after being ruled out of Sunday’s clash against Liverpool.

Matic was a surprise absence from United’s team-sheet for the Premier League showdown with title-chasing Liverpool at Old Trafford.

United manager Ole Gunnar Solskjaer revealed the Serb was injured in training during the week, but didn’t specify the problem.

“He got injured during one of the training sessions a few days ago,” Solskjaer told MUTV.

“We tried to get him fit for the game but it wasn’t to be and he’ll probably be out for a couple of weeks. But we’ll manage without him.”

Matic was replaced by Scott McTominay in United’s starting line-up.

He could now miss United’s Champions League last 16-second leg against Paris Saint-Germain and key league games as they chase a top-four finish. 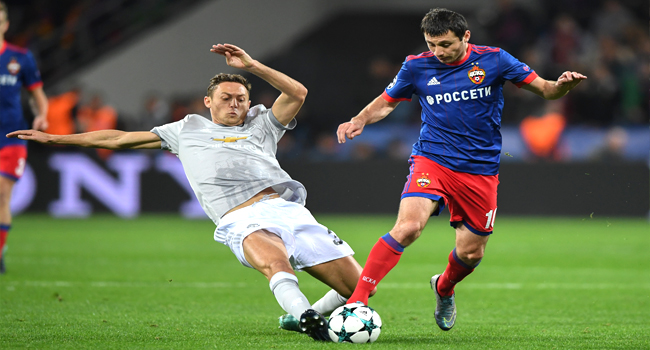 Nemanja Matic says Manchester United fans have not yet seen the best of him as he has been forced to play catch-up following a disrupted pre-season.

Matic joined United from Premier League title rivals Chelsea in the summer transfer window for £40 million ($53 million, 45 million euros) in a move that raised eyebrows, with many questioning the Stamford Bridge club’s decision to part with the player.

The defensive midfielder, who won the title with Chelsea last season, is staying level-headed despite United’s flying start to the season and says he has more to give.

“I didn’t have pre-season,” Matic said. “I trained alone. I can feel it in some parts of the game.

“My body is not ready yet and I have some difficulty, of course, but I try to hide that and to play simple. I will be better.”

United’s trip to Liverpool in a fortnight will be a better yardstick by which to measure United’s quality than their 4-0 drubbing of struggling Crystal Palace on Saturday that leaves them second in the Premier League table, behind Manchester City on goal difference.

However, United’s sixth successive win at Old Trafford this season in all competitions cannot be overlooked after poor home form cost them so dearly last term.

“As you know, we’ve won almost every game, we only drew at Stoke — in the Premier League it is very hard to do this,” Matic said.

“This can only be done by big teams, so we showed that we are a big team and we have to continue like this.”

United’s challenge has been made tougher by what manager Jose Mourinho calls a “long-term” injury to Paul Pogba, whose excellent start to the season came thanks partly to Matic’s contribution.

“Everyone knows that Paul is very important for Manchester United but we also have great players to play instead of him,” said Matic.

“We showed in the last few games that everyone in Manchester is ready to play and everyone can help us.” 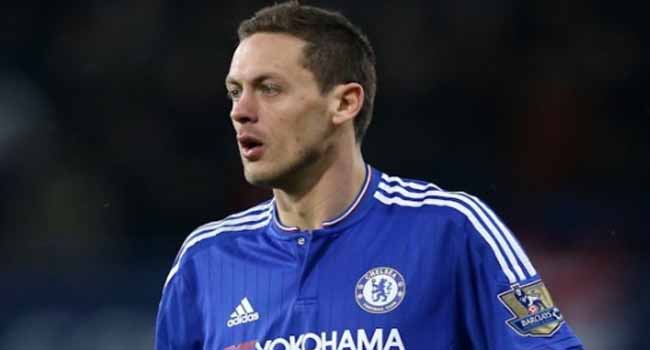 Chelsea midfielder, Nemanja Matic, has undergone a medical at Manchester United ahead of a £40-million move that will reunite him with former manager Jose Mourinho, British Media said.

The midfielder was pictured at the club’s Carrington road training complex on Sunday with media reporting that a deal would be announced on Monday.

It will be the second time that Matic, who turns 29 on Tuesday, has played under Mourinho.

The Portuguese first signed him when he was Chelsea manager, for £21 million in January 2014.

Manchester United are close to agreeing a £50 million deal to sign Nemanja Matic from the Premier League Champions, Chelsea..

The Blues midfielder has already agreed terms to make the switch to Old Trafford.

Mourinho admitted he was looking for two more signings thought to be a wide player and a defensive midfielder.

The Red Devils boss’s signing of Matic at Stamford Bridge in 2014 was seen as one of the key reasons they went onto claim the title. 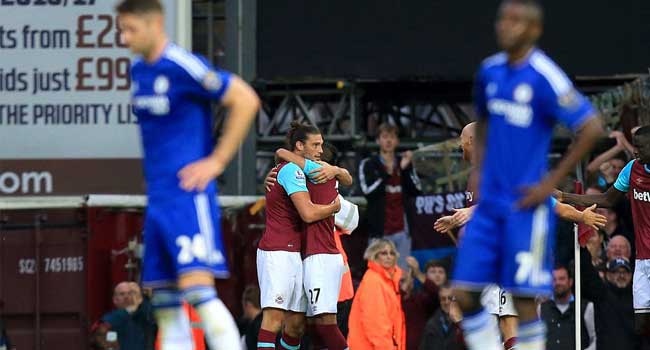 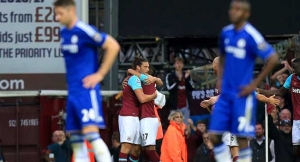 Jose Mourinho and Nemanja Matic were both sent off as Chelsea’s troubles deepened courtesy of a 2-1 loss at West Ham.

Argentine striker, Mauro Zarate, gave West Ham the lead in the 17th minute at Upton Park. The ball broke to the edge of the box following a corner, and Zarate drove into the corner past Asmir Begovic.

Kurt Zouma’s header appeared to have crossed the line for an equalizer in the 35th minute but goal-line technology showed that part of the ball was still on the line.

Things got worse for Chelsea in the 44th minute as Nemanja Matic was sent off for a second bookable offence.

Chelsea coach Louro reacted angrily to Matic’s sending off  and was subsequently sent to the stands as well.

Words later filtered to match commentators after Mourinho failed to retake his position at the pitch side that the Portuguese had been sent off too.

Nonetheless, 10-man Chelsea showed character to get a deserved equalizer in the 56th minute after Zouma and Cahill challenged for Willian’s corner, the ball falling kindly for Cahill to send home.

However, Andy Carroll emerged from the bench to powerfully head in Aaron Cresswell’s cross with 10 minutes left to inflict another damaging defeat on Mourinho and the Blues.

The defeat becomes Chelsea’s fifth of the Premier League season as pressure continues to mount on Jose Mourinho. 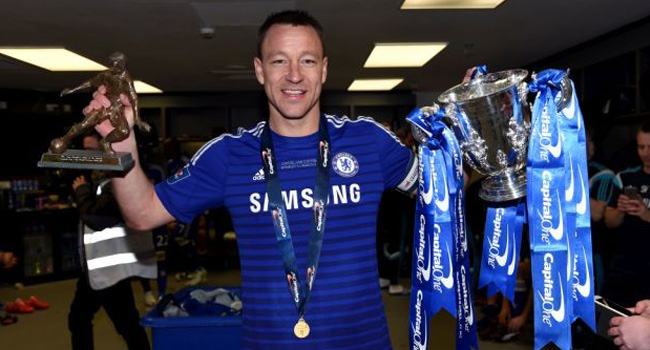 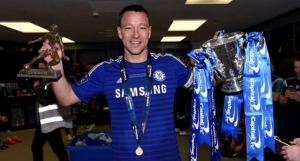 The Man of the Match in Chelsea’s Capital One Cup triumph, Captain John Terry, has been able to draw parallels with a decade ago as the current crop under the same manager quickly set their sights on more silverware this season.

Ten years after lifting his first Chelsea trophy, a very happy John Terry repeated the success but this time with the added bonus of his first cup final goal.

“This is the first one, it is massive,” he the Chelsea website.

“It meant an awful lot to us in 2004/05 in Jose’s first year here and it could be the start of something very good. Now we have to kick on with the League to focus on next but it’s a great day and a great win.

“I’m delighted with my goal and delighted with the team’s performance and lifting the trophy but you have to build on that. You have to set the foundations and we have done that, this is the first one and hopefully we can kick on.”

Terry, who also made his debut in the League Cup back in 1998, spoke about the strong desire among the current Chelsea crop to make history and the way they went about doing so at Wembley on Sunday afternoon.

“It is the start of something and we have to win trophies to be up there with some great sides, but we have won our first one now and in 2005 it inspired us and kicked us on and hopefully this will do the same.

“The pressure was there before the game but that is what cup finals do to you and I thought we handled the game very well.

“It was fairly even in the first half but we controlled it a little better in the second half and we are deserved winners.

“Spurs like to press, certainly in that first phase, so we tried to miss that out and get the ball into the front man a bit sooner which eliminated it a little bit, and I am delighted for Diego, he is in great goalscoring form and it is great to see him do it on the big stage as well.”

One of the game’s big talking points was Jose Mourinho’s solution to being robbed of the services of Nemanja Matic and needing to deal the Tottenham central attacking threat of Harry Kane with Christian Eriksen behind. The manager deployed Kurt Zouma further forward than normal with Gary Cahill and Terry paired in central defence.

“We did a little bit of work on it in the week and we shuffled it, so the manager does keep everyone guessing and on our toes,” said Terry.

“He said in the team meeting everyone has had a part to play in this competition and it is hard to leave some people out, but that is why he is the best because he makes good decisions.

“In this competition he made it very clear from the outset that we were out to win it and credit to the manager and the squad.

“The squad is moving in the right direction with some young players and hungry and experienced players as well, it is a great mix.

“A few teams over the years have written this competition off but it has always been close to my heart, and to be in this great stadium lifting this trophy is a really great feeling.”

It was the Blues skipper who fired his side into the lead against Tottenham to turn the Capital One Cup final tide against North London and in favour of the west, with the 2-0 win sealed when Diego Costa’s strike found the net and the Chelsea defence held firm.