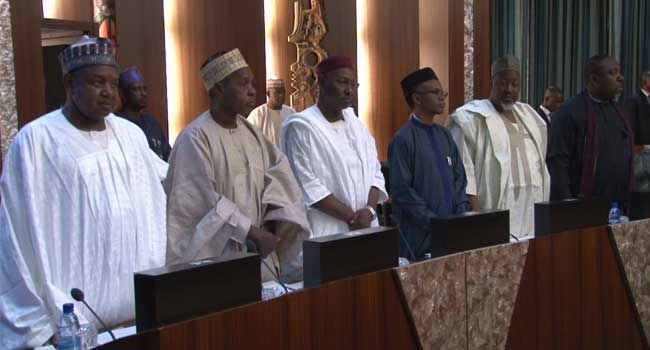 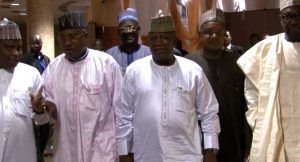 Nigerian governors have pledged to work with the federal government, especially in the area of agriculture to reverse the effects of the current economic recession.

This is part of the outcome of a meeting of the governors in the council chambers at the Presidential Villa in Abuja, with the Vice President, Professor Yemi Osinbajo presiding.

The governors who blamed the dwindling power supply in the country on gas pipeline vandalism, also commended the federal government on the plan to diversify energy sources through wind, and solar. 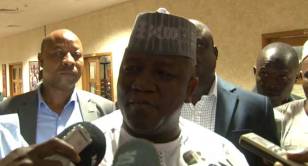 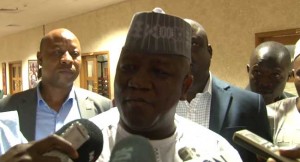 Meanwhile the Governor of Zamfara State, Abdullahi Yari, has dismissed the reported impeachment threat by lawmakers in his state.

The Governor, who spoke to State House correspondents after the governors’ forum meeting last night denied that there was such a move in his state.

He described what is happening in his state as democracy in practice, adding that he was in full control of the machinery of government and peace has returned to the seat of government.

The Zamfara State Government had earlier denied any impeachment threat against Governor Abdulaziz Yari by the state house of assembly.

The State Commissioner of Information Umar Jibo told Channels Television that he was not aware of any impeachment threat against the Governor but he knew that there were some misunderstandings between the two arms of government.

“I don’t have details of impeachment threat but there were some misunderstanding between the legislatures and the executive but with the intervention of elders the problem has since been resolved,” he said. 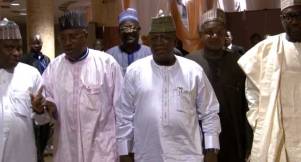 The Nigerian Governors Forum is to partner with Vodacom on how to improve health, education and agriculture in the country.

This is the outcome of the meeting the governors held on Wednesday night in the banquet hall of the Presidential Villa.

The meeting, which started about eight o’clock in the evening, had in attendance the governors of Ogun, Kaduna, Katsina, Zamfara, Niger and most deputy governors in attendance.

Speaking to State House correspondents after the meeting, the Zamfara State Governor, Abdullahi Yari and his Niger State counterpart said that it was important that they get support from service providers in the area mentioned.

They said that more information on how the states will benefit from the partnership would be unleashed in subsequent meetings. 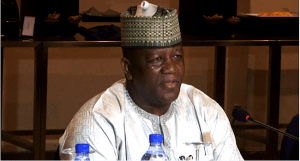 The Nigeria Governors Forum on Thursday asked the Federal Government to review the revenue sharing formula.

The governors insisted that what comes to them should be increased, stressing that states were the custodians of the natural resources in Nigeria.

The Chairman of the governors’ forum, Mr Abdullaziz Yari, disclosed this to State House correspondents after their meeting with President Muhammadu Buhari on the way out of the economic crunch the states were facing.

They lamented that a situation where some of them could not pay salaries of workers in their states was so embarrassing.

Beyond the bailout fund, the governors have listed a programme for the Federal Government to restructure the states’ economy in the short, medium and long terms.

According to Governor Yari of Zamfara State, President Buhari was said to have graciously accepted their demands.

He added that the President asked that a committee comprising the Vice President of Nigeria, Professor Yemi Osinbajo, and the Minister of Power, Works and Housing, Mr Babatunde Fashola, be set up to look into all the matters. 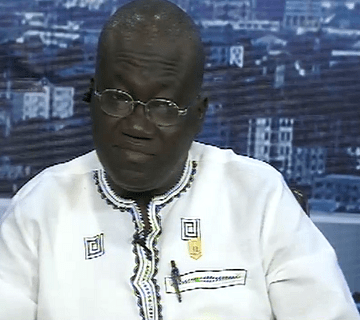 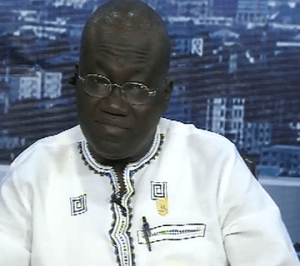 The Vice President, Nigeria Labour Congress, Isa Aremu, on Thursday informed the Senate that it had lost the confidence of Nigerian workers following its decision to move minimum wages issues from exclusive list to concurrent list.

“This ammendment by the Senate is done in bad faith, is an abuse of trust and the Senate has to do as much as possible to regain the confidence of Nigerians and Nigerian workers in particular,” Aremu said, while on Sunrise Daily.

The issue which had been debated for about a year had prompted the Congress to protest on September 19th, 2013 and according to Aremu, “the House of Reps understood the need to retain labour issues including minimum wage on the exclusive list of the constitution; But it was the Senate that was trying to push labour push to the concurrent list.”

He further recalled that Senate President David Mark had at the time assured the Congress that it was “better informed about labour position” which was that “labour issues should be retained on the exclusive list of our constitution, just as it has been since 1963 down to 1979, for obvious reasons”.

He noted that “labour is a factor of production and if you want to motivate labour for development, you must give them certain minimum environment to operate”, insisting that “minimum wage, minimum hours of work, minimum safety conditions in the work place regardless of whether workers are from private sector or public sector, or State or Federal”.

He emphasised that the Congress was insisting on a minimum wage system because “some employers will pay miserable pay” if such was not in place.

“If you don’t have minimum wage in place, some employers, especially private sector (here we are talking of some Asian employers)- they will pay graduates, whether they are polytechnic or university graduates – N5,000.

“I think the whole idea is you must have minimum floor below which no worker will earn and the same thing applies for minimum hours of work.”

Aremu also claimed that governors who were pressurizing the lawmakers were self-serving and ill-informed.

“These governors who don’t want to pay 18,000 minimum wage, they are the ones using private jets. They even have private terminals now, for themselves.

“Also, the same governors have minimum pay for themselves” he said, noting that the same applied to senators.

“There’s a minimum pay for all of them so why do you want to apply this double standard to the working people. I think it’s ill-informed. It’s an abuse of trust and I hope the Senate will be able to reverse its position”. 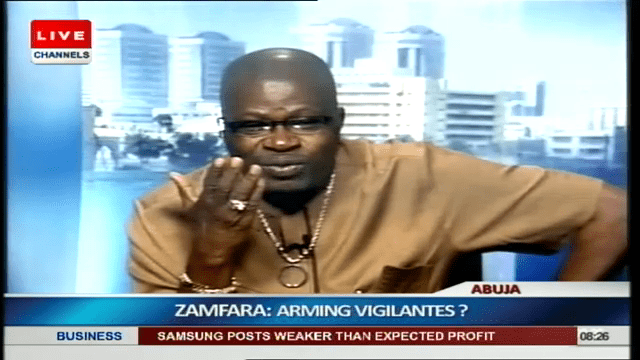 The panache of Nigerian governors to purchase private jets has been allegedly used to smuggle arms into the country without adequate inspection.

This was the bold revelation made by the Director General, National Task force on Illegal Importation of Light Weapons and Small Arms, Osita Okereke, on Channels Television breakfast programme, Sunrise Daily, where he stated that “they (governors) take private jets abroad, purchase arms and land in their state –no security man has right to search or search him because it is a governor’s item. You cannot stop, you cannot search them.”

Mr Okereke gave this remark over the availability of arms in Zamfara state which the state Governor plans to arm vigilante groups within the state, to address its insecurity.

According to Mr Okereke, the revelation from Zamfara is just the one we (the public) know.
There are many governors with so many arms in this country that the numbers of arms they are having is ‘uncountable’.

“There are so many of them in various states. These governors have brought in arms that are uncountable” he affirmed.

He further revealed that “we have marked so many states” but however failed to mention any of such state, saying “it is a security matter.”

He traced the plethora of arms to Governors who according to Mr Okereke, armed hoodlums with the guns.

“There are millions of arms in Nigeria” he said, adding that they (Governors) are already arming ahead of 2015 general elections.

He appealed that the government should provide the task force on Illegal Importation of Light Weapons and Small Arms, with Police, Army and budgeted funds because “we have informants all over the place and we need to pay them.” 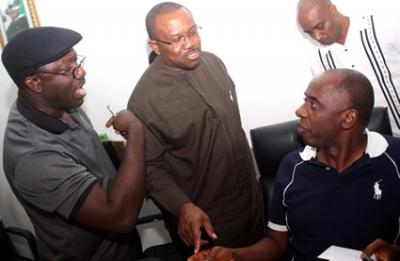 Following reports that the Nigeria Governors Forum (NGF) was poised to change its leadership, the Forum on Monday said it had put off the elections until May when the current Chairman, Rivers State Governor, Chibuike Amaechi’s tenure will expire.

This was a key part of the resolutions reached by the Forum after an emergency meeting in Abuja which lasted over three hours.

The governors said they were united and would not take any action against anybody.

It was a moment of relief for Governor Amaechi as some of his colleagues, especially those from the North, were said to be backing Governor Ibrahim Shema of Katsina State as his successor.

The decision to nominate Governor Shema as Mr. Amaechi’s successor was a fallout of the series of meetings by the northern governors at the Sokoto State governor’s lodge. 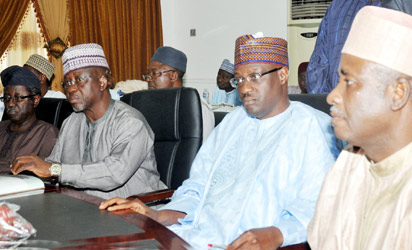 The battle line is drawn as Nigerian governors have vowed to proceed with their case on the excess crude account in the Supreme Court.

Last year, the Supreme Court fixed May 9th, 2013 for definite settlement report in the suit filed by the 36 state governors, challenging the alleged maintenance and illegal deductions from the Federation Account by the Federal Government.

There have been several unsuccessful talks since 2008 to reach amicable settlement outside the court but after rising from a marathon session that stretched into the wee hours of today, the Governors Forum has come forward to state its intentions.

The Forum criticised the attitude of the Federal Government on the matter, saying that it will not tolerate further adjournments on the case but will seek a final resolution of the matter from the Supreme Court.

This is one of the key resolutions reached by the Forum in its first meeting for the year which took place in Abuja, Nigeria’s Federal Capital Territory.

The Forum also agreed to hold a two-day retreat to deliberate on the current state of security of the country and lead in the on-going efforts to eradicate polio in the country. 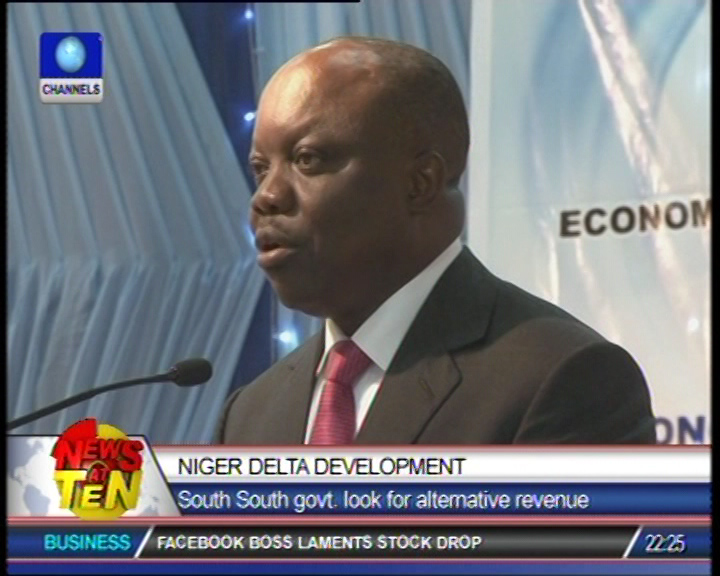 The Revenue Mobilization Allocation and Fiscal Commission (RMFAC) have been asked to design fresh strategies for addressing problems associated with the impact of oil exploration.

Delta state governor, Emmanuel Uduaghan, explained that his administration had already taken the initiative by using oil revenue to develop other sectors of the state’s economy.

He also renewed the demand for 50% oil revenue derivation for oil producing states which he said will go a long way in helping the communities affected by oil spills.