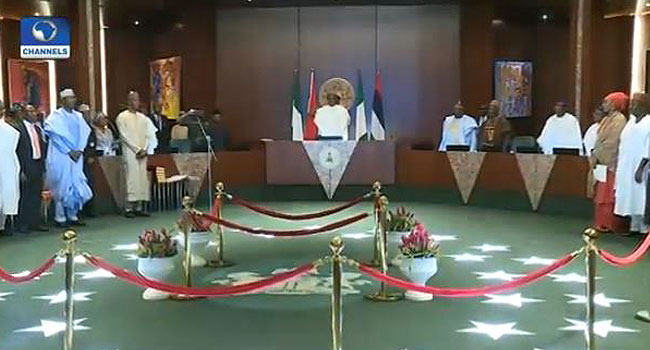 President Muhammadu Buhari and his Vice, Professor Yemi Osinbanjo have arrived the venue for the swearing-in of ministers-designate.

Upon the arrival of the President and his Vice, the national anthem was rendered and the proceedings of the day got underway.

The swearing exercise is coming a day after the Presidential Retreat for ministers-designate ended.

President’s spokesman, Femi Adesina, said the retreat ended with a charge from his principal to the ministers-designate to rise to the challenging responsibilities of ministerial office. 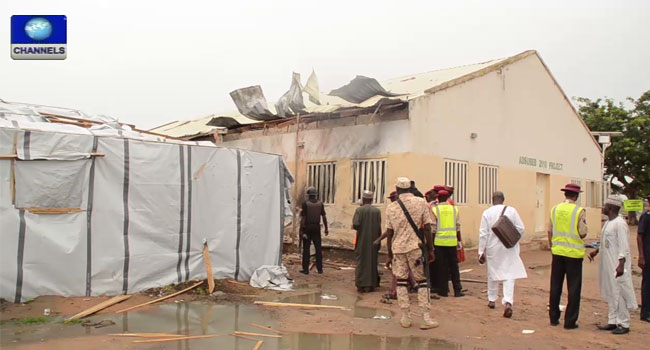 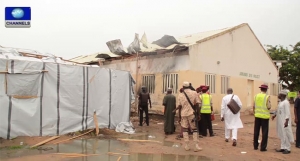 Nigeria’s Vice President, Professor Yemi Osinbajo has welcomed the offer of support from Ambassadors from several nations who are based in the country in the rehabilitation of the nation’s devastated northeast.

In a meeting on Monday with several Ambassadors, heads of mission and diplomats from the United States, Japan, Turkey, Canada, Australia and eight European nations, the Vice President thanked the envoys and their countries for their attention to matters of the north-east.

He also commended them and the so many international bodies and agencies who have acted and expressed their wishes to offer assistance.

The Vice President said the issue of the rehabilitation of the northeast was a “matter close to the president’s heart”.

A statement by the Vice President spokesman, Laolu Akande, said Professor Osinbajo also pointed out that he was also very active in the overall coordination of the efforts.

According to him, the coordination of the rehabilitation plans is now the critical issue, expressing the expectation that the envoys would work with the Presidential Committee on the North-East (PCNI) headed by General T.Y. Danjuma.

He explained that the PCNI was now the new structure President Muhammadu Buhari had put in place to coordinate the efforts, clarifying that the PCNI now encompasses the Presidential Initiative on the North East, which was the former body in place.

According to the statement, the PCNI now also includes the Victims Support Fund, VSF, headed by Danjuma and Safe Schools Initiative formerly in the federal Finance Ministry.

Professor Osinbajo added that his office would actively and directly be involved in overseeing the new structure in addition to his office’s responsibility to supervise the National Emergency Management Agency, NEMA, another active agency in the process.

The group of ambassadors called “Like-Minded Ambassadors on support for the North-East” was led to the meeting with the Vice President by the United States Ambassador, Mr James Entwistle, who expressed the interest of the international community to partner with the Federal Government in the rehabilitation and reconstruction of the North East zone of the country destroyed by the Boko Haram insurgency.

“The group was at the State House to meet with the Vice President, to compare notes and make sure that we understand each other on the scope and size of humanitarian challenges and how we can coordinate when the time comes for the internally displaced to go home,” the United States Ambassador to Nigeria told reporters.

He also said the group had come to discuss the upcoming workshops and seminars and for the diplomats representing different countries to know areas where they could help, as some of them were already helping.

The Ambassador/Head of the European Union Delegation in Nigeria, Mr Michel Arrion, also said that the EU had set aside a trust fund he described as a basket fund, from which funds would be drawn to offer assistance, especially in addressing the root causes of crisis in the Sahel region.