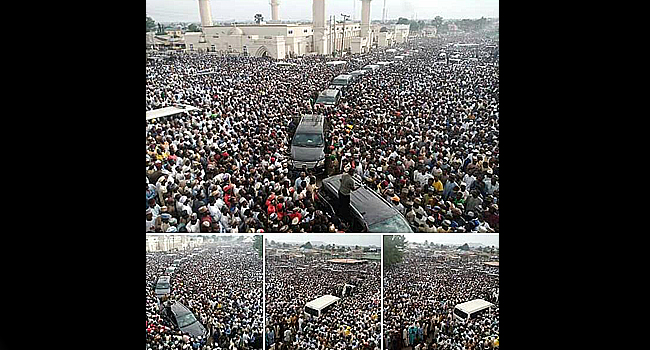 A group called the Anap Foundation Think Tank has called on the Presidential Task Force on COVID-19 to take urgent action against those breaching public gathering protocols.

The group in a statement jointly signed by the Chairman, Atedo N. A. Peterside CON; and Vice-Chairman, Abubakar Siddique Mohammed on Wednesday, said this in reaction to the large crowd that showed up at the burial ceremony of the Emir of Zazzau, Alhaji Shehu Idris.

The group lamented that while the outpouring of emotion evidenced by the huge crowds was understandable, it was evident that all public health rules were forgotten.

Thousands of sympathizers attended the funeral prayers of the late Emir of Zazzau on Sunday, at his palace in Zaria, Kaduna State.

He was buried inside the palace near the graves of his predecessors, after he died at the 44 Nigerian Army Reference Hospital in Kaduna following a brief illness.

The Anap Foundation Think Tank, therefore, called on the PTF, the Kaduna State Government, religious and political leaders, to urgently put in place clear strategies to prevent a recurrence. Read the full statement below.

(The Anap Think Tank) thanks the Almighty for the long life and reign of the revered Emir of Zazzau, Alhaji Shehu Idris and condoles with the government and people of Kaduna State, Nigeria generally, and all his subjects, on the Emir’s passing.

The Anap Think Tank witnessed with deep concern the reports of the events surrounding the death and burial of the Emir in Zaria this week.

While the outpouring of emotion as evidenced by the huge crowds that spontaneously assembled around the palace is very understandable, given the high esteem in which the Emir was held, it was evident that all public health rules were forgotten.

This leaves room to ask what government could have done to anticipate and mitigate the risks such an assembly must raise in this period of pandemic.

The Anap Think Tank acknowledges the efforts of Kaduna State and its leadership in the area of nonmedical interventions especially in encouraging social distancing, hygiene and wearing of face coverings. We acknowledge the leadership by example set by its government.

This, however, makes the question more pertinent. If in a State where genuine efforts have been made to limit the spread of the disease in the community this dangerous event nevertheless occurred, then it highlights further the key importance of the authorities’ preparedness.

We therefore wish to flag this issue as one that the Presidential Task Force on COVID-19 (PTF) should urgently address and put in place clear strategies to prevent such a recurrence.

The country is increasingly witnessing numerous incidences of social events where COVID-19 protocols are not being followed and a renewed clarification by the PTF would not be amiss at this time. We call on the PTF, the Kaduna State Government, and all concerned especially civic, political and religious leaders to take active steps to safely manage the crowds that are even now trooping daily to the palace for condolence visits.

As we watch the world slip in varying degrees into a steep second wave of infection, this is not the time for Nigeria to relax in her efforts at controlling disease spread. Behaviour Change Communication (BCC) is still our best remedy.

Radio jingles, posters, cartoons, information in the lorry parks, village squares, markets, schools, churches and mosques must be disseminated. The effort to achieve change in social and individual behaviour will need to be long-term and sustained.

Security and law enforcement personnel should also have regular re-training and clear guidelines on how best to anticipate and manage large social gatherings.

Nigeria is beginning to relax its lockdown further as schools resume, and public places of entertainment and worship have reopened to different extents.

This is the time to ensure that in those places and in those gatherings appropriate protocols are strictly adhered to. Covid-19 Still Has No Cure.

BCC remains our strongest weapon against COVID-19. We raise this issue now as the PTF’s continuous silence on this matter of large gatherings, such as witnessed in Zaria, is inappropriate given the need for their continued clear leadership at this present time. 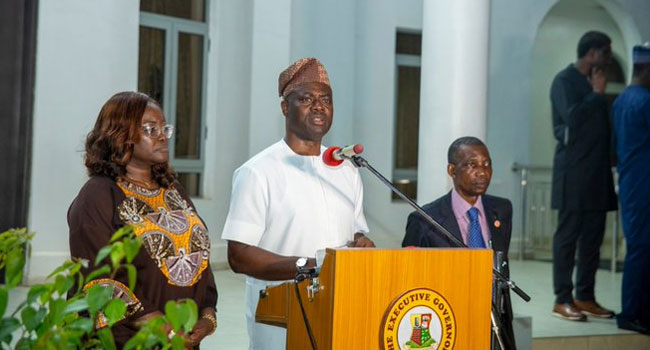 Oyo State Governor Seyi Makinde has placed a ban on the public gathering of more than 30 people and ordered all public and private schools in the state to be closed until after the Easter celebration.

The governor gave this directive in a public address on Monday following the confirmation of the first case of COVID-19 in the state.

He also announced the postponement of scheduled events including the Nigerian Mining and Geosciences Summit and the Agribusiness Summit in the state.

“I am obligated to place a ban on gatherings such as religious services, weddings, parties, burial ceremonies and so on, gatherings should be limited to 30 persons or less. Nightclubs will have to remain closed. These measures will be reviewed in two weeks.

“I have already directed that all public and private schools in Oyo State should be closed until after Easter. The ongoing workers’ verification exercise has been suspended. The Free Health Mission has also been suspended.

“All returning expatriate staffers in the state are presently in isolation and are being monitored,” he said in the address.

The governor also stressed that the COVID-19 pandemic will affect the state socially, economically and spiritually and urged residents to practice proper hygienic, social distancing and stay at home.