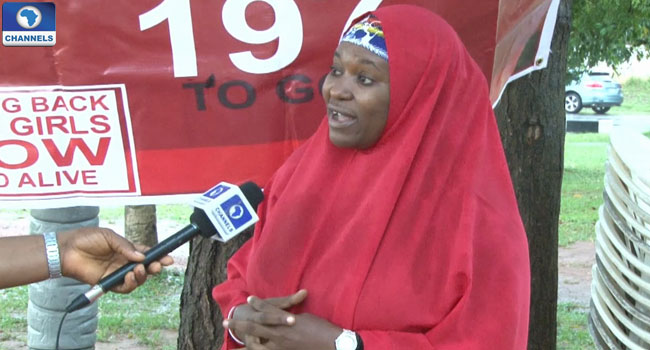 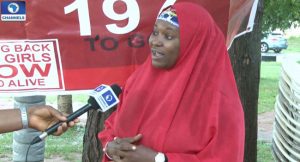 The Bring Back Our Girls campaign group says it will continue to keep the government on its toes to ensure that the full rehabilitation and re-integration of the 21 released Chibok girls.

The girls who were students of the Government Girls Secondary School in Chibok were abducted on April 14, 2014 by members of the Boko Haram terrorists group.

They regained freedom on Thursday, after the government secured their release through negotiation.

Speaking with Channels Television at the usual sit out of the group on Sunday, a co-convener of the group, Aisha Yessuff, said the group would monitor to ensure that the promises made to the girls such as re-integrating them into schools were fulfilled.

The group also called on international organisations who had pledged their support in the past to ensure that they help the Federal Government in the rehabilitation of the girls.

“What we are assuring Nigerians is that we will not allow the government to shift from its responsibility.

“It is the responsibility of the government to ensure that they get the right education that they can.

“BBOG can help in whatever way it can to ensure that they get that right education,” she promised.

Mrs Yessuff, however, pointed out that now that some girls had regained freedom, it was time for the government to come in and help rehabilitate the girls.

The government had promised that it would secure the release of the other girls still in captivity.

It had also promised to rehabilitate the released girls.

While efforts continue to ensure that other girls are released, the Minister of Information and Culture, Mr Lai  Mohammed has warned Nigerians to avoid reckless analysis that could jeopardise the chances of securing the girls’ release.

He made the demand on Sunday during a thanksgiving service organised for the released girls where they were also reunited with their parents. 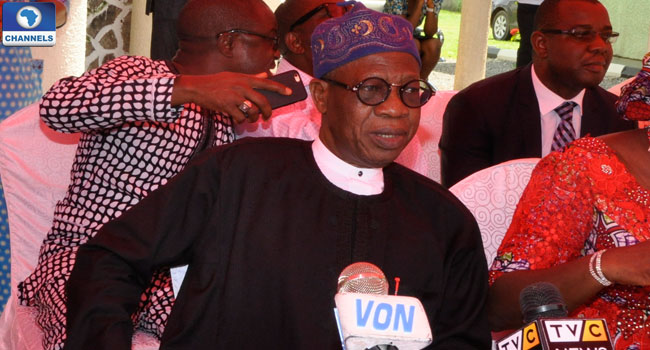 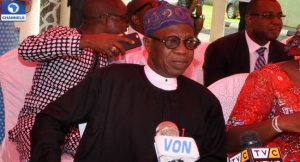 The Nigerian government has appealed to commentators and analysts to refrain from making statements that can jeopardise the release of other Chibok girls who are still in captivity.

The Minister of Information and Culture, Mr Lai Mohammed, made the appeal on Sunday in Abuja at a special thanksgiving Church Service and reunion of the 21 recent released girls with their families.

The Chibok girls were released on Thursday after over two years in the custody of Boko Haram terrorists.

“They are many reckless analysts and commentators who are not helping the situation. We still have many of our children in captivity. Therefore, we have to be careful with the kind of comments that we make. We must not make comments that will make the release of these girls difficult or impossible,” he said.

Mr Mohammed, who quoted from the Scriptures – those who are with us are more than those who are with them- said those who doubted the sincerity and commitment of the present administration to the safe release and the reunion of the abducted Chibok girls with their parents were disappointed.

“When the President said that the Boko Haram saga will not be closed until all the girls abducted have been released and reunited with their families safely, those who doubted did not believe us so we thank God this day has come,” he said.

A New Life In Freedom

A statement by a spokesman for the Minister, Segun Adeyemi, said Mr Mohammed appealed to the parents of the girls who have not been freed to continue to exercise patience.

“This is the beginning and we are very optimistic that very soon another batch bigger than this will be released. I want to assure you that these negotiations are ongoing even as we speak,” he stated.

The Chairman of the Parents of the Abducted Chibok School Girls, Yakubu Nkeki, re-echoed the Minister’s plea by appealing to the people to stop spreading rumours, particularly on the Social Media, that would put the lives of the girls at risk.

He debunked some reports alleging that 18 of the 21 freed girls were pregnant even as he denied that the girls were radicalised by Boko Haram.

Mr Nkeki thanked President Buhari for summoning the courage and the political will that eventually led to the release of the abducted girls.

In her testimony, the spokesperson of the released girls, Miss Gloria Dame, who recalled their ordeal in captivity, thanked God and all those who made their safe release and reunion with their families possible.

Miss Dame, who spoke in Hausa, prayed that God would ensure the safe release of the other girls still in captivity.

“We never thought we will ever see this moment but God has made it possible for us. I want to appeal to all of us to fast and pray for the safe release of those left behind,” she said.

Dr. Shiktra Kwali, who delivered the sermon at the thanksgiving service, told the girls that as they start a new life in freedom, they should not allow the experience of the past to weigh them down.

Several ministers of God, including the President of the Church of Brethren in Nigeria (EYN), Reverend Joel Bilili, offered prayers for the girls.

The high-point of the occasion was the reunion between the parents and their daughters.

Tears flowed freely as parents took turns to identify their daughters, while one woman simply strapped her daughter to her back in happiness.

The ceremony ended with an identification parade, as each of the freed girls identified her parents who in turn made brief comments, with many of them praising President Buhari for ensuring the safe release of the girls 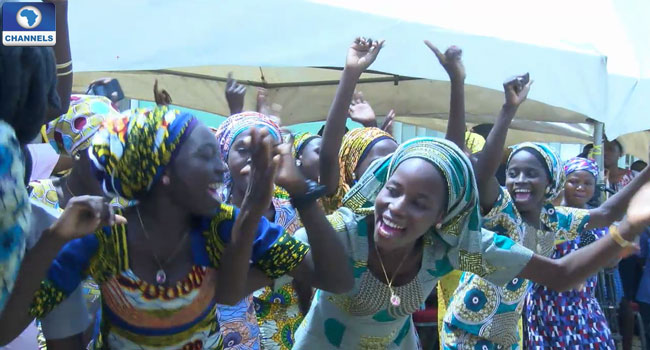 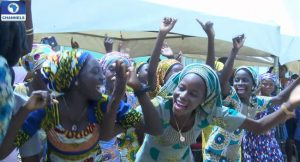 The 21 Chibok girls released from the captivity of Boko Haram militants during the week have been reunited with their parents.

The rescued girls were reunited with their parents during a thanksgiving service held on Sunday in the nation’s capital city, Abuja.

Speaking at the church service, the Minister of Information Mr Lai Mohammed, announced that “the Federal Government is negotiating with Boko Haram for the release of the remaining Chibok Girls”.

It was an atmosphere of celebration, with the girls singing and dancing, thanking God for their release.

At a point, one of the girls took the microphone and sang thanksgiving songs and the others joined her in the merriment, serenading the environment  with a feeling of joy and relief.

For over two years they have endured captivity in the hands of Boko Haram terrorists.

Their freedom last Thursday took the world by surprise.

One of the girls, Gloria Dame, who spoke on behalf of the group in Hausa, said they were grateful to be alive.

After her speech, the service continued, with a priest delivering words of encouragement to the girls.

In his sermon, Dr. Shiktra Kwali told the girls that as they start a new life in freedom, they should not allow the experience of the past to weigh them down.

Midway into the service, however, the parents of the girls arrived and not minding the downpour, the girls on identifying their parents ran to embrace them.

From Tears To Dancing

Tears flowed freely and emotions were visible, as the parents finally reunited with their children.

With calm restored, the mood changed from tears to dancing of joy among the parents and their children.

Some of the parents of the released girls shared their feelings about the return of their children.

The Minister of Information, Mr Lai Mohammed, assured them that the government was working for the release of the remaining girls.

Over 200 girls were taken from their school’s dormitory on April 14, 2014 by members of the Boko Haram terrorist group.

Their abduction triggered wide-spread protests globally, popularising a “Bring Back Our Girls” slogan.

Less than 40 of the girls have been rescued so far.

“We can confirm that 21 of the girls were released, safely, to us by 5.30 this Thursday morning and they were flown to Kaduna from the location of their release.

“This is the most glaring manifestation to date of the unwavering commitment of Mr President to secure the safe release of the girls and reunite them with their families.

“It is also a result of the round-the-clock efforts by the Administration to put a closure to the sad issue of the kidnap of the girls,” he stated.

After they were released there were speculations that their release was secured through a swap deal, but the Minister of Information also dismissed the claims.

He said that their release was based on confidence and not a swap arrangement with the terrorists group.

In fulfilment of a promise to rehabilitate the girls, after the celebration on Sunday, the girls were, however, not handed over to their parents. They are to remain with the government for some time for further medical assistance and counselling.

The government had said it would begin an immediate rehabilitation of the released Chibok girls.

Vice President Yemi Osinbajo announced the plan after seeing the girls at the Department Of State Services (DSS) office in Abuja on Thursday.