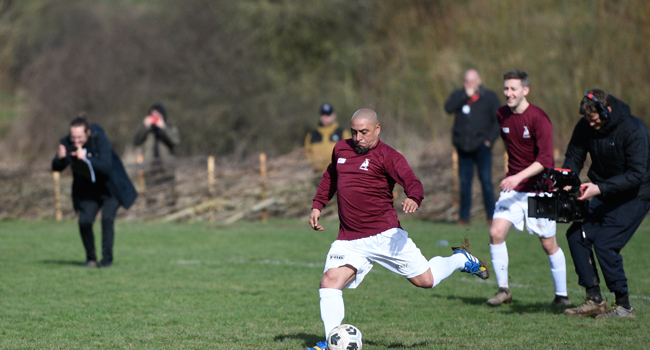 Brazil and Real Madrid great Roberto Carlos will get a taste of English grassroots football when he turns out for a pub team on Friday.

The 48-year-old retired full-back will appear for Bull in the Barne United in Shrewsbury, western England after the team won a charity “Dream Transfer” raffle on eBay in January.

Carlos is set to be involved as the team face fellow Shrewsbury and District Sunday League side Harlescott Rangers in a friendly.

The Brazilian, who won the World Cup in 2002, most recently had a brief spell in India with Delhi Dynamos in 2015.

“I’ve heard that the team’s been down a number of players this season so here’s hoping my training is enough to help them up their game and bring what Bull in the Barne’s fans want to see.”

Bull in the Barne manager and goalkeeper Ed Speller said: “Roberto Carlos is one of those legends who’s inspired so many young players’ love of the game.

“My jaw absolutely dropped when we found out Bull in the Barne won the Dream Transfer and he’ll be playing alongside the team in Shrewsbury.

“It should be a right laugh for him to come see what we’re made of, with some tense free-kicks and hopefully no dodgy tackles.”

Money raised from the raffle has gone to Football Beyond Borders, a charity that helps disadvantaged young people.

Nigeria and Wigan Athletic playmaker Victor Moses has resolved to move to Chelsea even when there were claims that the deal has been knocked off.

Wigan became the first casualty of the Stamford Bridge club over the weekend with a 2-0 defeat with new man Eden Hazard assisting in both goals while Victor Moses kitted up for his club Wigan Athletics against his dream club on Sunday as Wigan boss Roberto Martinez insisted the Nigerian forward’s future ‘would no longer be an issue’ before the transfer window closes as it has been settled.

Meanwhile, there intense monitoring of Victor Moses’ game by Chelsea management in Sunday’s game and Moses displayed beautifully enough to make Chelsea even more intent on adding Moses, 21, to their recent transfers with the likes of Eden Hazard and Brazilian ace Oscar.