Nigeria is strengthening its ties with Australia on enhancing law enforcement. The Economic and Financial Crimes Commission and the Austrailian Federal Police signed a memorandum of understanding to that effect, with the expectation that it will secure relationships between both agencies.

Chairman of the crime fighting commission, Mr. Ibrahim Lamorde, who signed the MoU on behalf of the commission, noted the need for an easy flow of communication between the both law enforcement agencies without “bureaucratic bottlenecks”.

Mr. Larmode said the MoU will enable the exchange of infromation and intelligence, as well as enabling joint operations where necessary.

The EFCC boss said the two agencies “will continue to help each other in terms of capacity building”.

Representative of the Australian Police, Mr. Richard Stanford, said his team’s mission is to identify threats against Nigeria, especially from radical Boko Haram sect and other organised criminals.

Stanford said the EFCC has been in the forefront, assisting Australian victims of economic crimes by investigating, arresting and prosecuting the culprits, including repatriating the proceeds of the crimes back to the victims in Australia.

According to reports, the the bomb blast which occurred on Thursday caused pandemonium in the area as residents fled the scene of the attack.

Two policemen were feared dead in the attack, the report stated, but further details of the attack are yet to be revealed.

It recently carried out one of its deadliest strike on Kano, northern Nigeria’s largest city, claiming over 185 lives in multiple bomb blasts and gun battles on 20 January.

Security authorities in Lagos on Saturday said that the ban on the use of military stickers in cars will henceforth be strictly enforced.

This was disclosed by the Commandant of the Airforce Base, Ikeja, Air Commodore Tony Omenyi who said the ban follows the abuse of Nigeria Airforce stickers.

He said from now on, the Police have been empowered to remove the Airforce car stickers on any car that it is affixed on; adding that all those who have it on their cars should remove them immediately.

Also speaking on the same issue, the Nigerian Army Brigade Commander, Brigadier General Pat Aken gave an update on the ban by the Army on the use of its stickers, saying the ban is not restricted to stickers but anything that creates a false impression of belonging to the force.

“Anything that creates the impression that one belongs to the Army is banned even for serving personnel. Lagosians should note that anybody parading himself with a sticker is a fraud and would be sanctioned accordingly”, he said.

Clamp down on aliens in Lagos

Meanwhile, the Police in Lagos State said it will soon clamp down on illegal aliens in the State in a move to help check the current influx of the aliens into such highbrow areas like Ikoyi and Victoria Island.

The State Police Commissioner, Umar Manko who disclosed this while briefing Government House Correspondents on the outcome of the State Security Council Meeting chaired by the state governor, Babatunde Fashola at Lagos House, Marina said the security agencies are monitoring the influx of the illegal aliens.

Mr Manko added that for those who are not Nigerians the security agencies will take action in accordance with Nigerian laws. He said that the security agencies including the Immigrations are collaborating on this and urged the citizens to continue to remain vigilant and be law abiding, adding that they should also avail themselves of the Emergency toll free numbers of 767 of 112 when in any distress situation and to pass useful information to security agencies.

On how the Police intend to maintain security in the state, despite the banning of checkpoints, the Police Commissioner said what the Inspector General of Police directed was not that there should not be Police presence on the roads but that Police should remove barriers on the road.

He explained that barriers are different from not finding Police on the roads, adding that the barriers which have been removed and remains removed have been replaced by motorized patrols and foot patrols.

On efforts to curb the recklessness of okada riders in the state, Mr Manko said any close observance of the activities of the State Police Command along the Ikeja axis in the last four to five days will show that the Police have been impounding most of the motorcycles that flout the law.

He said the Police Command has discovered of recent that the okada riders have been using them to commit crimes, stressing that this is a situation which the State will not tolerate.

The Lagos State government is cracking down on religious activities within its secretariat, demolishing three mosques and relocating churches in the state secretariat in Alausa, Ikeja over the weekend.

According to reports, Governor Babatunde Fashola of Lagos State said the decision was made for security reasons. He said the recent spate of bombings and attacks on religious institutions made it necessary to safeguard the secretariat.

He asked worshipers to use the central mosque and the secretariat chapel for their prayers.

Three mosques, those close to the ministries of justice, finance and environment were completely demolished to rubble; another mosque behind the state Public Service Commission, PSC, was not demolished, but was locked away.

Reports say Muslims who worship at the affected mosques and are also members of the state executive council had made efforts to sway Fashola’s decision, which they deemed anti-Islam, but their pleas went unheeded. 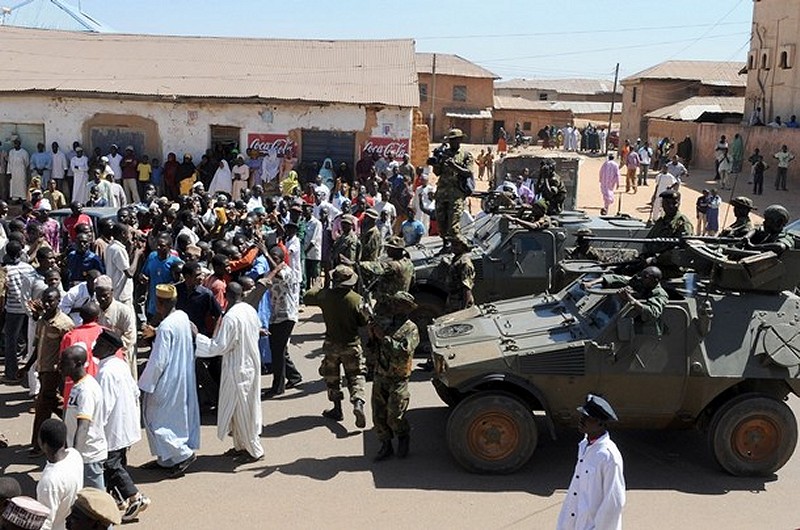 Suspected members of the dreaded Islamic sect, Boko Haram on Wednesday clashed with members of the Joint Task Force (JTF) in the Abaganaram ward of Maiduguri the Borno state capital leaving one soldier injured.

The injured soldier was rushed to the University of Maiduguri Teaching Hospital (UMTH) by the JTF patrol vehicle and admitted at the Accident and Emergency (A&E) and Intensive Care Units (ICU) of the hospital at 9.35am.

Five vehicles and six tricycles destroyed were also destroyed in the clash.

Military spokesman Lt. Col. Hassan Mohammed said suspected Boko Haram members detonated a bomb Wednesday morning at about 7.30am at a roadside shop around the Customs Bridge area in the city of Maiduguri.

He said though no one was hurt, the explosion destroyed some cars in the area.

OTHER ATTACKS IN ADAMAWA

Reports from the Adamawa state police command says the attackers, who were described as unknown gunmen went into the Demsa police division and opened fire on the policemen on duty and a cross fire ensued.

The gunmen were said to have killed one police corporal, identified as Lukman Abdullahi while the police equally killed one of the attackers.

Adamawa state police public relations officer, ASP Altine Daniel who confirmed the incident disclosed that the police station which was attacked late in the evening on Tuesday was not destroyed adding that the riffle of the deceased police officer however was taken away.

According to the reports, the suspects were hauled in by security operatives during a routine patrol of the creeks of Southern Ijaw local government area of the state.

Lt. Col Timothy Antigha, spokesman of the Joint Task Force, confirmed the reports and said the suspects were arrested at Onyeregbene, Lasugbene and Igbomaturu communities.

He said: “in line with its mandate to eradicate the menace of crude oil theft, illegal refining of petroleum products and illegal oil bunkering, the Joint Task Force, Operation Pulo Shield have arrested 7 suspected pipeline vandals in Onyeregbene, Lasugbene and Igbomaturu communities, in Southern Ijaw Local Government of Bayelsa.

“The arrests were effected during a routine patrol on 28 January 2012.”

Antigha said the items recovered from the suspects, include a generator set, pumping machine, 8hp Outboard engine, a pumping valve, a speed boat, and N42, 010,00 among other personal effects.

He added, “the items the suspects were found with are the usual used in vandalising pipelines before crude oil is siphoned.

“In the light of the negative effect of pipeline vandalism on the economy and environment, the JTF implores the general public to continue to cooperate with the agency by promptly reporting suspicious elements in their midst to facilitate the close monitoring of such individuals to forestall the perpetration of crimes.”

Once again, in a festive season, parts of the country have experienced unnecessary bloodletting by a group, whose objectives are not in consonance with any genuine religious tenets.

The latest mindless and cowardly attacks by Boko Haram members specifically directed at churches were pre-meditated. Only last week five Improvised Explosive Devices (IEDs) had been recovered in five churches in Mubi alone in Adamawa State.

And out of frustration arising from pro-active measures taken by security agencies against their chosen targets, they decided to throw IEDs from a moving vehicle in the glare of everyone at unsuspecting members of congregation of St. Theresa Catholic church, Madalla, in Niger State at the close of the service.

Two of the criminals had been apprehended, caught in the action.

The Christmas Day Blast in Jos, Plateau followed the same pattern. The explosion in Yobe was also checkmated at the gate of the department of State Security Head of Office in Yobe after the vehicle carrying the bomb was stopped.

The criminals died in the explosion, unfortunately causing the death of three security operatives.

It is significant to note that Boko Haram’s major armory in Yobe was destroyed only last week. Yet another armory in in Kaduna and two in Kano were destroyed also last week, in addition to heavy casualties the sect sustained.

It is measures put in place by the security forces during this festive period that have so far checkmated a major catastrophic plan envisaged by Boko Haram.

We urge everyone in our various communities to go about their activities, remain vigilant and urgently report anything suspicious to security agents.

We renew our appeal to all Nigerians that this is not a fight between security forces and some dissident elements. It is a conflict between some misguided extremists in our midst and the rest of our society, because the victims are not confined to any ethnic boundary.

We must cooperate to fish them out. And because our cause is just and our collective resolve is stronger, together we shall prevail.