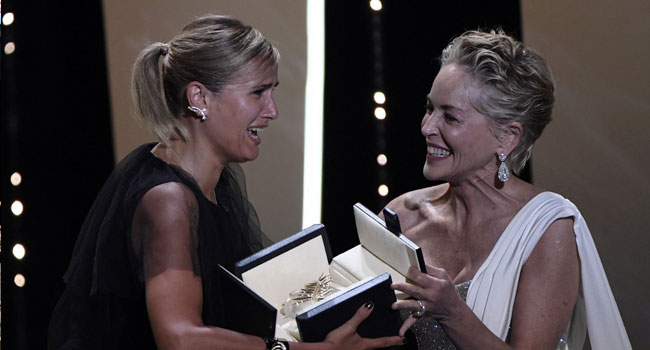 French director Julie Ducournau is only the second woman to scoop the prize, for a movie that was one of the wildest, sexiest and most violent ever shown at the Cannes film festival.

It tells the story of a young woman who has sex with cars, kills without a care, and pretends to be a boy despite being pregnant by a vintage Cadillac.

Lee, the first black man to lead the jury, read out the winner at the very start of the prize section, rather than introducing the first award of the night for best actor.

After an awkward pause and regrouping, the best actor award was given to US actor Caleb Landry Jones for his chilling performance in “Nitram” about Australia’s worst mass shooting.

Making a film about the Port Arthur massacre in 1996, in which 35 people died, triggered harsh criticism of director Justin Kurzel in Australia.

But critics were won over at the Cannes premiere, with Variety calling it a “devastating study of atrocity” that shows “quiet respect for the victims’ dignity”.

It was a huge night, too, for the previously unknown Norwegian actress Renate Reinsve, who was rocketed to stardom by her role in “Worst Person in the World”.

Her role as a twenty-something searching for her identity and pinballing through relationships was a sensation and caught the 33-year-old totally unprepared.

Sorry for ‘messing up’

When it finally became time to announce the Palme d’Or for real, Lee said: “I apologise for messing up.”

But then he almost fluffed the presentation again by announcing the winner rather than presenter Sharon Stone, by which point Ducournau was giggling in the audience.

She still broke into tears when the official announcement was made, and told the crowd: “This evening has been perfect because it’s been imperfect.

“Thank you for letting the monsters in.”

The only other woman to win the top prize is Jane Campion for “The Piano” in 1993.

The second-prize Grand Prix was shared between Iran’s two-time Oscar winner Asghar Farhadi (“A Hero”) and Finland’s Juho Kuosmanen (“Compartment No.6”), while best screenplay went to Japan’s Hamaguchi Ryusuke and Takamasa Oe for “Drive My Car”.

The race had been wide open this year, with critics pointing to many possible successors to “Parasite”, the South Korean hit which took home the last Palme in 2019 before making history by triumphing at the Oscars.

Last year’s festival was cancelled because of the pandemic.

There were doubts early in the festival about the Covid logistics, with some festival-goers grossed out by the spit tests required every 48 hours, and criticism on social media over unmasked attendees in the cinemas at early premieres.

Restrictions were tightened, partying scaled back, and even though the stars couldn’t quite keep themselves from hugs and kisses on the red carpet, the festival appeared to pass without a major outbreak.

But there was still plenty of star power.

Tilda Swinton was ubiquitous on the red carpet, appearing in five films of the official selection.

But Swinton was clear that her proudest moment was receiving the Palm Dog award on behalf of her three spaniels, who appeared with her in “The Souvenir Part 2”.

“Honestly, this is the prize to get,” she said at Friday’s canine ceremony, as she tied the red collar prize around her neck. 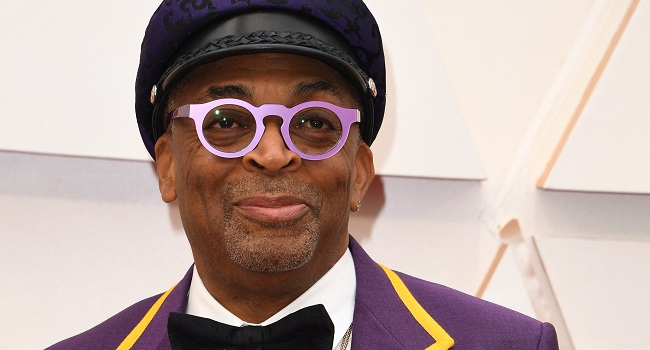 The multi-part documentary will be released to commemorate the 20th anniversary later this year of the coordinated Al-Qaeda attack on the World Trade Center that killed almost 3,000 people.

“With over 200 interviews, we dig deep into what makes NYC the greatest city on this God’s earth and also the diverse citizens who make it so,” said Lee, who is producing and directing the project.

WarnerMedia said in a statement the documentary would offer “an unprecedented, sweeping portrait of New Yorkers as they rebuild and rebound, from a devastating terrorist attack through the ongoing global pandemic.”

It added that the documentary will be released “later this year,” without specifying a date.

It will air on HBO and its streaming service HBO Max.

Lee earlier made a documentary for HBO on Hurricane Katrina. “When the Levees Broke” was released in 2006.

“(W)e treasure Spike’s singular capacity to chronicle and pay tribute to the human toll of these historic events while bearing profound witness to the strength and resiliency of the human spirit,” said Lisa Heller and Nancy Abraham, HBO’s co-heads of documentary films. 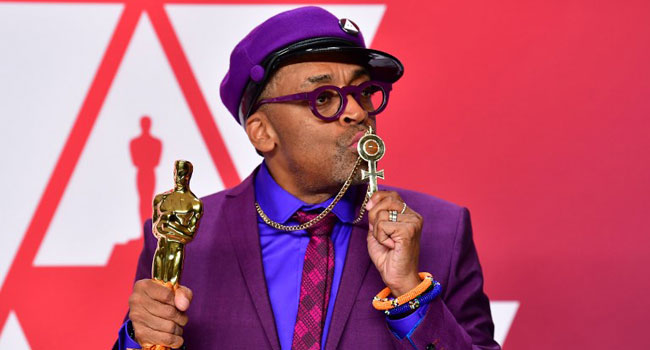 The audience erupted into applause for the 61-year-old who until Sunday had earned an honorary Oscar in late 2015 for his “extraordinary contribution” to film — but no other Academy Awards.

For more than 30 years, Lee has captivated audiences — and sometimes angered them — with his provocative, frank depictions of black America infused with his signature mix of entertainment, activism and rage.

“BlacKkKlansman” is a searing yet sometimes hilarious broadside against racism with the stranger-than-fiction true story of an African-American police officer who managed to infiltrate the highest levels of the Ku Klux Klan.

Lee — decked out in all purple with gold sneakers — jumped into the arms of presenter Samuel L. Jackson before accepting the award.

Lee got political, looking ahead to the upcoming presidential vote.

“It will be a powerful moment,” he said. “The 2020 presidential election is around the corner.”

“Let’s all mobilise, let’s all be on the right side of history. Make the moral choice between love versus hate,” he said. Lee was wearing rings on Sunday that bore the two words.

“Let’s do the right thing!” he concluded, referring to his acclaimed 1989 film about simmering racial tensions in New York’s Brooklyn borough.

“You know I had to get that in there,” he said with a smile. 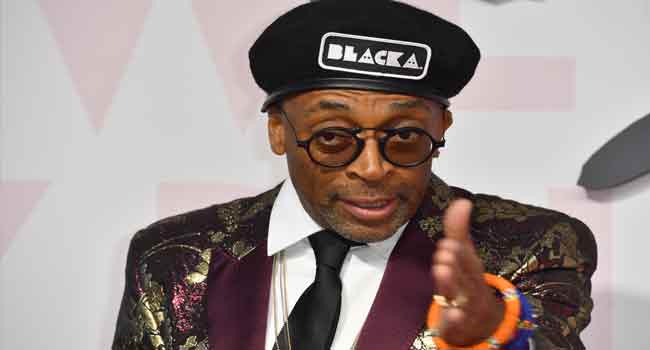 Spike Lee, whose new film “BlacKkKlansman” will premiere in Cannes on Monday, has captivated audiences for more than 30 years with his depictions of life in black America, infused with his signature mix of entertainment, activism and rage.

Lee first grabbed attention at the festival with his breakout feature, “She’s Gotta Have It” — shot in two weeks in black and white during the hot summer of 1985, in part thanks to his grandmother’s savings.

With that film, which won a youth prize at Cannes, Lee “broke the glass ceiling” for black filmmakers and “opened the doors for everybody who’s come after him,” says Michael Genet, an actor and screenwriter who penned the script for “She Hate Me.”

African-American director Ryan Coogler “couldn’t be who he is today with ‘Black Panther’ without Spike Lee doing what he did,” he adds. “It’s impossible.”

Lee — born Shelton Jackson Lee in Georgia on March 20, 1957 — was raised in Brooklyn’s Fort Greene neighborhood, where he filmed “She’s Gotta Have It” and which is still home to his production company 40 Acres and a Mule Filmworks.

A small man with a piercing gaze from behind his round glasses, Lee acted in that first film, taking the supporting role of motor-mouthed Mars Blackmon, one of the main character’s three suitors.

John Canada Terrell, one of his co-stars in the movie, described Lee as a “very strange, cerebral kind of cat.”

“Spike was always quiet. He kept to himself but I called him the idea man,” recalls Herbert Eichelberger, an associate professor of film at Clark Atlanta University whom Lee calls his mentor.

“He would come with all kinds of ideas about doing films and making certain kinds of approaches to a situation.”

“From the start, he was a good storyteller,” says Eichelberger, who thought Lee’s career would be focused on documentaries, given his keen powers of observation of society around him.

But Lee would embrace that format only once, in 1997 with “4 Little Girls” — the Oscar-nominated story of the racially motivated bombing of an African-American church during the US civil rights movement.

In the decade in between, Lee established himself as a force to be reckoned with, producing films with an often political bent like “Do the Right Thing,” “Malcolm X” and “Jungle Fever.”

Lee remained outside the usual Hollywood glare, mindful of keeping a hold on his own marketing, distribution and editing. His features starred mainly black casts.

“He wants to decide what he puts forth as his film,” said Eichelberger, adding that Lee usually only makes movies that he has written as well.

That allows him to tell the stories as he sees them, blending human relationships with social themes and dark humor.

“I said to him, ‘Why do you even worry about the writing?’ And he said, ‘No, Michael, I am a writer first. Always a writer first’,” Genet recalls.

‘We can’t be satisfied’

Today, Lee — a huge fan of the New York Knicks — is respected as a director of films with wide appeal that depict American society and culture with razor-sharp clarity.

“When we came back (from Cannes), the production had opened in New York City and I couldn’t walk on the street. It was a hit,” said Terrell, Lee’s co-star in “She’s Gotta Have It.”

That success catapulted Lee to unexpected stardom — he made a series of black and white Air Jordan ads for Nike, in character as Mars Blackmon and co-starring NBA legend Michael Jordan, that changed sports marketing forever.

Lee has made various other commercials and music videos over the course of his career.

He also has sometimes turned away from his usual films to direct more traditional Hollywood fare like the crime thriller “Inside Man” (2006) — one of his greatest box office successes.

But at 61, he is back to basics with his Cannes entry “BlacKkKlansman,” which is based on the true story of a black police officer who infiltrated the Ku Klux Klan.

“Between ’85 and today is like between day and night,” Lee told the Viceland program “Desus and Mero” in January when asked about the presence of blacks in cinema.

“But we can’t be satisfied. It’s not just making a film. We have to get in those gatekeeper positions so we have a say at what gets made.”